WTF is This? Bad Maps! 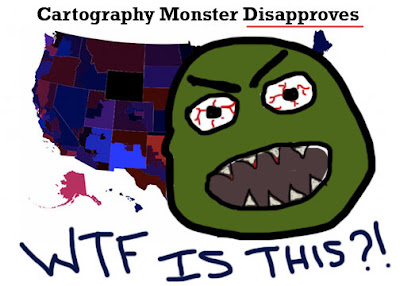 Here are some maps I dug up recently on the Internet that have earned the WTF IS THIS? Disapproval Rating from the Map Monster (the evil twin of the Map Monkey, or otherwise known as the voice of my conscience!). 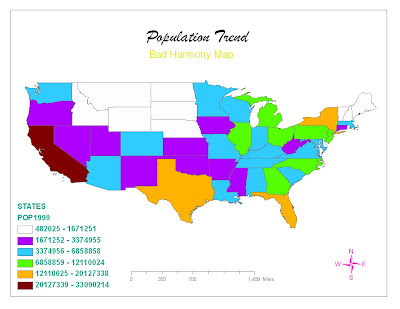 US Population Map by State
First of all, the projection is bad.  And the map-maker has committed the cardinal sin of producing a choropleth-looking map using absolute numbers, instead of ratios or percentages.  And the multi-color ramp is not intuitive, as it would be in a monochrome ramp – here the colors do not suggest an increase or decrease in magnitude.  Aqua is not inherently showing “more” of the variable than purple.  It would be nice to have some commas in the legend to help us read the numbers, too.  Seven or eight digits without commas or spaces just boggles the eyes.  There are no data sources, no scale, and a doofy-looking after thought of a north arrow floating in the white space.  Oh, my, says the Map Monster.  WTF? 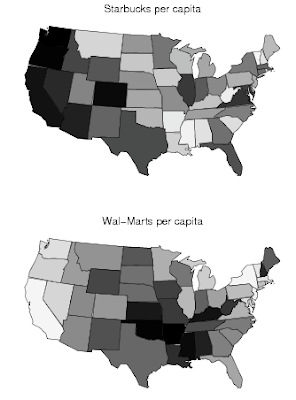 Walmarts and Starbucks per Capita by US State
This map has no legend.  We have no idea what the data ranges are.  Are they even the same data ranges for both maps?  It’s somehow hard to believe that California, Illinois, Florida, Virginia, and Colorado all have far more Starbucks per capita than Walmarts.  I’ll just bet the differences in data ranges might have something to do with this apparent anomaly! 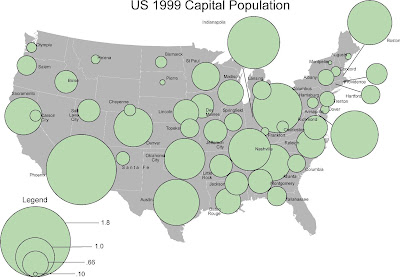 Bad Proportional Symbol Map
You can’t even tell which circle goes with which city!  They need a refresher course in labeling!  Some of the symbols cover the entire state!  And there are mysterious numbers in the legend – 0.1, 0.66, 1.8, etc.  What could this mean in terms of population? 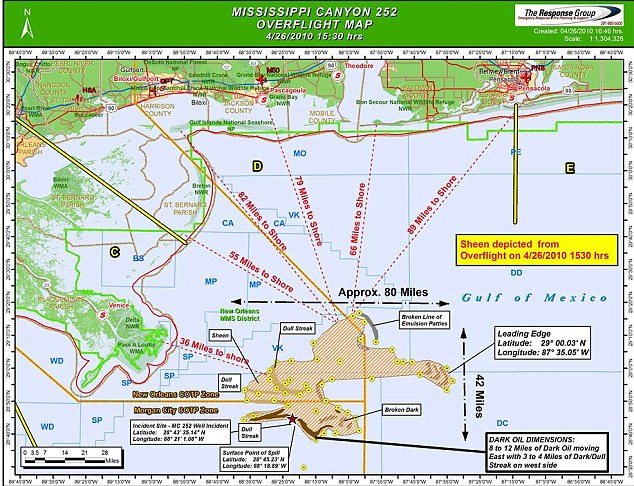 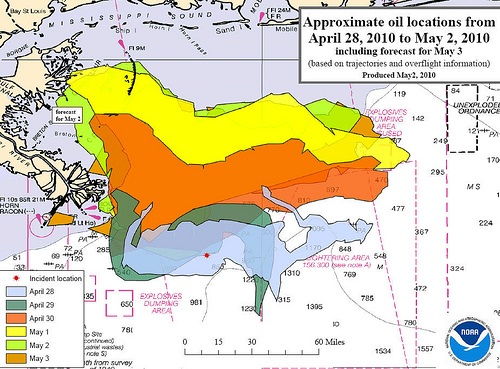 Bad NOAA Map (Gulf oil spill)
The same problem as with the Coast Guard map.  NOAA usually produces good, clear maps.  Not this one.  (We still love you, NOAA!)
“Fun task: Try telling where the oil is predicted to be on May 3rd on this map. Especially if you are red-green colorblind.  This shows why stacked, partly transparent polygons are a poor choice to show a multi-day event.  Bad stuff.” From Misguided Maps at http://misguidedmaps.com/ 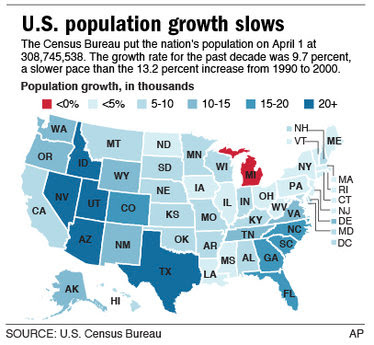 US Population Growth Map
This one is so bad.  We don’t know why the 0% growth states were chosen to be shown in bright red (when all the other states are shades of blue), and the data value classes overlap.  In addition, the legend ranges are given in percentages, while the map text states that the numbers reflect population growth, in thousands.  (I don’t think New York State’s population grew by 10,000 %, for instance!).
Courtesy of Cartastrophe at http://cartastrophe.wordpress.com/ 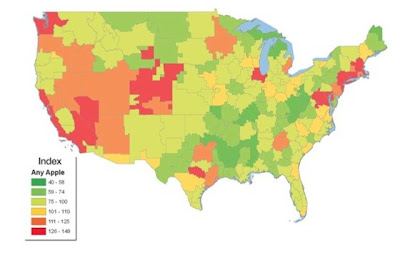 Apple Ranking Map
We really have no idea what we are looking at here.  What do the numbers in the so-called “Index” refer to?  Apple sales?  Apple quality?  Tons of apples produced?  What are the geographical divisions, the units of data aggregation?  They are not counties!  Maybe some apple market catchment area?  We can’t know!  And they’re not saying! http://smrb.com/web/guest/apple-market-ranker 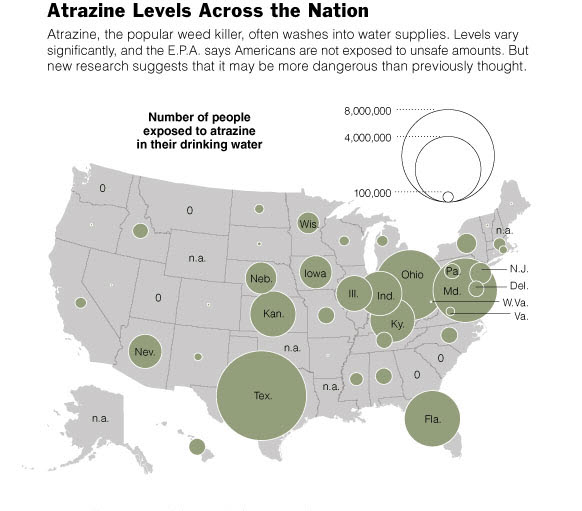 Weedkiller
OK, I’ll let you guys try to figure out what is wrong with this map!  And the very bad mistakes in labeling call into question the veracity of the rest of the data on this map.  HINT: Things are not necessarily where they should be! 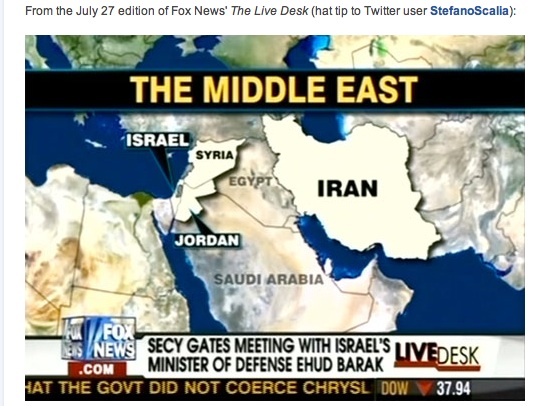 Fox News Makes a Map!  Even Dora the Explorer wouldn't have made THIS mistake! This infamous Fox News map was brought to my attention the other day by Andrew M., Kristen G., and Lesley P.  Another example of labeling gone wrong: when things are not necessarily put in the right place.  It's no wonder that many US kids are geographically illiterate - look how ignorant their elders can be (well at least the elders at Fox News! which hopefully are not TOO many kids' role models!) 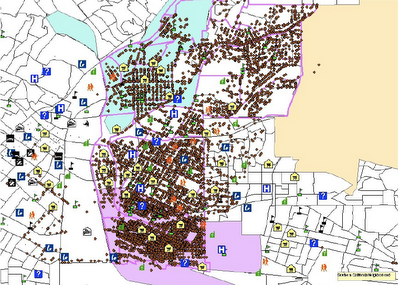 The "Too Many Symbols" Map
No legend, first of all.  No title, second of all.  I have no idea whatsoever what this map is supposed to be about.  Especially since many of the symbols appear to be out in the water.  IF the blue bits are water….

Change in Abortion Rate
Kids, don’t try this at home!  The "Exploding States" approach.  Can anybody actually interpret the data in this map?  And why is Alaska sitting directly on top of the Pacific Northwest states? 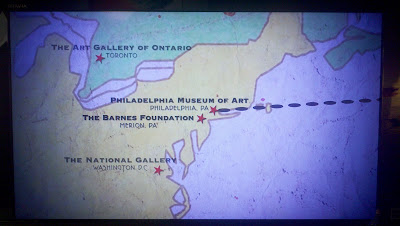 Art Museum Map
This is just a bad map – the resolution of the coastline is very coarse compared to the zoomed-in character of the map.  And the locational points are labeled with text that is way too large.  And what are those flying saucer-like elliptical blips? (photographed from a TV screen by Ms. Kristen Grady, ever on the look-out for strange maps!) 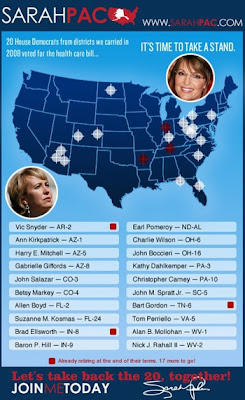 Sara Palin’s Target Map
Nothing cartographically wrong with this, in particular, really not a bad map, just a map in bad taste. 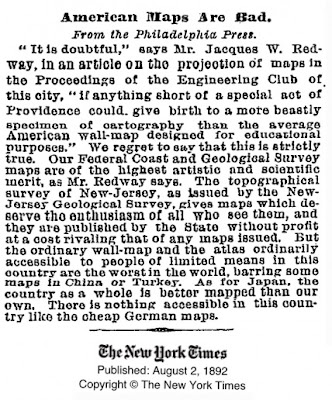 American Maps Are Bad
It seems that, as far as map-making goes, Americans have had a bad reputation for quite a long while! 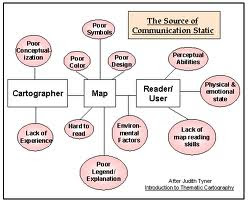 A diagram explaining the source of “Bad Map” problems, from Judith Tyner’s book Introduction to Thematic Cartography.  Take heed of good advice!  Know your data!  Know your audience!  “A clear map IS a beautiful map,” as the Map Monkey always admonishes.

If any of you have any additional critiques of the above "Bad Maps," or would like to add links to MORE bad maps, please leave a comment.
Posted by Map Monkey at 1:17 PM