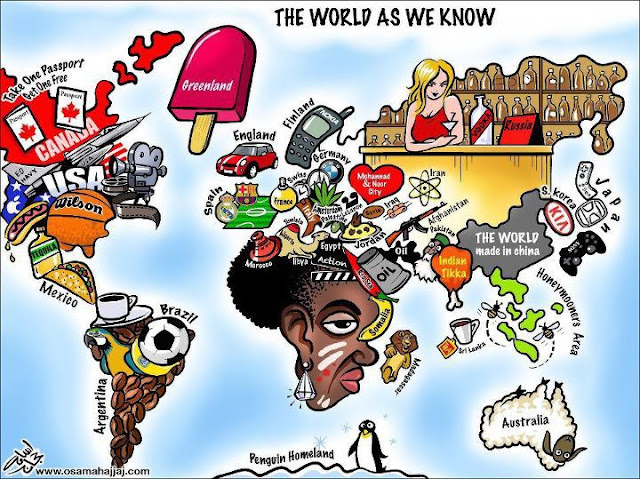 The World as we know it....
OK, here is something sure to offend just about everyone - stereotyping maps - you know, "The World According to Texans," or "The World According to New Yorkers," etc. Many of these pertain to one or another of the United States, or else how the United States in general views the world.  I tried to get a more balanced picture, but you know, that's one of the troubles with stereotypes - they're not very balanced!  So even the stereotyping maps seem to be mainly from the US perspectives.  If anyone has seen other ones, please let us know!  I am particularly interested in seeing a stereotyping map of the different regions of the UK.  I've always been aware of how different areas of the UK look upon other areas of the UK, but now that I live here, I find it is even more pronounced than I imagined! 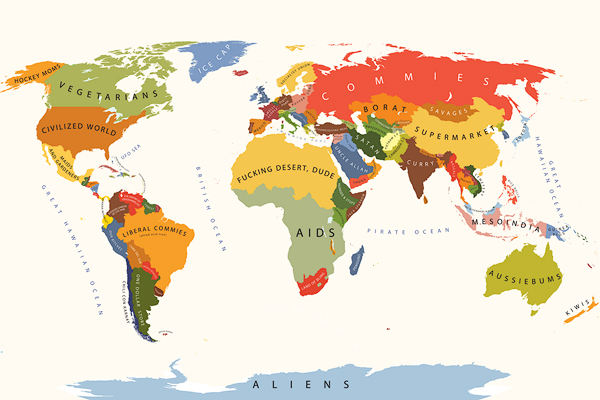 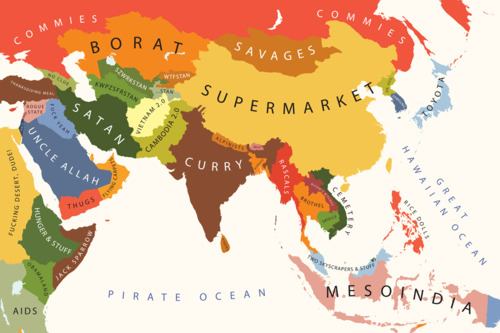 Detail of map above, showing Asia, as viewed by Americans 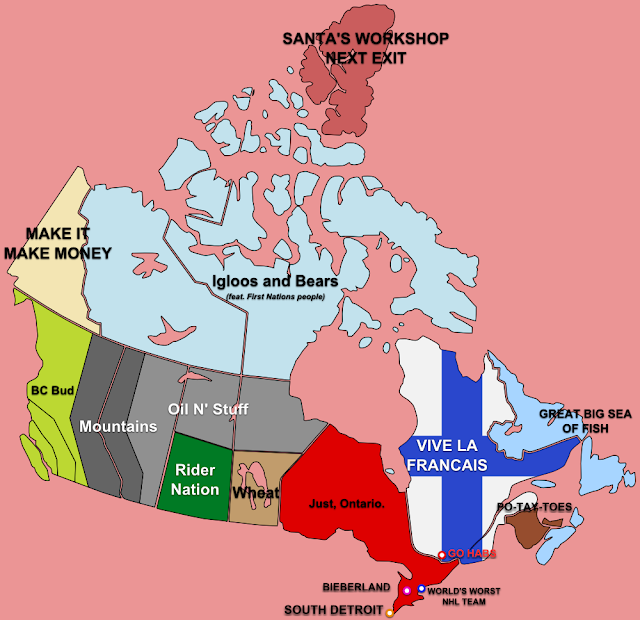 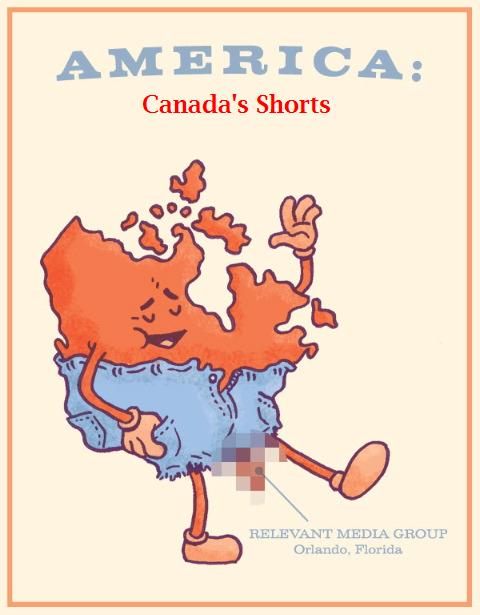 And, from the Canadian perspective: America is Canada's
shorts! 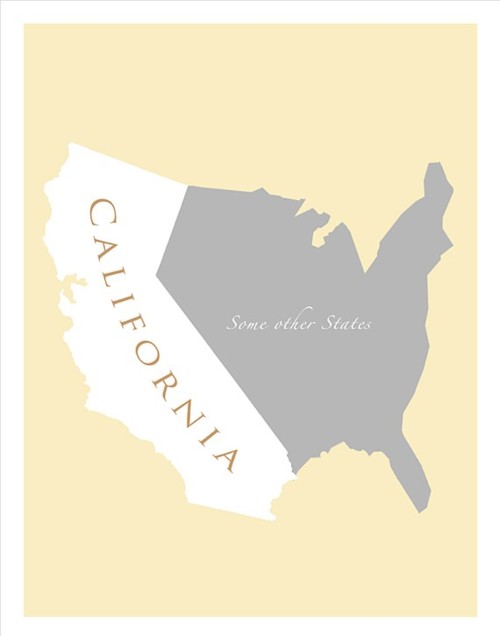 The US according to Californians 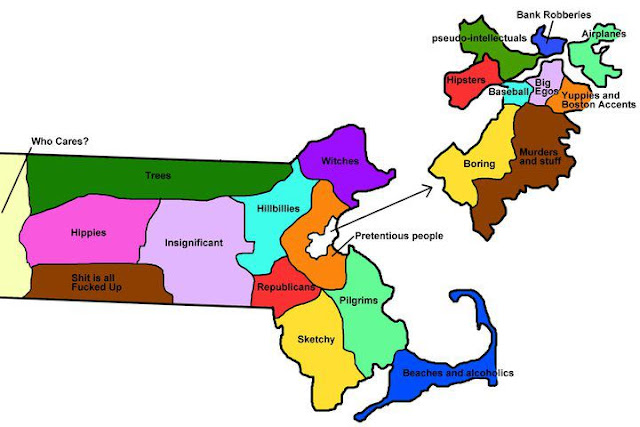 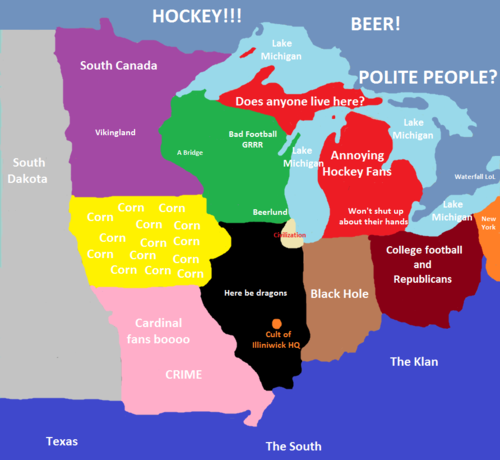 A Chicagoan's view of the Midwest 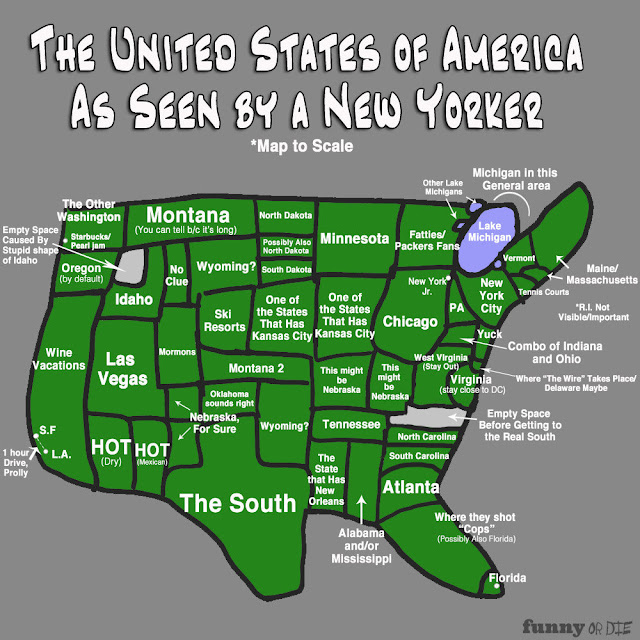 The US as seen by a New Yorker (most of us think NYC should be its own independent country, anyway, since we have so little in common with other Merkins. We look at the rest of the country from an anthropological view.) 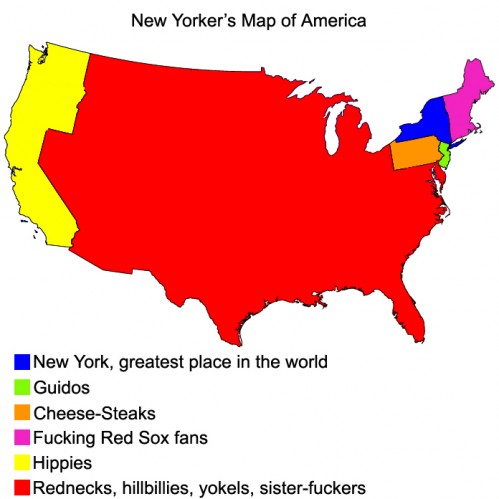 Another New Yorker view of the US 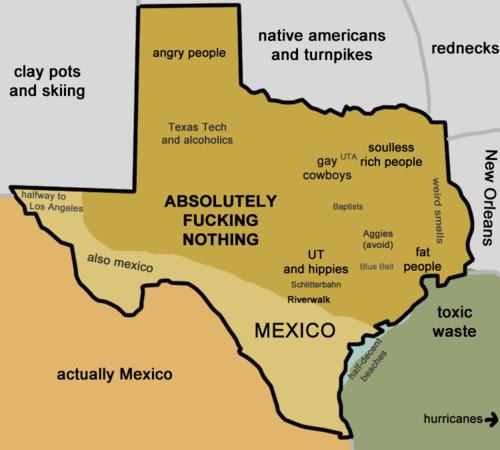 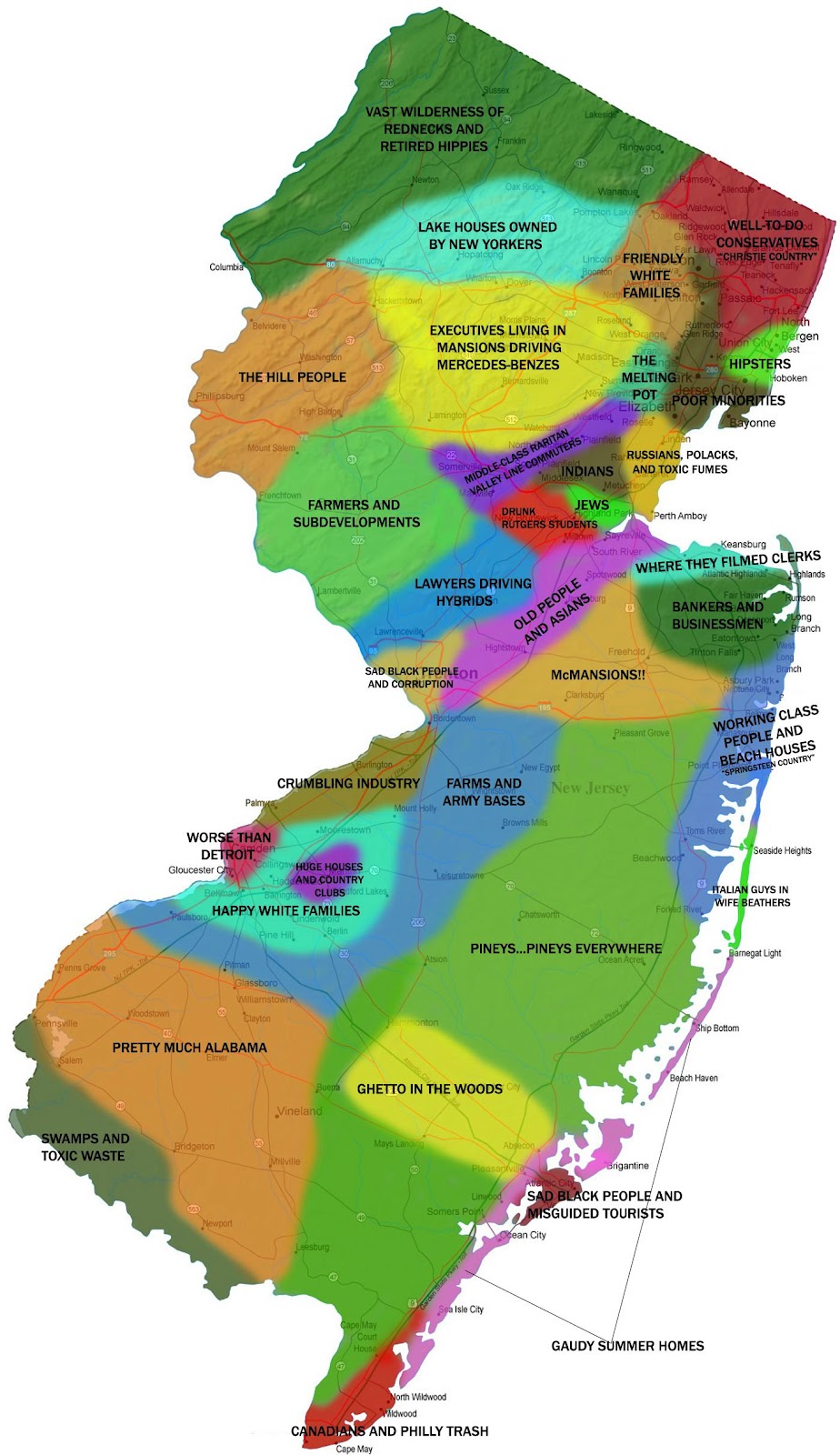 OK, this one has made the rounds (at least in my neck of the woods) and as they say, in every joke and satire, there is a glimmer of truth.  Need I say more.  And PS - I LOVE New Jersey!  My house is in the interstitial area between "lakehouses owned by New Yorkers" (yup, that's me), and "vast wilderness of rednecks and retired hippies" (yep, that's my neighbors and me, respectively). 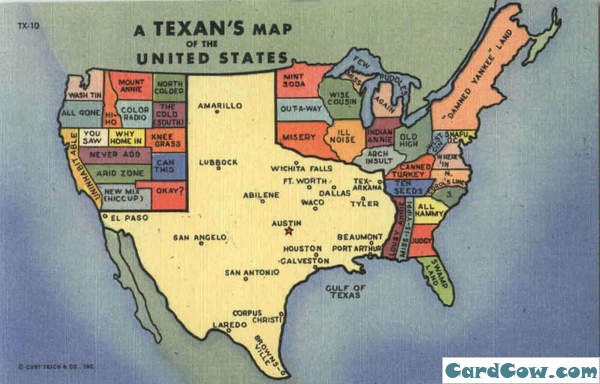 The US according to Texans 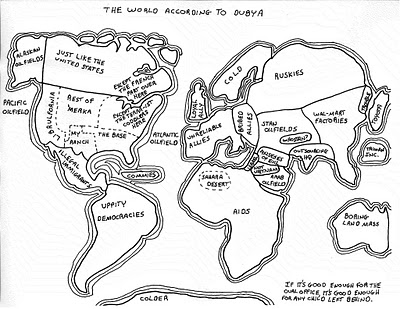 The World according to Dubya (That's George W. Bush) 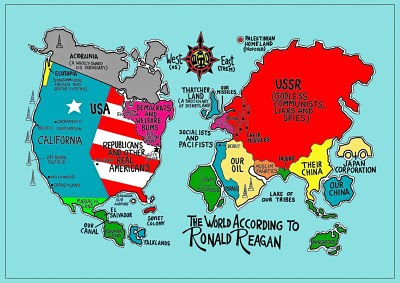 The World according to Reagan 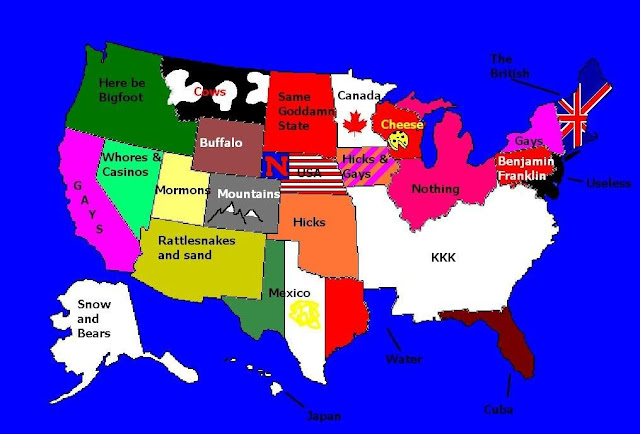 The US according to Rednecks 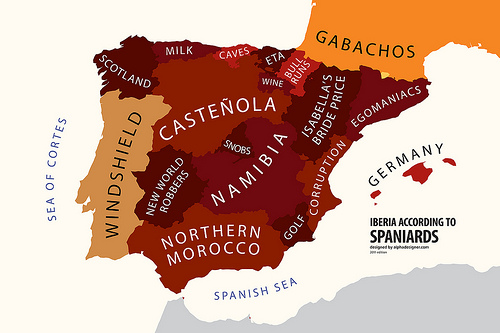 The Iberian Peninsula, according to Spaniards 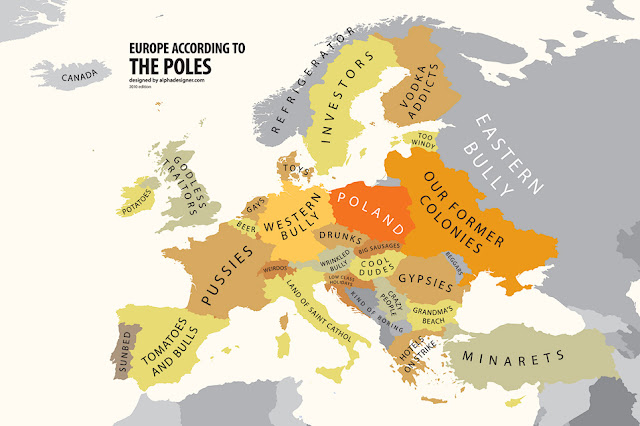 Couldn't resist adding another one from the Alphadesigner site. Europe, According to the Poles.


Of course, I am posting these maps with the huge caveat that MOST Americans, Texans, New Yorkers, etc., do not think in such a simplistic way about their neighboring states or other nations in the global community, and the maps are therefore quite fictional (well, perhaps all aside from the World According to Dubya! That one may bear some semblance to reality.  Only kidding, only kidding! Actually, though, I firmly believe that George W. Bush will go down in history). But the maps do poke fun at our prejudices and biases, and are meant to be more of an indictment against the viewpoint country than the country viewed.  What is being ridiculed or lampooned is the ignorance of the generalizing idiot, NOT the country being generalized about.
OK, so the moral of these maps?  Tribalism is alive and well in the 21st century.  Stereotyping is the easy, shorthand way of dealing with the complexities of the world, but not a very effective or accurate one.  However, on the bright side, it shows that the world is not a homogeneous bland place (yet!), and there are still recognized regional differences.  Now if only we could stop killing each other over those differences, and just appreciate them.