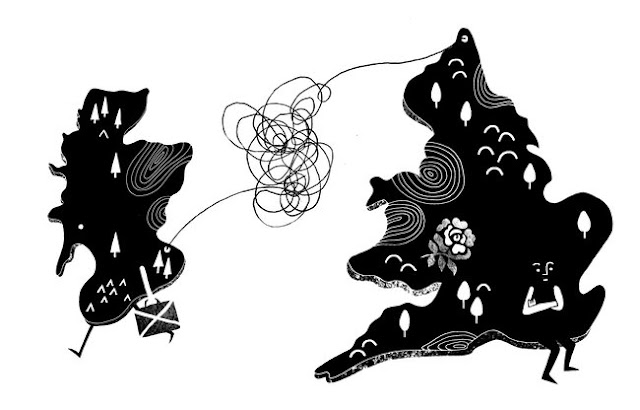 Will Scotland Go its Own Way?  From an editorial in the New York Times, February 26, 2012, by Neal Ascherson, from:  http://www.nytimes.com/2012/02/27/opinion/independence-for-scotland.html?_r=1&nl=todaysheadlines&emc=tha212 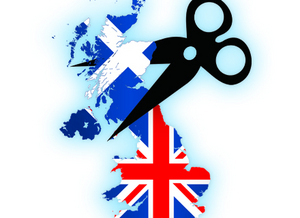 This Map of the Week, above, is really more of a cartoon, but I think it's very well-done and quite illustrative of the recent events in the U.K. regarding independence and cutting of historical (and at the time of Union, expedient) ties, but also unable to completely undo the entanglements of  the lengthy alliance. Hence the knot of string loosely and tenuously still connecting the two nations.  As some of you are aware, Scotland will soon have a referendum to decide whether to split with the United Kingdom and become a separate, independent nation once again.  The results of the referendum will have huge ramifications on the United Kingdom as a whole, on Scotland, and on all the constituent components of UK, especially Northern Ireland, and to a lesser degree, Wales.  There are many pros and cons to Scottish independence, and the debate rages on.  Recent headlines in The Guardian and other major UK newspapers reflect the diversity and the strength of the passions on the various sides of the arguments.
“Scotland can not survive without England.”
“England will be better off without Scotland.”
“UK would be 'financially worse off' without Scotland.”
“Would the UK collapse without Scotland?”
“A future without Scotland would be distinctly uncomfortable.” 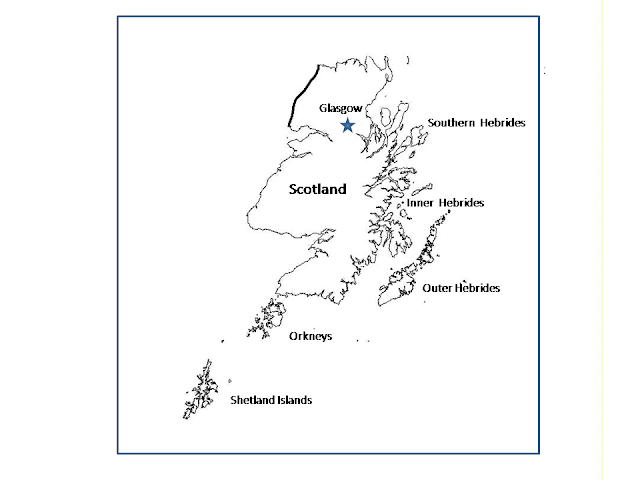 Map of Scotland, after a map in the 2005 book “The Stornaway Way,” by Kevin MacNeil, which is a punk-rock version of the coming-of-age novel, taking place in the 1980’s in Stornaway, the main port town of the Isle of Lewis, the largest of the islands in the Outer Hebrides.  As the author explains, “We do not live in the back of beyond.  We live in the very heart of beyond.”
“Travelling the world taught me not to hold the atlas the way it’s printed.  Everyone needs to learn their own way to hold a map.  For me the Island looks better upside down, with our blood relatives in Scandinavia to the left, our blood relatives in Ireland to the right.”
And to me, this brings up an interesting point.  IF (and that’s a big “if”) Scotland became an independent nation, which countries would it ally itself with?  Who would be its “natural” neighbors, which community of nations would it best belong to?  Would it be Gaelic-speaking countries, Nordic countries, Germanic countries, or the newly-minted (but already somewhat passe) conglomerate of the “North Atlantic Arc of Prosperity,” which includes Ireland and Iceland?  How about a Circum-Polar culture stretching across the North Sea?  There are logical rationales for any of these choices.  People in parts of Scotland still speak Gaelic, and are culturally close to Ireland and Wales.  Parts of Scotland were settled by the Scandinavians, the Scots language incorporates many Scandinavian words (mainly Old Norse) and sentence structures, and some of the far northern Scottish islands are geographically closer to Norway than to Edinburgh.  And the Scots language is quite closely related to many variants of German, including Dutch, Africaans, and Rhenish (as is English, of course). For more on the Scots Language, and why it is considered a separate language, see The Scots Language and its European Roots at http://www.scotslanguage.com/books/view/2/540 What is Scots? / Listen to Scots at http://www.scotslanguage.com/books/view/2/3169 and Regional Dialects at http://www.scotslanguage.com/books/view/8


So, when building nation-blocks, does it come down mainly to economic reasons, geographical proximity reasons, linguistic reasons, reasons of shared history, or cultural reasons?  Perhaps language may end up being an important, or even the deciding, factor.  The fact that the Scots language has now been recognized even by the UK government as a distinct and separate language and not just a variant (dialect, patois, or “accent”) of English, is significant.  On the last U.K. census, there was a question “Do you speak Scots?” and a helpful website called Aye Can, developed so that people could hear different versions of Scots as spoken, to help them figure out if they are, in fact, speaking Scots.  It was essentially a primer in the Scots language, basically saying, if you speak like this, you’re speaking Scots.

Linguists say that there are three distinct languages spoken in Scotland today: English, Gaelic, and Scots.  Scots Gaelic, of course, is closely related to Irish Gaelic, and is a Celtic language, part of a very old Indo-European language family which also includes Welsh, Breton (spoken in Brittany in France), Cornish (spoken in Cornwall, which of course used to be an independent kingdom), and Manx (spoken on the Isle of Man, still an independent country, more or less).  The last two are not yet considered “extinct” languages, but have very few native speakers anymore.  In ancient pre-Italic days (about 1,000 BCE), Celtic languages were widespread in continental Europe, from Belgium to Turkey and parts of Asia Minor, but especially in Gaul and the Iberian peninsula (Spain and Portugal), where Celtic influence is still apparent in the mountain music.  In Scotland today, Gaelic is spoken mainly in the Highlands and some of the more remote islands such as the Outer Hebrides and the Isle of Skye.
Most people in Scotland, even the Gaelic-speaking ones, also speak Scots.  Now, Scots and English share a lot of vocabulary, but they are about as mutually understandable as Portuguese and Spanish, or Norwegian and Danish.  In other words, closely related, but still separate languages.  http://www.ayecan.com/listen_to_scots/west_central.html.
If you would like a silly, but pretty hilarious perspective on the Scots tongue, take a look and listen to some of these old video snippets.  Some time ago there was a TV show in Scotland featuring an erudite “professor,” who came to Glasgow to study the Glaswegian language, and explain it to the rest of us.  Apparently it was actually a big hit amongst Glaswegians, who enjoy laughing a wee bit at themselves.
http://www.youtube.com/watch?v=IMnKPnPhhYw
http://www.youtube.com/watch?v=rGQItvUBhG4&feature=fvwrel
http://www.youtube.com/watch?v=a0rgETg2Hoo&feature=related
http://www.youtube.com/watch?v=JpVD5-IKAIo&feature=related
http://www.youtube.com/watch?v=52t1CWVTrLE&feature=related 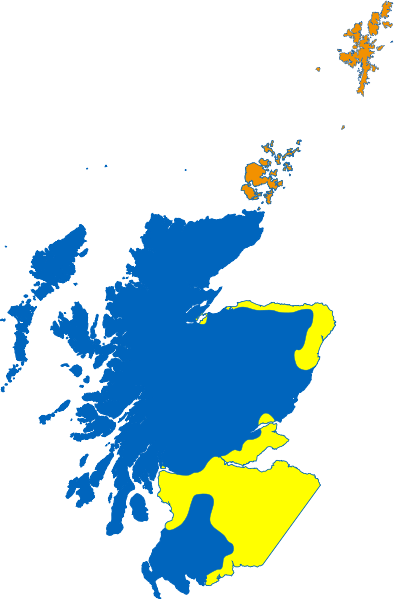 Languages of Scotland around the early 15th century, based on placename evidence.  Orange is Norn (an insular Scandinavian language, now extinct, but similar to Icelandic and Faroese. Remnants of Norn vocabulary and grammatical structure still exist as integrated into Shetland Scots and Orkney Scots), yellow is English/Scots and blue is Scottish Gaelic.


In any event, whole debate about whether or not Scots is a separate language or a variant of English is very illuminating, especially in light of the Scottish bid for independence from the U.K.  The editorial in The New York Times brings up some interesting points drawn from history.  The crux of the problem, the op-ed piece points out, is how the 1707 Union is interpreted differently by the English and the Scots.
“The English regarded the union [the 1707 Union which created the United Kingdom by joining England and Scotland] as irreversible; the Scots, then and now, regarded it as a treaty that could be modified or even ended by mutual agreement.”
And therein lies the rub….. 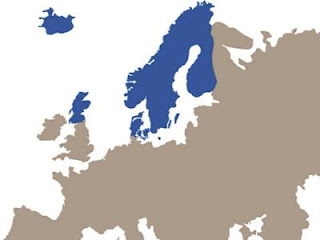 When Macbeth Met Hamlet: a Scandinavian Scotland?
“This map was taken from the Copenhagen Post, an English-language Danish newspaper.  The accompanying article mentions a few more similarities: both Scotland and Scandinavia harvest fish and renewable energy from the sea, both sides of the North Sea share some vocabulary (Scots call their children bairns, Norwegians and Swedes call them barn, Danes børn), and both have an outlook infused by similar brands of anti-hierarchical Lutheranism.  Significantly for a small nation considering independence: Scotland, Norway and Denmark all have about 5 million inhabitants. Small numbers don’t seem to be an impediment to successful statehood…. One final, crucial advantage of a Scandinavian over a British Scotland: it would no longer be in the Far North of the UK, but in the Southwest of the Scandinavia.  The place would not have to move an inch, but it would sound less cold, dark and at the end of everything.  Scotland’s new orientation could finally allow it to ditch some of the negative stereotypes that have been dogging it for far too long.  It would no longer be colder, emptier and darker than England.  It could be as socially sophisticated and as technologically advanced as Denmark or Norway.”  From:
http://bigthink.com/ideas/552-when-macbeth-met-hamlet-a-scandinavian-scotland?page=1
Posted by Map Monkey at 6:00 AM

Email ThisBlogThis!Share to TwitterShare to FacebookShare to Pinterest
Labels: Independence, Scotland, Union of 1707