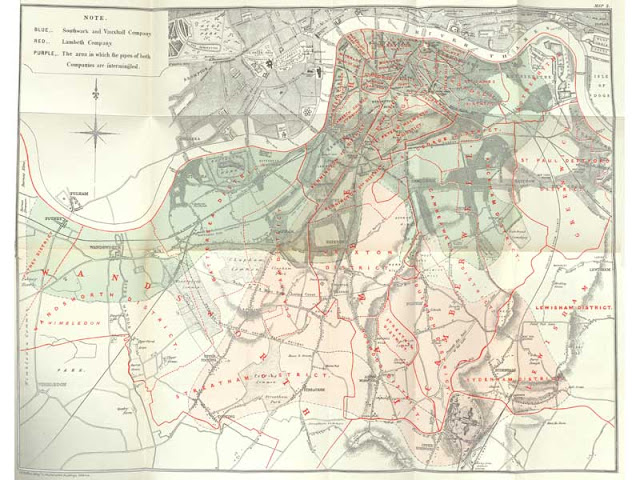 John Snow, ‘Intimate Mixture of the Water Supply of the Lambeth with that of the Southwark and Vauxhall Company, 1854’ from On the Mode of Communication of Cholera, 1855.  LSHTM Library & Archives
“The second edition of Snow's inquiry was greatly expanded to include two maps – incidentally, the only two of his career.  Snow intended this map of the water supply in South London to be the centrepiece of his study – often termed The Grand Experiment.  It involved a mammoth on-foot investigation of 32 sub-districts of South London, supplied by two different water companies drawing water from different parts of the Thames – one polluted with contaminated water.  Snow showed that those residents supplied by the polluted source were several times more likely to contract cholera.  This demonstrated Snow's intuitive understanding of epidemiological principles: the groups exposed and not exposed to the contaminated water were very similar in every other respect, and large numbers were involved.”  From the London School of Hygiene and Tropical Medicine’s Exhibit on Dr. John Snow, on the 200th Anniversary of his birth in 1813.

I am not sure how I missed THIS important milestone, but March 15th, 2013 was the 200th anniversary of the birth of Dr. John Snow (1813-1858), the 19th century London anaesthesiologist who is considered to be the father of epidemiology and has become an iconic figure in public health.  He famously mapped the victims of a cholera epidemic in relationship to the locations of public water sources, and in the process, made the connections between the disease and contaminated water.  Until then, most medical professionals and the general public thought that cholera was caused by breathing unhealthy “miasma,” so rather than dealing with the root problems of a water-borne disease, they were under the mistaken impression that it was spread by air, and focused their attention to dealing with that problem instead of worrying about the water they were drinking. 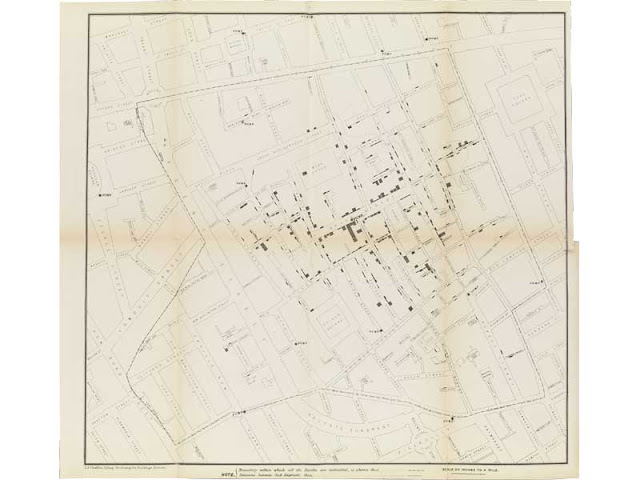 Snow prepared this version of the Broad Street map for a report to go before the Board of Health.  The map shows his original and innovative contribution to the field of disease mapping. The subtle inclusion of a dotted black 'Voronoi' line indicating the equidistant walking points between pumps helped to demonstrate Snow's theory that the Broad Street pump was the origin of the epidemic. 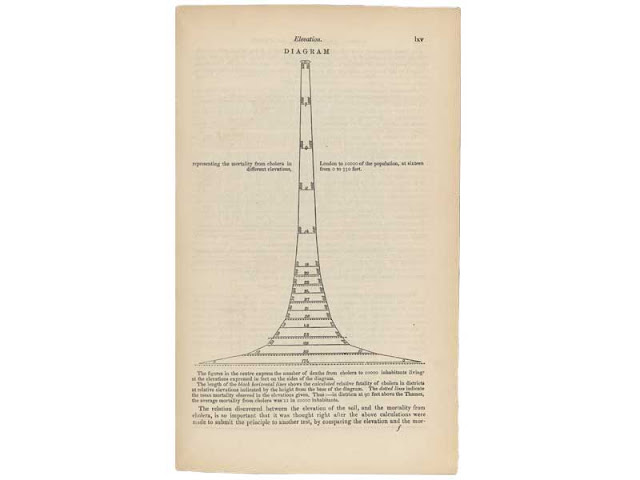 William Farr, “Diagram Representing the Mortality from Cholera in Different Elevations, 1848–1849” from Report on the Mortality of Cholera in England, 1840–50.  Wellcome Library, London.  Farr's Report offers some exceptional visual explanations of cholera mortality data. Contrary to Snow, Farr's analysis was leading him to the conclusion that elevation above sea level was the key factor in the communication of cholera.  Whilst his diagram clearly shows the relationship between lower ground elevation and higher mortality, this association was due to differences in water sources in these locations.  It is a reminder of how visualizations containing false associations have the power to mislead us.
Right now at the London School for Hygiene and Tropical Medicine, an exhibit has been mounted detailing the detective story behind Dr. Snow’s map, and the influence his map has had in the world.  http://johnsnowbicentenary.lshtm.ac.uk/  The hypothesis Dr. Snow was attempting to test involved much more than the mapping exercise, obviously, as important as that map was.  The map was based on a meticulous recording of all the cholera deaths in the Soho neighborhood, and some impressive footwork investigating from where various residences and institutions got their water.  So his analysis wasn’t just based on simple distance proximity, as it was discovered that many of the larger commercial establishments and so forth had their own private water supply, even though they were in close proximity to what turned out to be the culprit public water pump. 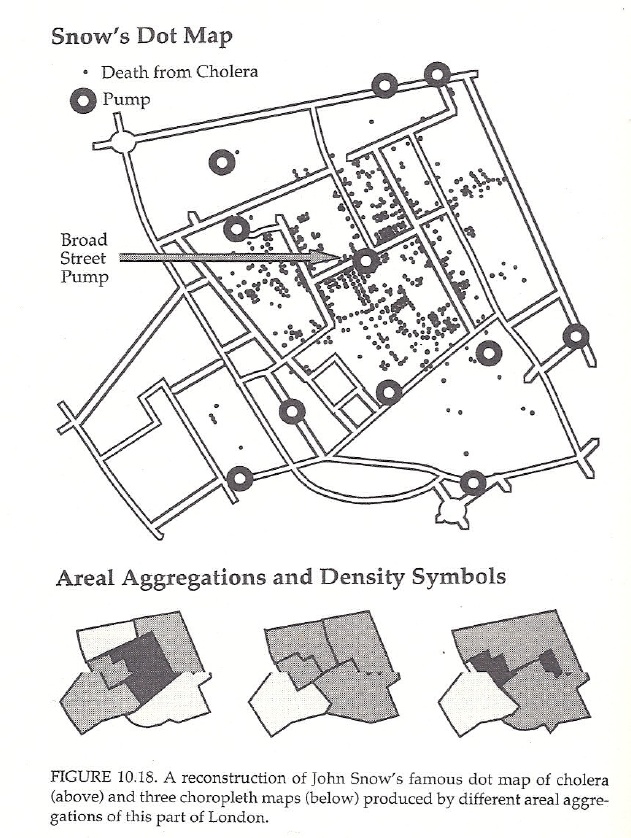 From Mark Monmonier's seminal (1991) book "How to Lie with Maps"

Of course, one of the abiding drawbacks to Dr. Snow’s map was the fact that it is essentially a dot density map, and as has been noted by many cartographers, a dot density map often portrays nothing more than the underlying population density – you can not generally infer any information about the actual rate or proportion of the variable being mapped.  So what looks to be a “hot spot” of the disease or other variable on the map may be nothing more than an indication that there is the underlying concentration of people there, and nothing useful can be gleaned about the variable of interest.  In the case of Soho, however, this was less important than it would ordinarily be, since Soho as a whole was very densely populated, and likely the entire area has a similar enough population density per square mile or per acre.

The exhibit points out that it was a commonly held belief during the social and political unrest prevalent with the outbreak of the cholera epidemic that the disease was a scare tactic dreamt up by the government to keep people in line, or that the disease was invented (or actively disseminated to the poor) by those in power for nefarious purposes, or even that the disease didn’t really exist at all.  There were even popular songs and poems along these conspiracy-theory lines and broadsheets published, including ones such as Cholera Humbug!  The Arrival and Departure of the Cholera Morbus. These broadsheets denigrated public health officials’ efforts to stem and contain the disease, and encouraged popular resistance against the political and medical authorities.  Unfortunately, these same kinds of attitudes still prevail in many parts of the world today, most noticeably pertaining to AIDS and sexually-transmitted diseases.

And for some interesting things about the data itself, see the UK Guardian’s DataBlog post at http://www.guardian.co.uk/news/datablog/2013/mar/15/john-snow-cholera-map
You can download the actual data collected by John Snow and his associates and play around with it, creating new visualizations and aggregations, and see for yourselves how incredible a feat Dr. Snow’s analysis really was, given he accomplished all this by hand and on foot.  No computers, GPS, telephone surveys, or Twitter tweets tracking.
There are a few highly readable books on the cholera mapping story, most notably “Ghost Map: The Story of London’s Most Terrifying Epidemic and how it Changed Science, Cities, and the Modern World,” by Steven Johnson (2007).  Another, more critical, account of this seminal mapping project forms the basis of Tom Koch’s “Cartographies of Disease: Maps, Mapping, and Medicine,” (2005), ESRI Press. 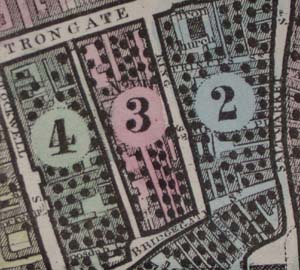 Detail of Dr. Perry’s 1844 map of the fever epidemic in Glasgow.  This shows three of the districts most seriously affected by the epidemic, bordered by Stockwell Street, Bridegate Street, Trongate, and Saltmarket, right near where I used to live!  The dots represent the locations of the fever victims.


John Snow’s map has been called The Map that Changed the World.  Most people (if they know about Dr. Snow at all) believe that his cholera map is the first example of disease data mapping for analytical purposes.  This is not the case, even though his map may be the most well-known and celebrated.  Not to take anything away from Dr. Snow, but a decade or so earlier, in 1844, a Glaswegian surgeon at the Glasgow Royal Infirmary named Dr. Robert Perry, mapped a fever epidemic in Glasgow (detail shown above), and used it to make connections amongst poverty, bad housing, poor sanitation and environmental conditions, and disease.  http://special.lib.gla.ac.uk/exhibns/month/feb2006.html
The exhibit ends with some more recent examples of disease data mapping, showing the important legacy of Dr. Snow’s work, and how maps continue to help us combat disease and understand the relationship between health and environmental and social conditions. 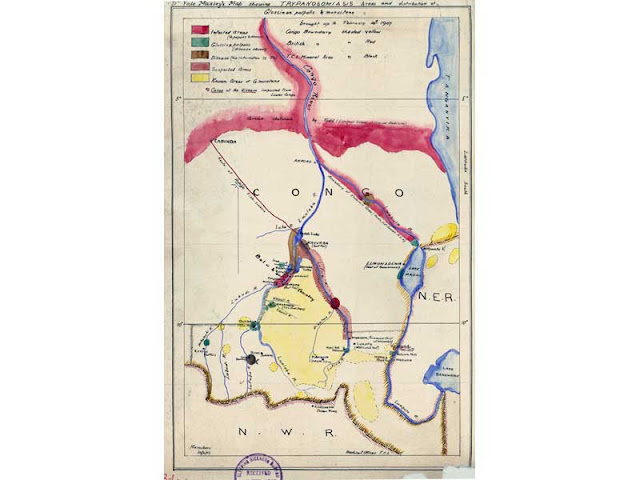 Early public health was arguably more concerned with the protection of British interests overseas rather than serving the well-being of local populations, as evidenced in this map of Sleeping Sickness in the Belgian Congo.  The map was used in Commonwealth Office meetings to highlight how the disease was spreading along the banks of rivers towards areas of British gold mining interest and the need for strategies to stop this. 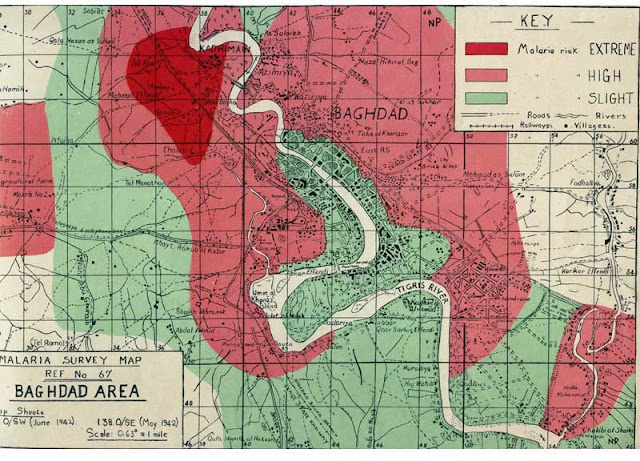 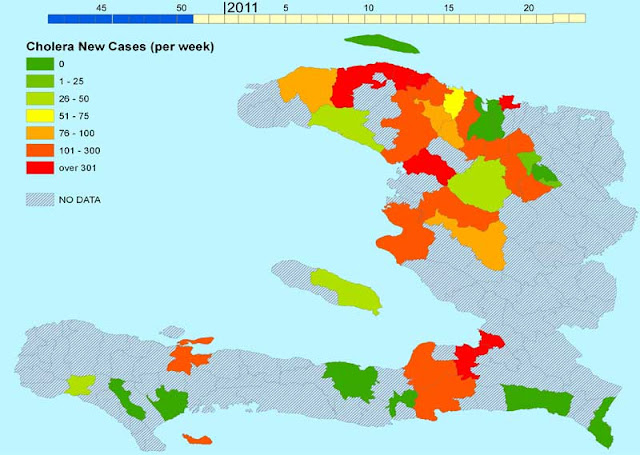 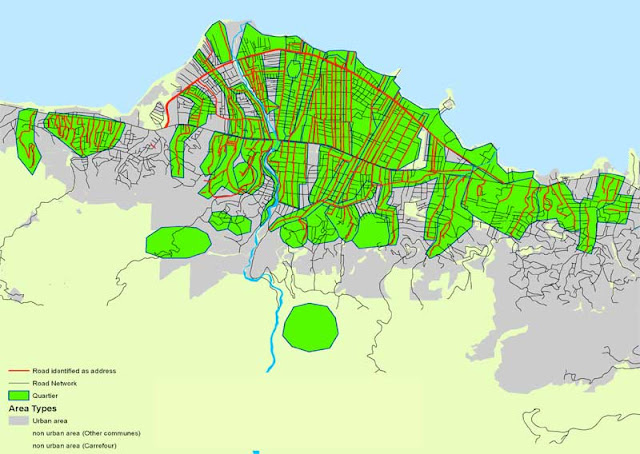 In 2010 after an earthquake had devastated the island of Haiti, the cholera bacillus appeared, perhaps associated with UN soldiers.  It contaminated water sources, resulting in an outbreak that killed over 7,000 people.  Cholera is still prevalent to this day returning after each rainy season.
Ludovic Dupuis, Ivan Gayton and Ruby Siddiqui from Médecins Sans Frontières (MSF) and Chris Grundy from LSHTM mapped and spatially analysed the outbreak in the hope of tracking how the outbreak was spreading.

You can take a virtual tour through the John Snow exhibit at the LSHTM at http://www.johnsnow.org.uk/mobile-map/gallery-map.html

A review “The lie of the land: Mark Monmonier on maps, technology and social change,”
of Mark Monmonier’s books and ideas on mapping, including some words on the Snow map: http://www.academia.edu/215151/Mark_Monmonier_on_maps_and_mapping

Thanks, Rafael Pereira of Urban Demographics, for pointing out the link to Dr. Snow’s birthday.