They will be remembered 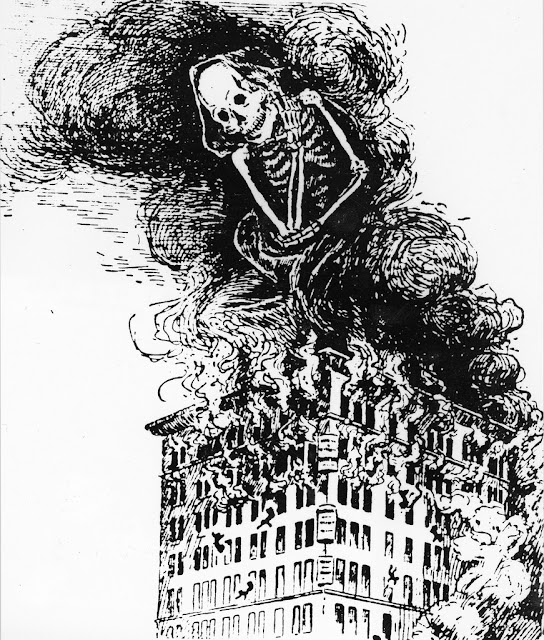 Two years ago today, we commemorated the 100th anniversary of the Triangle Factory Fire, the worst industrial disaster in New York City's history, and one which galvanized ordinary New Yorkers, labor leaders, and policy makers at city, state, and federal levels to make significant changes in labor regulations, ensuring better worker safety and worker rights.  The fire was seen as particularly tragic because most of the dead were young immigrant women, many of them teenagers, and the deaths resulting from the fire could easily have been prevented.
I often wonder, every year when watching the calling of the names of the dead from the 9/11 World Trade Center attacks, waiting to hear the names of my two friends that died in the towers that day, how long this reading of the names is likely to continue, how long will it be relevant to those still alive, who will still be interested, 20 years from now, 50 years, 100 years.  I think we have an answer to these questions with the Triangle Fire commemorations.


Events like 9/11 and the Triangle persist in everyday consciousness because of the sea change (for better or worse) in peoples' lives that they presaged. They will likely be remembered long after the survivors are gone. 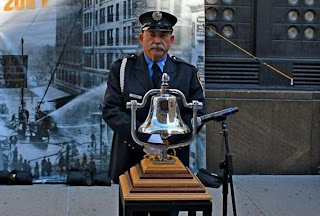 This year, as in the past, the New York City Fire Department rang the bell, once for each of the victims, at the site of the fire.
They also symbolically raised the fire ladders to the 6th floor of the building, which is the highest ladders could go in those days, and thus were several floors short of the fire on the 9th floor.  Many of the dead garment workers jumped from the windows to their deaths, since the factory owners had locked them in, the fire escapes were not built properly and collapsed, and the stairways were blocked. This is a short blurb about the FDNY tolling of the bells: http://www.silive.com/news/index.ssf/2013/03/102_years_later_fdny_remembers.html
http://unionreview.com/102nd-commemoration-triangle-shirtwaist-factory-fire 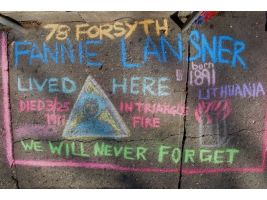 And this year, as in the past, ordinary people are involved in the "chalking" project, chalking the names of the victims in front of the tenements where they were living at the time of their deaths, many of them on the Lower East Side.  This ephemeral public art project is open access, anyone can join and participate in the chalking.  http://streetpictures.org/chalk/
http://www.boweryboogie.com/2013/03/neighborhood-chalkings-commemorate-anniversary-of-triangle-shirtwaist-fire/
There is what promises to be an interesting talk by Kevin Baker at the Tenement Museum on Wednesday, March 27th, 2013,  about the Triangle Fire.  Kevin Baker, as some of you know who are avid historical fiction readers or NYC history buffs, authored a number of fabulous and award-winning books about Ole New York, such as Dreamland (turn-of-the-century Coney Island), Paradise Alley (the NYC Draft Riots/race riots during Civil War period), and Striver's Row (a young Malcolm X in WWII-era Harlem).
http://www.tenement.org/tenement_talks_details.php?id=772
Also, if you haven't seen them already, check out my blog posts about the Fire and the Chalking Project.
http://geographer-at-large.blogspot.com/2011/02/100-years-later-triangle-shirtwaist.html
http://geographer-at-large.blogspot.com/2011/03/remember-triangle.html
Calling artists, designers, and architects: There is also a competition, sponsored by Remember the Triangle, for a design for a permanent memorial at the site of the fire.  You must register by March 29, 2013 on their website. Submission of design entries is in April.  http://rememberthetrianglefire.org/competition//about.html
Interactive map of important places related to the Triangle Fire.
http://www.pbs.org/wgbh/americanexperience/features/map-widget/triangle/