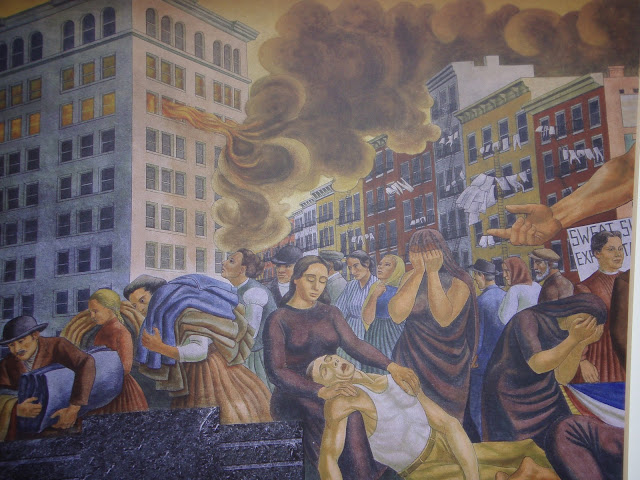 Detail from the mural “Victory of Light over Darkness,” by Ernest Fiene, 1944, depicting a scene from the Triangle Shirtwaist fire, March 25, 1911.  From the exhibit Art ~ Memory ~ Place: Commemorating the Triangle Shirtwaist Factory Fire.   See below for more details on the mural.
Today is the 100th Anniversary of the Triangle Factory Fire in Lower Manhattan, where workers lost their lives due to faulty and non-existent safety provisions and terrible working conditions.  The fire served to wake people up from their fantasy of the then-commonly-held notion that unbridled and unregulated capitalism would raise all boats, and be good for the workers as well as business owners.  The horrific fire resulted in important and far-reaching regulatory changes protecting workers in many trades other than just needlecrafts.
Yesterday I visited New York University’s Grey Galleries to see an exhibit on the tragedy and its aftermath.  NYU currently owns the building where the fire took place, and it is now used for Biology and Chemistry teaching labs and classrooms.  Although these types of loft buildings were heralded at the time as the latest in modern worker environments - vast improvements over the then-typical sweat shop conditions in crowded tenement buildings of the Lower East Side - they were still far from having a high standard of occupational, health, and environmental protection.
Here are some photos from the exhibit.  For more details about the fire, please see my previous post from February 26th, at http://geographer-at-large.blogspot.com/2011/02/100-years-later-triangle-shirtwaist.html
Further detail of Victory of Light Over Darkness, above.
“Photodocumentation of the mural by Ernest Fiene 'History of the Needlecraft Industry,' Central High School of Needle Trades, (now High School of Fashion Industries), New York, 1938-1944.
Detail from 'Victory of Light over Darkness'
In the late 1930’s, the Needlecraft Education Commission, which had close ties to the ILGWU [International Ladies Garment Workers Union], commissioned Ernest Fiene – who had emigrated to the U.S. from Germany in 1912 at the age of 18 – to paint murals in the auditorium of the new Central High School of Needle Trades.  The first panel, 'Victory of Light over Darkness,’ culminated in this scene of the Triangle fire.  Although the vast majority of Triangle victims were young women, the fallen worker seen here, cradled by a female figure, is male.  The image evokes the Lamentation, which shows the dead Christ mourned by the Virgin Mary.  Standing at the right is Lillian Wald, founder of the Henry Street Settlement.  While Fiene’s mural was privately commissioned, it resembles – in is subject, style, male muscularity, and left-leaning politics – the government-sponsored WPA murals that he also painted.” (Text from the exhibit Art ~  Memory ~ Place) 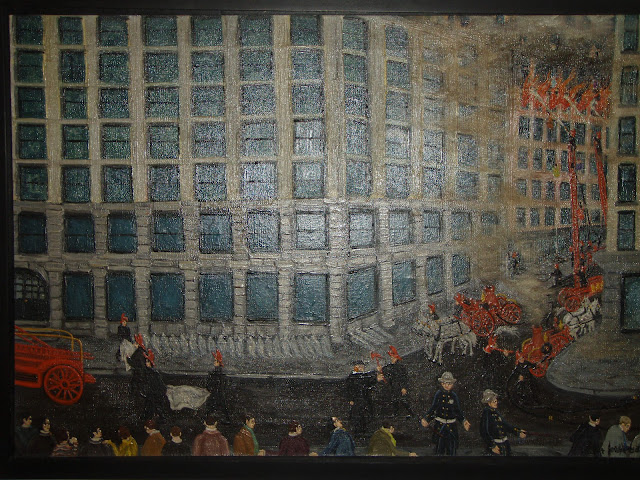 “Victor Joseph Gatto
Triangle Fire, March 25, 1911 (ca. 1944)
Oil on canvas
Museum of the City of New York
At the age of 18, Victor Gatto witnessed the Triangle fire from nearby Washington Square.  Three decades after, he produced this vivid painting, its bright colors in stark contrast to the black-and-white photographs from the time of the fire.  At the bottom, policemen restrain spectators while smoke and flames shoot out from the building’s windows, and firefighters with their pump engines direct water at the blaze.  Near the fire ladders, workers fall through the air; on the sidewalk in from of NYU’s Main Building (now home to the Grey Art Gallery) is a neatly arranged row of shrouded bodies.
A little-known artist from an Italian immigrant family, Victor Gatto worked as a steamfitter, plumber, and featherweight boxer before turning to painting in his forties.  He claimed that his new career was inspired by seeing the prices charged at an outdoor art exhibit in Washington Square.  As a member of the working class, Gatto likely identified with the fire’s victims and intended this painting as both memorial and cautionary tale.”  (Text from the exhibit Art ~ Memory ~ Place) 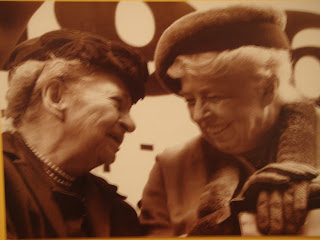 “Former Secretary of Labor Frances Perkins and Eleanor Roosevelt at the 50th Anniversary commemoration at the site of the Triangle fire, March 25, 1961.
Photograph
International Ladies Garment Workers Union Archives, Kheel Center, Cornell University
Just before the tragedy’s 50th anniversary, Leon Stein, editor of Justice, the ILGWU’s publication, began organizing a commemorative ceremony at the site of the fire. In conjunction with David Dubinsky, Stein planned an event in which elected officials, union representatives and supporters, New York University staff, and survivors and their families would come together in recognition of the fire’s significance.  During the ceremony, Dubinsky relayed a message of protest against the Albert-Folmer bill, which would have weakened enforcement of New York States fire protection legislation;  Frances Perkins gave an eyewitness account of the fires as seen from the street below; and Eleanor Roosevelt emphasized the need for vigilance on labor issues.”  (Text from the exhibit Art ~ Memory ~ Place)  [In 1911, Frances Perkins was a very young Columbia University graduate student who happened to be in Washington Square the day of the fire.  She was the first ever female cabinet member for a U.S. President.  FDR's choice of Frances as Secretary of Labor was probably partially due to her excellent service on the NYS Factory Investigating Commission that investigated worker safety problems after the Triangle fire, and promulgated 30 sets of new regulations.  As Secretary of Labor for 12 years under FDR, she was largely responsible for the U.S. adoption of social security, unemployment insurance, federal laws regulating child labor, and adoption of the federal minimum wage and overtime laws.  Frances Perkins called the day of the Triangle Shirtwaist fire “the day the New Deal began.” ] 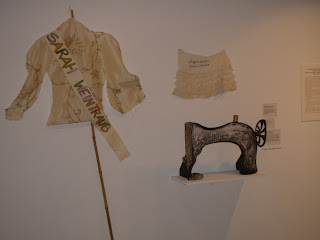 Current art works commemorating the Triangle fire and the workers.  (from the exhibit Art ~ Memory ~ Place) 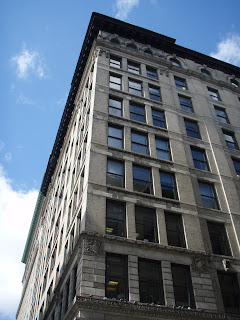 NYU’s Brown Building, formerly the Asch Building, where the Triangle Shirtwaist Company occupied the 8th, 9th, and 10th floors.  When I took this photo, the barricades were already up along Washington Place and Greene Street in anticipation of the 20,000 people expected to attend the March 25 commemorative events and solemnities, which are set to culminate in a lecture in the historic Great Hall of the Cooper Union for the Advancement of Science And Art.  The Great Hall is where Abraham Lincoln, Frederick Douglas, Mark Twain, Salman Rushdie, Norman Mailer, Barak Obama, Ulysses Grant, and many other luminaries of politics, science, and letters, have addressed New Yorkers in public forums for over 150 years.  As well, the Great Hall has been the scene of many public debates and rallies on worker's rights campaigns, voting rights for black men after the Civil War, the birth of the NAACP, women's sufferage movement, and the creation of the American Red Cross, to name but a few of the seminal happenings at the Great Hall since 1858). 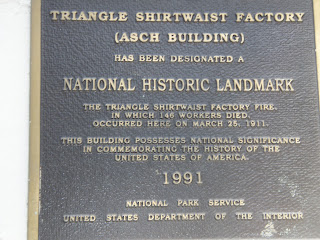 The National Historic Landmark plaque, from 1991, on the occasion of the 80th anniversary of the fire.
All photos taken by the Map Monkey on a beautiful but cold NYC spring day, March 24, 2011.
Posted by Map Monkey at 8:24 AM