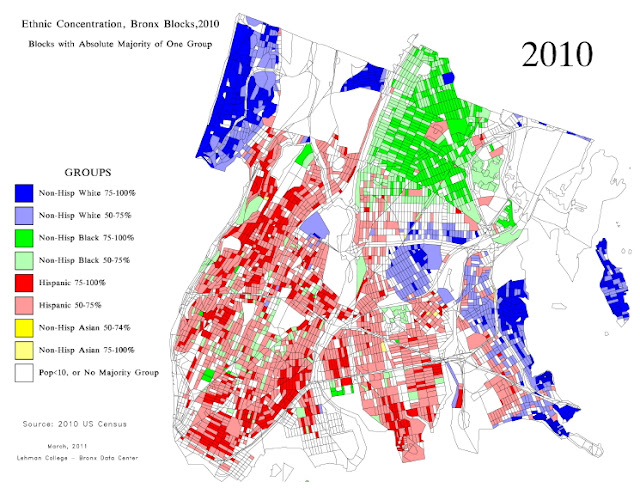 Bronx Ethnic Concentration by Block, 2010.  No big surprise, the Bronx is as diverse and as segregated as ever.  Map by Bill Bosworth, Bronx Data Center.
The 2010 Census
The new Census data is out now for New York State, at least the basic stuff.  It has the counts of Hispanics, Whites, Blacks, Asians, population over 18, vacant housing – all the necessary variables for delineating the new Congressional Districts for voting (the contentious redistricting process), which is, after all, the main purpose of the Census, despite how we geographers and other researchers have found myriad other uses for it!  This basic Census data is mandated by law to be available by April 1st of this year for all the states, and at some point after that the rest of the data will be released as it becomes ready.
Bill Bosworth, Professor Emeritus and Director of the Bronx Data Center, has, as always, gotten the jump on the rest of us with the new Census data.  He has not only gotten the 2010 data into his computer, but has produced maps and comparative analyses with it already.
Prof. Bosworth has a very interesting technique for mapping multiple variables at once.  For instance, for the map of Ethnic Concentrations above, he maps each block according to its majority population.  This yields a quite complete snapshot of overall distribution of racial and ethnic groups and allows one to view the data without confusion on one map, as opposed to mapping percentages of each racial/ethnic group separately.  This only works well, of course, because the Bronx is highly segregated, and most of its blocks are a majority of one population group or another.  In an area with more mixture, it is likely that no one group would dominate a block.  In the Bronx, most of the blocks are dominated by one group, as you can see in the map above.
Comparing the 2000 and 2010 maps of blocks having an absolute majority of one ethnic/racial group, it seems that the Bronx is even more polarized now than it was 10 years ago, with more blocks having a 75-100% majority of one group, and fewer pockets of other groups interspersed in areas dominated by a different group.  This is especially true of the areas with majority Hispanic population.  These areas now contain a lower percentage of non-Hispanics than in 2000.  In the non-Hispanic Black majority areas, the reverse is true, and these areas seem to have become less Black and more mixed.  In the non-Hispanic White areas, some are now more mixed, and some now have an even higher percentage of White population.
However, these maps are dealing in percentages only, per block, and don’t reflect the absolute total numbers of the various sub-populations in the Bronx.  Overall, according to Prof. Bosworth’s calculations based on the new Census, the non-Hispanic White population is now a little less than 11% of the total Bronx population, down from more than 14% in 2000.  In general, both the non-Hispanic Black and non-Hispanic White groups lost population in the Bronx since the 2000 Census.  The Hispanic population has grown by some 5 or 6 %, and total population in terms of absolute numbers is up for the Bronx overall (about 4% increase over 2000).
Unique Features of the Bronx:
Some interesting and unique features of the Bronx, from the Bronx Data Center’s website:
In 2000, 48.4% of The Bronx population was Hispanic.  By 2009, the Census Bureau Population Estimates put the figure at 52%. [The 2010 Census puts the Hispanic population at 53.5%.]  In the eastern half of the United States, only Miami-Dade County, Florida has a higher proportion of Hispanics.  All the other counties with higher Hispanic rates are in the southwest, mostly along the Mexican border. 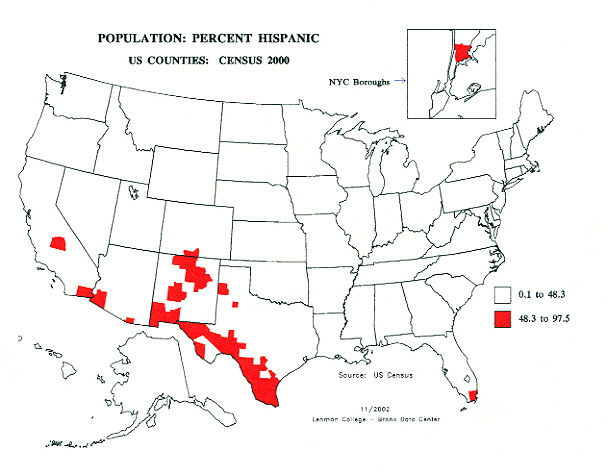 Over 30% of The Bronx population refused to identify themselves with "traditional" racial categories in the 2000 census.  Instead of the traditional categories, people identify themselves either as "some other race," or as "multiracial."  This figure rose to 36.3% in 2004, and to 39.8% by 2007.  In the 2004 data for all counties, no other county exceeded 30% in the eastern half of the U.S. 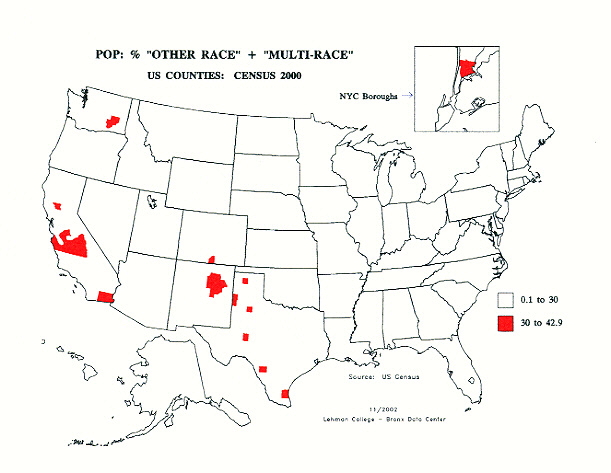 In 2000, only 14.5% of the Bronx population identified themselves as "Non-Hispanic White."  The 2009 Census Bureau estimate is 12.4%.  [The 2010 Census states it as 10.9%.]  In the eastern half of the U.S., only three counties have a smaller percentage of non-Hispanic Whites: the Menominee Indian reservation in Wisconsin, and two overwhelmingly Black counties: Jefferson in Mississippi, and Macon in Alabama. 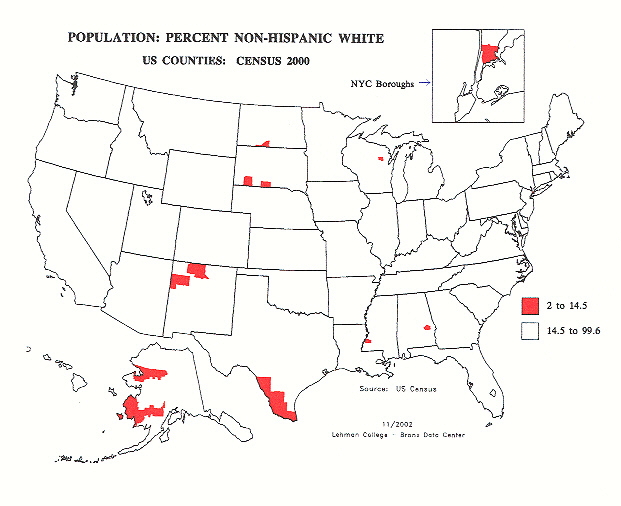 In 2000, the Bronx was one of five counties in the U.S. where over 30% of households consisted of families headed by single women (2007: 30.0%).  Three of the five are Indian reservations in South Dakota; the fourth is Holmes County, Mississippi. 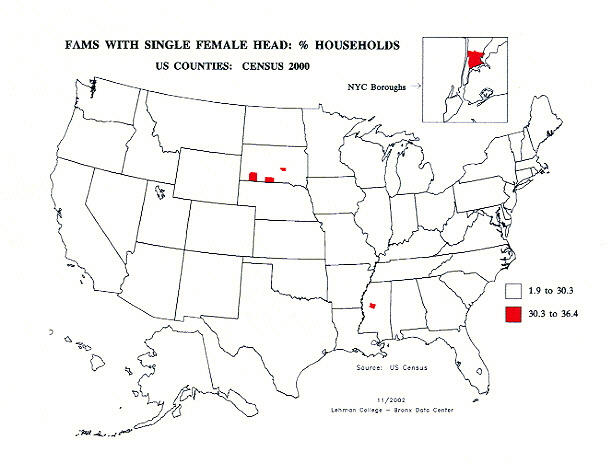 There’s lots more on the website, so check it out!  If you don’t know much about the Census, Prof. Bosworth’s webpage is a great primer on the topic.
http://www.lehman.edu/deannss/bronxdatactr/discover/bxtext.htm
The Nation’s Mean Center of Population
On the Census website itself is a cool map animation of how the Mean Center of Population of the U.S. has moved since the first Census in 1790.  It has pretty much moved steadily west and a little bit south each decade from the beginning.  The Census Bureau estimates that the current (2010) Mean Center of Population is Plato, Missouri.  “The center is determined as the place where an imaginary, flat, weightless and rigid map of the United States would balance perfectly if all residents were of identical weight…..Historically, the center of population has followed a trail that reflects the sweep of the nation's brush stroke across America's population canvas.  The sweep reflects the settling of the frontier, waves of immigration and the migration west and south.  Since 1790, the location has moved in a westerly, then a more southerly pattern.  In 2000, the new center of population was more than 1,000 miles from the first center in 1790, which was near Chestertown, Md.” (U.S. Bureau of the Census website).  http://www.census.gov/geo/www/cenpop/MeanCenter.html 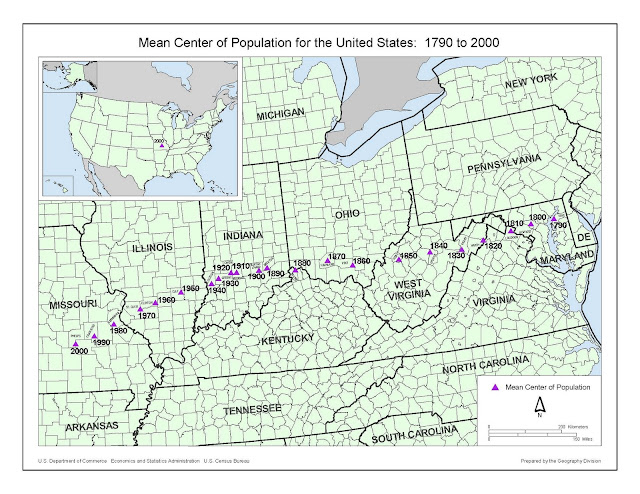