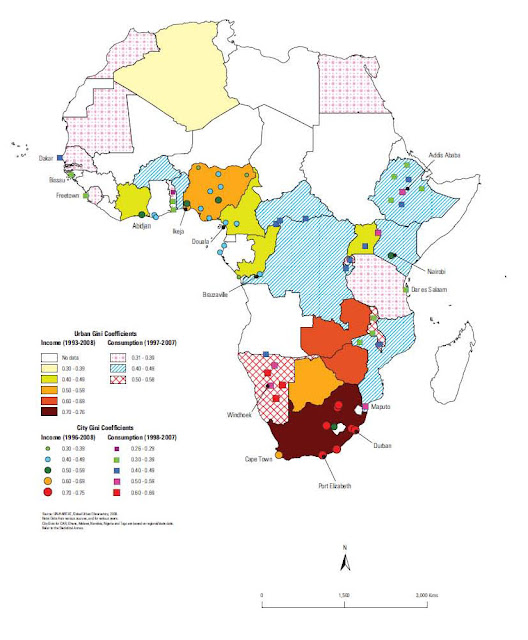 Diagram from Southern African Regional Poverty Network http://www.sarpn.org.za/documents/d0000990/
“Graphically, the Gini coefficient can be easily represented by the area between the Lorenz curve and the line of equality. On the figure to the left, the Lorenz curve maps the cumulative income share on the horizontal axis against the distribution of the population [households] on the vertical axis. In this example, 70 percent of the total income is obtained by around 20 percent of the population [or households, in this example].  If each individual had the same income, or total equality, the income distribution curve would be the straight line in the graph – the line of total equality.  The Gini coefficient is calculated as the area A [between the curve and the line of equality] divided by the sum of areas A and B [everything under the line of equality].  If income is distributed completely equally, then the Lorenz curve and the line of total equality are merged and the Gini coefficient is zero.  If one individual receives all the income, the Lorenz curve would pass through the points (0,0), (100,0) and (100,100), and the surfaces A and B would be similar, leading to a value of one for the Gini-coefficient.”  From the Poverty Reduction and Equity website of the World Bank http://web.worldbank.org/WBSITE/EXTERNAL/TOPICS/EXTPOVERTY/EXTPA/0,,contentMDK:20238991~menuPK:492138~pagePK:148956~piPK:216618~theSitePK:430367,00.html
In a nutshell, then, the Lorenz Curve is established by plotting the cumulative percentage of income earned by the cumulative percentage of the population along two axes.  The Gini coefficient is then derived by creating a ratio of the area between the Lorenz Curve and the line of equality, divided by the total area under the 45 degree angle line that represents complete equality.  The lower the Gini coefficient, the more equality of income.

Because of the disparate ways that different countries calculate poverty and collect information on income, the Gini Index takes into account either or both “income” as earnings, and also by estimating “consumption,” or actual expenditures, as a proxy for income.  You will often see both used within the same map, depending on how the individual countries collected the data. 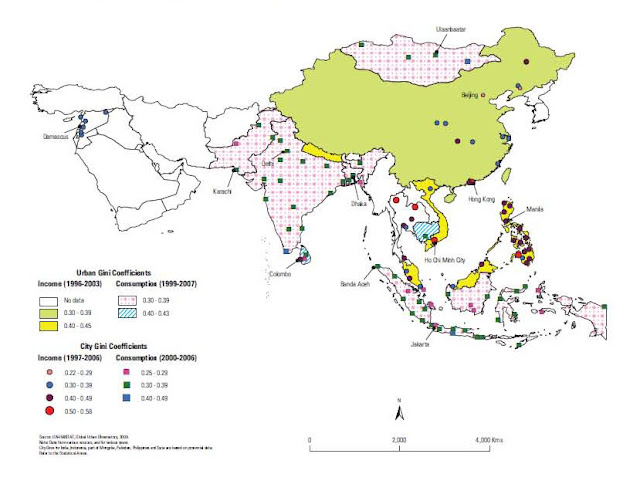 Asia – relatively low Gini coefficient (0.38) in urban areas.
From: UN-Habitat “State of the World's Cities 2010/2011 - Cities for All: Bridging the Urban Divide”
So, what are some of the impacts of income inequality in urban areas?  In addition to indicating simply economic disparities, a high Gini index represents barriers to cultural, political, social, environmental, and health equality.  These forms of exclusion continue to marginalize huge swaths of the population.  This marginalization is social as well as physical and translates into spatial inequalities and deeply divided cities.  Since virtually all of the world’s population growth in the coming decades will take place in cities, it is crucial to make cities more inclusive.  In general, countries with the highest per capita income are the most urbanized, and conversely, those with the lowest incomes tend to be the least urbanized.  So, overall, the process of urbanization should be seen as (and has been) overall an effective means of poverty reduction, and urban living has the potential to (and usually does) offer much more opportunity to people.
Some areas have made progress in reducing the number of people living in slums.  In Northern Africa, for instance, both the proportion and absolute numbers of slum dwellers fell significantly, as it has in China as well.  What constitutes a “slum”?  According to the UN, a slum is defined as a part of the city where the residents do not have durable (permanent) housing, little or no acceptable water or sanitary infrastructure, severe overcrowding (more than 3 people to a room), and no secure tenure and protection against forced eviction.  By this definition, many cities are “slum cities,” with the majority of their residents living in slum conditions, which in Bangladesh includes 70 percent of urban dwellers; in Yemen, 65 percent; in Haiti, 76 percent; and in Bolivia, 61 percent.  Women bear the brunt of slum living, being more often the water bearers and waste disposers, spending more time within the slum than men, and thus being more exposed to the slum’s environmental burdens as well as the higher rates of crime and violence.
This spatial inequality, the segmentation and marginalization of people and geography, the uneven distribution of amenities and disamenities, and fragmentation of opportunities, generate high social and economic costs for the poor as well as society as a whole.  Unequal income distribution can lead to social unrest and political instability, more than overall high poverty levels alone would produce.  The spatial “poverty trap” of income inequality stems from the physical and social distance between rich and poor neighborhoods, with concomitant adverse impacts: restrictions for the poor on job opportunities, gender disparities, deteriorated living conditions, social exclusion, and high crime rates.  The poor can not participate to the fullest degree in the “urban advantage.”  Considering that by 2050, nearly three quarters of the world’s population will be urban, and in the extreme example of South America, it is estimated that over 90% of its population will be urban by 2050, the fact that many of the world’s cities have such extremes of wealth and poverty does not bode well for our collective welfare.
There are a number of drawbacks to using the Gini coefficient as a measure of inequality.  As with any global index, it is an imperfect and imprecise measure for a complicated concept, and many factors are overlooked in its calculation, such as non-monetary economies, bartering, subsistence farming, welfare benefits from the state, governmental subsidies and services, and it measures income rather than wealth.  Income disparities also do not necessarily capture standard of living differences.  For instance, In Brasilia, there is a high Gini coefficient of 0.60, but nearly 95% of the population has piped in water and sewage provisions, indicating a higher quality of life for most of the population than might be assumed from a high Gini coefficient.  Most importantly, the Gini coefficient can not be used to measure poverty, per se, but merely income inequality.  Countries can be overall wealthy or overall poor, and therefore each have very low Gini coefficients, because they are homogeneous in terms of income.  That doesn’t mean, of course, that the two countries have similar standards of living, or poverty rates.  It just means that everyone in that country or city is approximately equally poor or equally wealthy.  The Gini coefficient is perhaps most useful when used in conjunction with other indices, such as the Human Development Index, and the GDP (Gross Domestic Product) of a nation.  Unfortunately, these are calculated at the national level, and can not usually be disaggregated to the municipal level to be compared with the urban Gini coefficients. 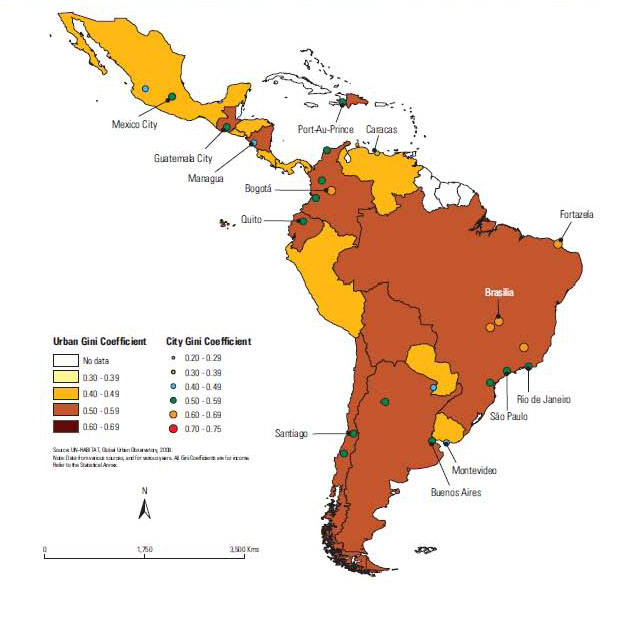 Urban Gini Coefficient in Mexico, the Caribbean, and Central and South Americas,
From: UN-Habitat “State of the World's Cities 2010/2011 - Cities for All: Bridging the Urban Divide”
See these weblinks for further information on poverty mapping and urban income inequalities: 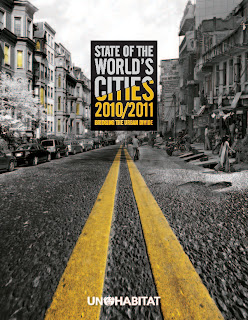 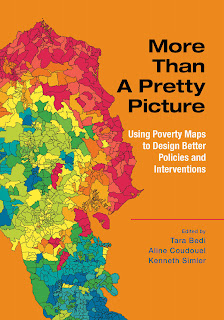 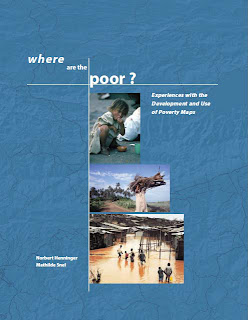 “Where are the Poor? Experiences with Development and Use of Poverty Maps,” 2002, World Resources Institute (Free download of pdf book.)
http://pdf.wri.org/wherepoor.pdf 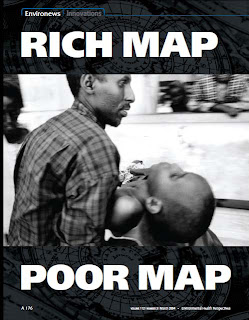