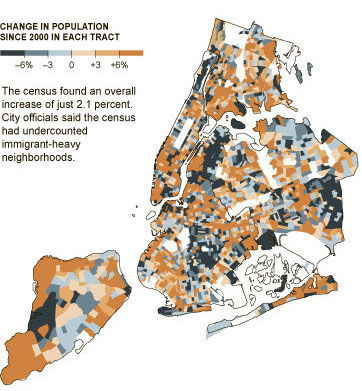 Here's an article in The New York Times about New York City's presumed "undercount." The Census Bureau had originally estimated an increase in the past decade of 400,000 in NYC's population, (which would have represented a 5% increase over Census 2000 population counts) but the actual Census survey showed an increase of only 167,000, which equals about a 2% increase over the Census 2000 population count.  The mayor and Borough Presidents are crying "Foul," and it is not just because they are trying to protect NYC's reputation as a powerhouse of growth and innovation: many Federal $$ programs are dispensed to locations based on population counts.  NYC will lose out if the current numbers stand.
http://www.nytimes.com/2011/03/31/nyregion/31nycensus.html?nl=todaysheadlines&emc=tha29

But this overall increase of 2% masks many important local differences (as usual!).  If you think your part of the city is now more crowded than in the recent past, you may be right - population in some parts of the city DID increase significantly, balanced out by other parts of the city that lost population.  See maps from The NY Times, above and below.  Of course, compared to many cities, NYC is not doing too badly in the "keeping them here" department - Detroit, by comparison, lost fully 25% of its population in the past 10 years.

From The NY Times - Interactive 2010 Census Mapping
Browse population growth and decline throughout the U.S., changes in racial and ethnic concentrations and patterns of housing development (by county).
http://projects.nytimes.com/census/2010/map?ref=nyregion 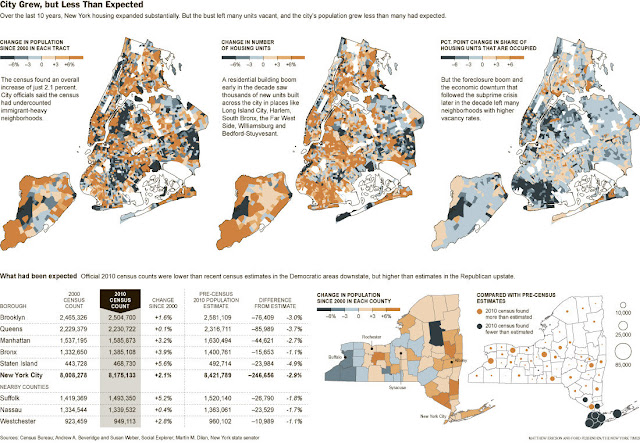