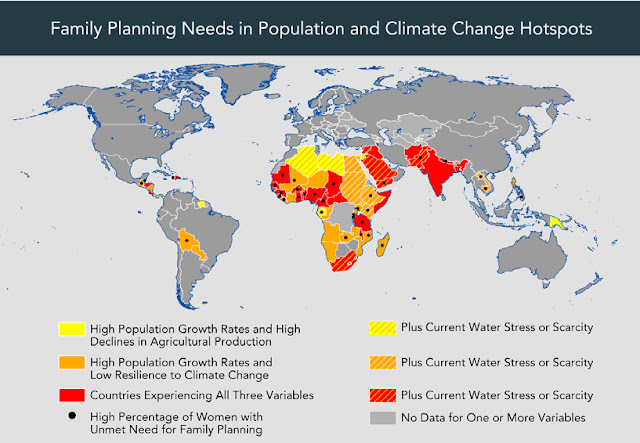 This map shows areas at the intersection of high population growth rates, declines in agricultural production, high water stress or scarcity, low resilience to climate change, and lack of available reproductive planning.  Source: Population Action International (Healthy Families Healthy Planet)
Continuing with the global perspective, the Population Action International (Healthy Families Healthy Planet) website has some nice interactive maps that show how the relationships amongst climate change impacts, demographic trends, and reproductive health needs are likely to affect countries’ abilities to adapt to climate change.  (Thanks, Elia Machado, for sending the link.) http://www.populationaction.org/Publications/Interactive_Databases/climate_map.shtml
So much is unknown about climate change - there are numerous predictive models used to estimate the magnitude of sea level rise and other likely climate change-related phenomena, but the predictions vary considerably in extent and severity.  However, we know that adverse health impacts resulting from climate change have the potential to be dire in many parts of the world, and will likely affect almost every place to some degree.  Climate change will be coupled with rapid population growth rates in some places, reduced agricultural yields due to drought, water shortages and water stress, and the inability of less developed countries to mitigate these effects through increased resources.  In some places, all these negative factors will converge at once, and these places tend to be areas already at risk.  People in poorer areas are generally more vulnerable to natural disasters, such as hurricanes, flooding, landslides, and other extreme weather-related events, which are likely to increase in both number of events and severity, with global climate change.  These populations have fewer personal resources; less support from their governments for disaster preparedness, planning and management, evacuation, mitigation, and recovery; less community support infrastructure; and are therefore less resilient to recover from the impacts of climate change.  Climate change is therefore an environmental justice issue - actually, it will probably become the grand-daddy of all environmental justice issues in terms of impacts and numbers of people affected.
Possible health impacts from climate change include:
a.) cardiovascular and respiratory disease from increase in air pollution;
b.) vulnerability to kidney failure and heat stroke from extreme heat events;
c.) proliferation of vector-borne diseases (e.g., malaria, West Nile virus, Dengue fever, Lyme disease, encephalitis) from increases in the extent of vector habitat due to warming trends;
d.) water-borne diseases (e.g., cholera, cryptosporidium, giardia, E. coli infection, dysentery, typhoid) from increased flooding and resultant contamination of water, as well as from water stress and scarcity;
e.) health impacts due to salt intrusion into groundwater from sea level rise;
f.) increased vulnerability amongst the disabled, elderly, immune-compromised, and those with other serious health conditions from floods and other climate change-related hazards.
g.) reduction in agricultural productivity, food security, and subsequent increase in famine, malnutrition, and food- and diet-related illnesses.
All of these impacts are exacerbated by rapid population growth rates and failing environmental infrastructure.

Age Structure/Population Pyramids
Shape of things to come – another nice interactive feature, click on country and get time-line of population pyramids. http://www.populationaction.org/Publications/Reports/The_Shape_of_Things_to_Come_Interactive_Database/Index.shtml 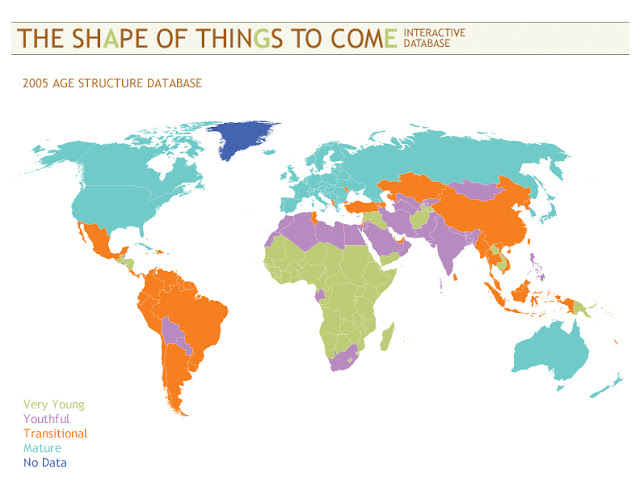 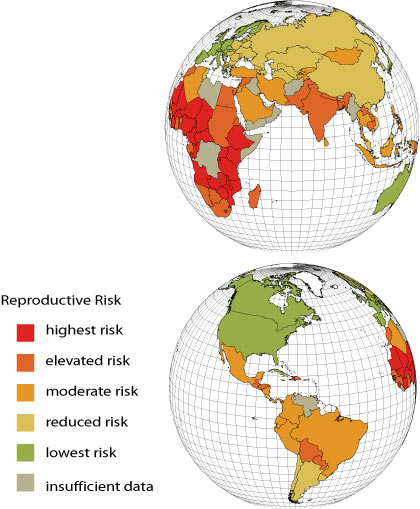 Narrowing the gender gap
“Improving the status of women is critical to achieving sustainable development. The ICPD Programme of Action advocates programmes and policies that increase women’s participation in government, promote education for girls, and increase employment opportunities for women, among other actions.”
Meeting health needs
“Promoting women’s health and safe motherhood is a key objective of the ICPD Programme of Action—and increasing women’s access to safe, affordable and effective reproductive health care and services is critical. These include family planning information and contraceptives, skilled care at childbirth, safe abortion services in countries where abortion is legal, and HIV/STI prevention, treatment and management.”  Source:  International Conference on Population and Development (ICPD)  http://www.populationaction.org/cd2015/reportCard/index.php
Human Planet: The most remarkable species of all, living in the wildest places on earth
Now, if you would like to see something totally uplifting, check out this short video from the BBC – it contains amazing photography of our planet (much of it taken from above) and the wildly varying habitats in which our species lives.  Soaring and achingly beautiful - even though most of us don’t live in any of these wild places anymore.  It makes you want to root for the humans!  (Thanks, Bobbie Menendez, for sending this.)  http://www.youtube.com/watch_popup?v=2HiUMlOz4UQ&vq=large