Migration Patterns of Americans – Where they are moving? 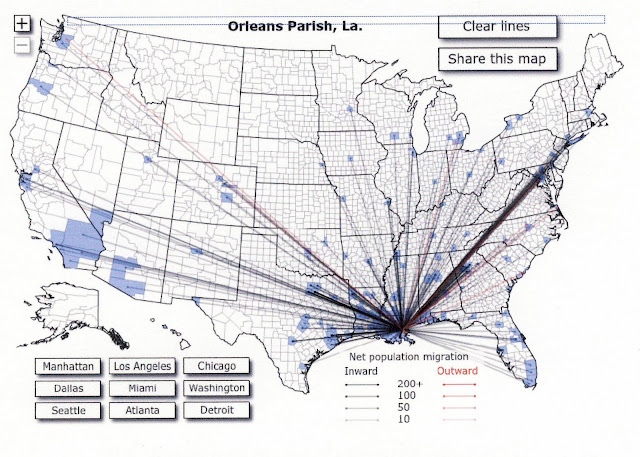 More than 10 million Americans moved from one county to another during 2008.  That’s about 3% of the whole U.S. population just packing up and gone in 12 months.  Black lines indicate net inward movement, red lines net outward movement.  This map shows Orleans Parish, Louisiana, a county whose boundaries are coterminous with the city of New Orleans.  Surprisingly, lots of people moving to New Orleans.  Map by Jon Brunner in Forbes.
A good interactive map in Forbes.  Zooming into the map is helpful, you see more detail, and it’s especially good for counties with a mainly local migration pattern.   For the major cities, where people are likely to be moving clear across the country, the whole map is necessary, and it then becomes more difficult to ferret out the nuances of the red and black lines.  But overall it gives a nice snapshot of where people are moving.  It’s hard to believe there is so much long-distance moving going on!
It seems that every county that I click on has WAY more red lines than black!  Where are they all going to?  Except Manhattan, of course, which has more black lines (in-coming) than red (out-going) – but just barely more; same with Atlanta (more black than red), and Washington, DC (about half coming and half going! Gives new meaning to the expression “They don’t know whether they’re coming or going!”).  But seriously, comparing Manhattan (New York County) to the Bronx, for instance, is just sad.  Most counties of the NY metro area have more red lines – people leaving.  And in my “home” county in NJ, everyone is moving to Florida, it seems!  Los Angeles, Chicago, Miami, a predominance of red lines; Detroit, practically ALL red.  But everyone is still moving to Seattle, apparently!  Very interesting.
Some of the readers’ comments on the Forbes site are worth reading:  every one is a map critic these days, it would appear!  A few of them actually make helpful suggestions about line weights, colors, line patterns, and providing pop-up boxes with the raw counts of ins and outs by county, to better communicate the information both visually and quantitatively.  Other peoples’ comments are just annoying, and it’s clear they never worked with actual datasets before: “Why can’t the data be more up-to-date than 2008?  You should update it!”  “It would have been better if you showed where the jobs were, too.”   Oh, well, you can’t please everyone!  And if there is one thing I’ve learned in life, it is ESPECIALLY hard to please idiots!
http://www.forbes.com/2010/06/04/migration-moving-wealthy-interactive-counties-map.html
Thanks for sending the link, Andrew!
Posted by Map Monkey at 8:33 AM