John Randel’s Map, as surveyed for the New York City Commissioners.
Tomorrow (March 22) is the 200th anniversary of the adoption of the 1811 Commissioners Plan for New York City.  Prior to the Commissioner’s grid plan, the city’s streets had been laid out rather willy-nilly, as befitting a city that was founded in essentially late mediaeval times by northern Europeans (who were not big fans of the grid, as were some of the Roman-derived cultures).  The old Dutch part of the city (the current downtown financial center) was an organic mélange of twisting narrow lanes, the street pattern still preserved in places like Stone, Beaver, Bridge, and Pearl Streets.  Many parts of the city that were settled later, like Greenwich Village and the old Lower East Side (not the East Village, but the area below Houston Street, between the Bowery and the East River) had their own independent street layouts, relatively unconnected with the other settlements in Manhattan.  There were even some early proto-grids around Delancey’s farm (now the Lower East Side), and other former farmsteads.  But what there wasn’t was a unifying overall street grid.  This is what the Commissioners hoped to accomplish with their new plan. 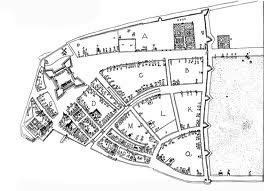 Castello Plan (1660) of Dutch New York (Nieuw Amsterdam), showing lower Manhattan (north at right) with a fortified Wall Street at the northern boundary, and a star-shaped fort at the southern boundary. The southern tip of Manhattan is now much larger due to landfilling activities, which started with the Dutch in the 1600's.


You must understand that this was a very bold move on their part – in 1807, when the mappng work began, much of Manhattan was still uninhabited or sparsely inhabited, and was all hills and dales, especially in the northern reaches of Manhattan.  It undoubtedly seemed like a touch of madness to most New Yorkers at that time to plat such wild terrain.  As if anyone would ever live that far from Wall Street!
The purpose of the grid was to make the real estate development of the city more predictable and profitable, basically creating thousands of property lots of consistent, flat, and more or less equal size, (25 x 100 feet was the standard size lot) to facilitate quick sales and rapid building.  So a grid was thrown up over the hills and dales, and at least theoretically, and in some cases, in actuality, the hills and dales were leveled.  This plan paved the way (no pun intended) for the rapid development of the city, enormous real estate speculation, and huge profits to be made.  The Commissioners were basically saying: “it is our intention to build the street infrastructure in this way, so the city will grow.  You are safe to invest in these areas, even though they are right now far, far away from the settled parts of town, because if you build it, they will come.”  And they did.
This map shaped our city in ways few other phenomena, events, or people have done.  There was more criticism than praise for the plan at the beginning, with one commentator in 1818 saying, “These are men who would have cut down the seven hills of Rome.” Thomas Janvier's book In Old New York (1894) criticized the plan as only “a grind of money-making.” Ever since then, it has been the subject of continued debate: Monotony, or convenience?  Aesthetically abysmal, or delightfully vibrant?  Limiting, or the blank canvas for creativity?  Whatever your opinion, the grid plan has made New York one of the most walkable cities in the world, as well as produced one of the most frenzied real estate markets on earth.
“Henry James condemned it a century ago as a ‘primal topographic curse.’  Rem Koolhaas, the architect and urbanist, countered that its two-dimensional form created ‘undreamed-of freedom for three-dimensional anarchy.’  More recently, two historians described its map, regardless of its flaws, as ‘the single most important document in New York City’s development.’”  (Sam Roberts, The New York Times, March 21, 2011).  I would agree with that assessment.
Interactive map of how NYC’s grid grew
Check out especially the “Street Openings Since 1642” map sequence
http://www.nytimes.com/interactive/2011/03/21/nyregion/map-of-how-manhattan-grid-grew.html?ref=nyregion&nl=todaysheadlines&emc=tha29
“200th Birthday for the Map that Made New York”
http://www.nytimes.com/2011/03/21/nyregion/21grid.html?nl=todaysheadlines&emc=tha29

“No Hero in 1811, Street Grid’s Father Was Showered With Produce, Not Praise”

http://www.nytimes.com/2011/03/21/nyregion/21randel.html?nl=todaysheadlines&emc=tha29
Article in the NY Times about John Randel Jr., the surveyors of the 1811 grid plan for NYC.

Remarks of the Commissioners for laying out the streets and roads of the City of New York, Under the Act of April 3, 1807
http://www.library.cornell.edu/Reps/DOCS/nyc1811.htm
Posted by Map Monkey at 11:18 AM