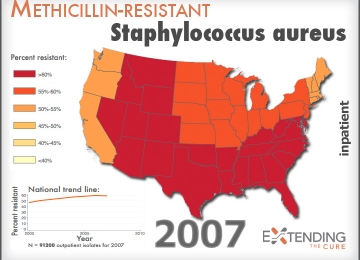 “Methicillin-resistant S. aureus (MRSA) outbreaks have been a growing public health concern since the 1960s, and in the late 2000s, MRSA mortality rates in the United States exceeded the combined death tolls of AIDS, tuberculosis, and hepatitis B," Center for Disease Dynamics, Economics and Policy, Washington DC and New Delhi.  http://www.cddep.org/resistancemap
These maps tell the story of growing resistance to commonly used antibiotics and identify regional differences in resistance levels.  The CDDEP website has a series of map animations showing various drug-bug combinations, and the spatial distribution of resistance to commonly-used antibiotic/antimicrobial drugs within regions of the U.S., 2000-2009.  The prevalence of drug-resistant strains of disease has become a matter of grave concern, since so many of these diseases are potentially fatal, especially amongst the very young, the elderly, and the immuno-compromised.  One of the reasons that this situation is so alarming to people is the fact that just being in the hospital is itself a risk factor for acquiring some of these diseases.  The potential of getting one of these diseases while in the hospital for an unrelated condition is quite high, yet we want to think of the hospital as a place where we go to be helped, healed, or cured, not to be exposed to additional problems.  The maps on the CDDEP website separate the disease rates into two categories: for those diseases acquired while in the hospital, and those acquired in the community.
Although the maps appear to be showing the data at the state level, the data are really aggregated at a coarser resolution - by the 9 Census Regions in the continental U.S.  Aggregating up to the regional level was necessary due to lack of representation of laboratories in some years in some states.  The researchers felt that their results still have validity, since they expect that states in close proximity within the same region would have similar rates.
Thanks for sending the link, Chris Herrmann!  For the animation series: http://www.cddep.org/resistancemap/paeruginosa_ceftazidime_inpatient 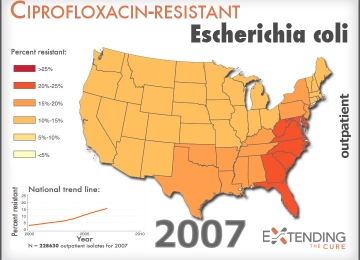 Ciprofloxacin-resistant E. coli in the United States, 2007.
Posted by Map Monkey at 10:09 AM