“From whencesoever Thou startest forth, turn Thy face in the direction of the sacred Mosque; that is indeed the truth from the Lord. And Allah is not unmindful of what ye do” (Qur'an 2:149–150). 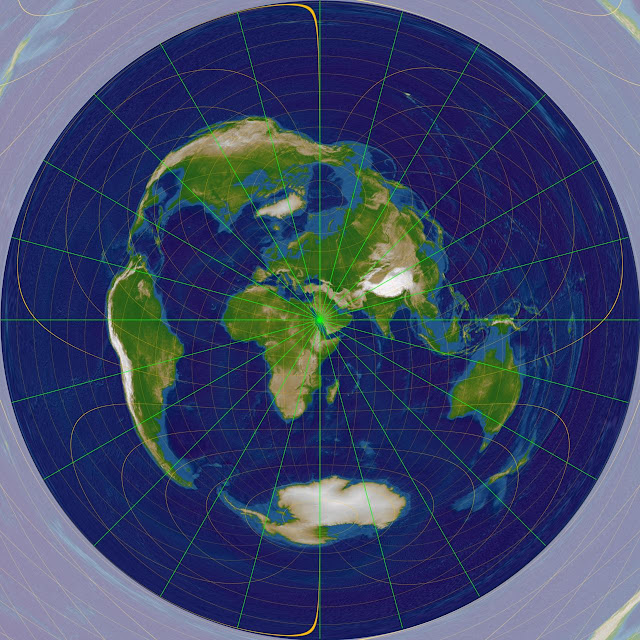 Mecca at the Center of the World
Equidistant azimuthal projection, centered on Mecca, and green lines showing the Qibla (shortest direction to Kaaba in Mecca, 21° 25′ 21″ N, 39° 49′ 34″ E)  The problem with this projection is that is shows correctly directions FROM Mecca, but not directions TO Mecca, which is what is needed to know in which direction to pray.  For that we need an entirely different kind of projection, a Retro-Azimuthal Projection.
From: http://www.geog.ucsb.edu/events/department-news/739/the-geography-of-prayer/
“Qibla (or qiblah; Arabic: قبلة‎) is an Arabic word for the direction that should be faced when a Muslim prays during Salah, the Islamic practice of formal prayer, usually performed five times a day. Since 622 AD, that direction has been towards Kaaba (The Cube), a cube-shaped building in Mecca, Saudi Arabia, which is the most sacred site in Islam. Muslim mosques are aligned with qibla, Muslims are buried with their faces in the direction of the qibla, and the fact that all Muslims pray towards the Kaaba is traditionally considered to be a symbol of the unity of all Muslims worldwide,”  (Wikipedia, Qibla).
But there are quibbles about qibla.  A July 19 CNN article comments, “Indonesian Muslims have been praying in the wrong direction, the country's highest Islamic authority has said.  The Indonesian Ulema Council told the country's Muslim populace in March to turn west when they offered their daily prayers.  Muslims are supposed to face the Kaaba, the religion's most sacred site in the city of Mecca in Saudi Arabia.  At the time, the council said that the direction of Kaaba from Indonesia laid to the west.  Turns out, it didn't.  Africa did.  So, on Friday, the council issued a new edict: face northwest.”
Qibla has always been somewhat problematic.  “The determination of the qibla has in the past exercised the minds of the greatest astronomers, geographers, and mathematicians of the Islamic world.  Already in the late 8th century, sophisticated mathematical solutions were developed that were based on spherical trigonometry and the geographical knowledge of that period.  The most commonly adopted algorithm was based on the great-circle path (or shortest-distance path) connecting the observer with the Ka‘ba in Mecca and determining its angle with the direction to North” (“Determining the Sacred Direction of Islam,” from: http://www.staff.science.uu.nl/~gent0113/islam/qibla.htm)
“Several Muslim mathematicians and astronomers, such as Abu Rayhan Biruni, have discussed the correct way of determining the Qiblah direction from any point on the Earth's surface.  They agree that at the two moments in each year when the sun is directly overhead the Kaaba, the direction of shadows in any sunlit place will point directly away from the Qiblah. This happens on May 27 or May 28 at 9:18 GMT and on July 15 or July 16 at 9:27 GMT. Likewise there are two moments in each year when the Sun is directly over the antipodes of the Kaaba.  This happens on January 12 or January 13 at 21:29 GMT and on November 28 at 21:09 GMT.  Because the Earth is almost a sphere, this is almost the same as saying that the Qiblah from a place is the direction in which a bird would start flying in order to get to the Kaaba by the shortest possible way,” (Wikipedia, Qibla).
“The Craig retroazimuthal map projection was created by James Ireland Craig in 1909. It is a cylindrical projection preserving the direction from any place to another, predetermined place while avoiding some of the bizarre distortion of the Hammer retroazimuthal projection. It is sometimes known as the Mecca projection because Craig, who'd worked in Egypt as a cartographer, created it to help Muslims find their qibla. 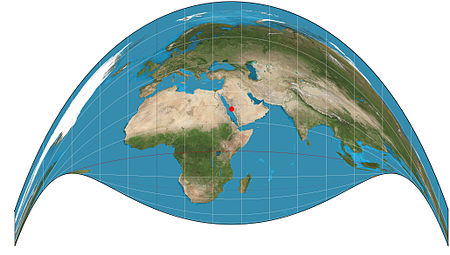 The Craig Retro-azimuthal (aka "Mecca") projection.  "Centred on Makkah, you can measure the great-circle azimuth to Makkah from any other point on the map by measuring the angle from the vertical.  Like all retroazimuthal projections, distortion is high near the edges, and there are unusual 'wrap around' effects, seen here as an overlap in the reticle at the bottom of the map." 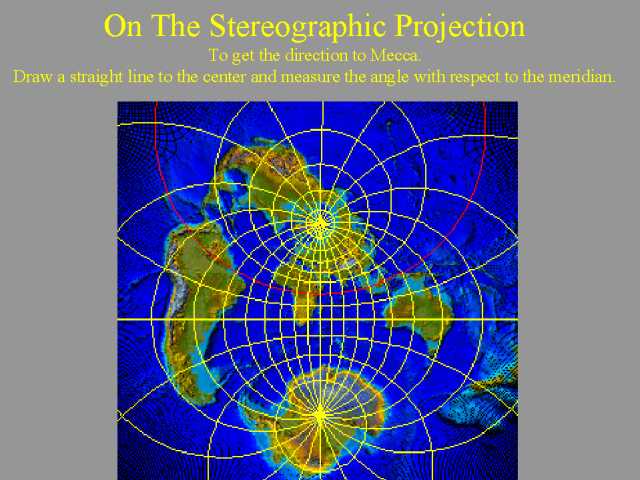 “A stereographic projection taken from Waldo Tobler’s PowerPoint presentation.  As Waldo notes in his article, ‘Qibla and Related Map Projections,’ ‘The Qibla problem - determination of the direction to Mecca - has given rise to retro-azimuthal map projections, an interesting, albeit unusual and little known, class of map projections.’”
Today, there are several web sites devoted to finding qibla from any place on earth; for example, a web site called Earth Islamic claims to be “the first satellite-map based Qibla locator service and allows you to “find Qibla direction at any point on Earth accurately.” Debates about finding qibla from space (there have been several Muslim astronauts) resulted in a conference sponsored by the Malaysian National Space Agency in 2006 to address the issue; the conference concluded that the astronauts should determine the location of the qibala "according to [their] capability," and the Grand Ayatollah Ali al-Sistani has stated that Muslim astronauts should face the direction of the Earth (Wikipedia, Qibla).
Waldo Tobler published an excellent article on the subject in 2002 (W. Tobler, 2002, Qibla and Related Map Projections, Cartography and Geographical Information Systems, 29(1): 17-23) at http://www.geog.ucsb.edu/~tobler/publications/pdf_docs/cartography/projections/QiblaProjs.pdf
This is VERY interesting!  Check it out!  A PowerPoint presentation Waldo gave relating to the article can be found here:  http://www.ncgia.ucsb.edu/projects/tobler/Qibla/sld001.htm
Article above by Bill Norrington - http://www.geog.ucsb.edu/events/department-news/739/the-geography-of-prayer/ 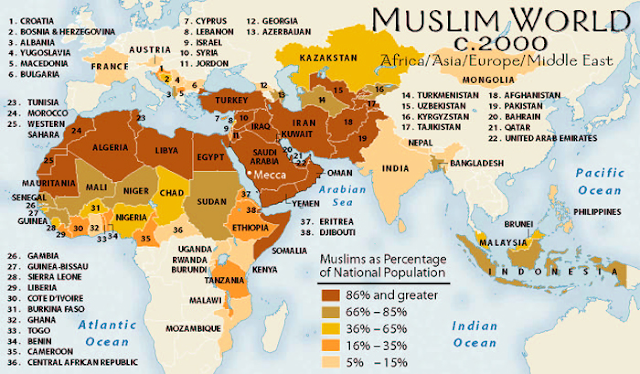 And although this is supposed to be the MAP of the Week, not the MAPS of the Week, I couldn't resist adding this rather nice depiction of the distribution of Muslim population in Africa, Asia, and Europe.
Also, see post "We Have a Winner!" for information about the Map Projection Contest which featured the mystery map projection, aka the Craig Retro-Azimuthal projection.http://geographer-at-large.blogspot.com/2011/09/we-have-winner.html