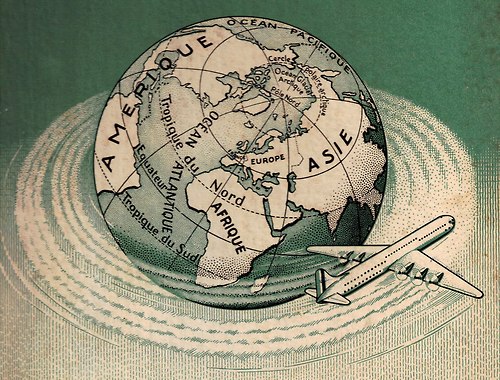 from a 1956 French Geography Textbook
OK, folks, another milestone has been reached by my blog – I have made it to 100 posts!  This one constitutes my 101st posting!  My stats have changed since I wrote the last milestone post at the 6-month mark back in June, 2011.  http://geographer-at-large.blogspot.com/2011/06/six-month-mark-of-geographer-at-large.html And I have started a new feature called the Map of the Week, which is a lot of fun for me to put together, since it involves just looking for, finding, and researching about interesting maps and other types of geographic images and data visualizations.  And we just successfully ran our first map-inspired contest.  http://geographer-at-large.blogspot.com/2011/09/we-have-winner.html
Blog Statistics:
Other than that, blog statistics have been changing, too.  The first month of the blog back in January, 2011, attracted about 1,500 page views, whereas now the blog’s highpoint numerically was August, 2011, with 13,332 page views for the month.  Daily high was on August 25th with 3,318 page views.  This was due to the impending hurricane, and the hurricane maps I had posted.  Almost all of these viewers were from the NYC metro area and the rest of the northeast.  It looks like we will finish up the month of September with about 11,000, based on the current 9,000+ page views as of this morning.  Overall total page views for “all time” is 51,000+.  And recently, the average daily has been around 400-500.
Favorite Posts (by number of page views):
The “All Time” favorite postings are as follows,
Some of my personal favorites have come off the 6-month mark list, old stalwarts like “Kodachrome and the Great Depression,” http://geographer-at-large.blogspot.com/search/label/Great%20Depression and “Mapping Urban Inequality: Using the GINI Coefficient to Measure the Urban Divide” http://geographer-at-large.blogspot.com/search/label/Gini%20coefficient but new ones have joined the list, such as “Unconventional (yet informative!) Maps of the Big Apple,” and, somewhat inexplicably, “Fun with Map Projections: Oblique Case.”
Blog viewers:
The blog’s highest viewing country remains the United States, with over 33,000 page views, followed by the UK, Canada, Australia, Germany, Greece, France, India, the Netherlands, and South Africa.
The blog’s highest viewing individuals are from (in no particular order) New York, NY; Brooklyn, NY; Mesa, Arizona; Johannesburg, South Africa; Emerson, NJ; Cincinnati, OH; Forest Hills, NY; Athens, Greece; and Barcelona, Spain.  The highest individual page viewer visited the site more than 500 times.  It wasn’t me!  I have elected not to track my own page views or have them counted in the totals.
The map of blog viewers’ countries has been significantly filled in from last time.  As you may recall, at the 6-month mark I was lamenting that no one from geographically large countries like Ethiopia and Kazakhstan had pinged in, and now they have!
People in a total of 155 countries have viewed the blog, including new-timers such as Iceland, Papua New Guinea, Armenia, Swaziland, Botswana, Senegal, Monaco, and Guernsey.  I am now just waiting for some last hold-outs, like Antarctica, Vatican City, Andorra, Tajikistan, Gaza, Gibraltar, Myanmar, Pitcairn Islands, and St. Pierre and Miquelon!
Search Terms
One thing that I’ve been looking at more “scientifically” is the type of search terms that bring viewers to my blog.  Most of them are fairly normal and straightforward, like “flat globe projection,” or “Indiana Jones World Map,” or “Desert tortoise habitat map.”  But then there are MANY others, and some are so funny!  Either they are from people who don’t know how to use search terms, or, well, I don’t want to be insulting, but I do have to wonder at some of these.  I have collected some of the more strange and hilarious ones for your amusement.
Funny Google search terms that led to my blog
first i was in france for short visit :p but i wasn't happy there  [This has got to be one of the best search terms I have ever seen!]
tiger poops japan [OK, in a weird way, I understand this one! AND – it actually matches up with an image in one of my blog postings on zoomorphic satirical maps.]
maps of jewish countries [are there many of these Jewish countries?]
continents duck [huh?]
dog with globe {again, huh?]
world map north American deserts [why do you need a world map if you are interested in just American deserts?]
where's puerto rico on a map [There were many searches asking for where is some place or another on a map.  I am not sure what is wrong with these people.  I could understand it a little bit if the places they were looking for were remote or unusual, but c’mon!  Puerto Rico? Really?]
where is tombo on a map? [this is like “where’s Waldo?”  Where is Tombo, anyway?  It turns out, it is not really a place, but a language, one of the Dogon languages of Mali in west Africa. Interestingly enough, especially considering my love of these creatures, it is also the Japanese word for dragonfly!]
where's wall street map [getting tedious now]
hipsters are the source of all problems in the world [yes, we can all agree on this, but why are you searching on those words, anyway?]
goddess homolosine  [they most probably meant Goode’s homolosine, but believe it or not about 12 people searched with the same mistaken spelling!]
map of the north pole its vegetation – [yeah, good luck with finding anything much on that one!]
not happy  [what on earth was this person searching for? And what post on my blog did they match THIS up with?]
ancient print feathers 1854  [HUH?]
Hookerville, central park [pretty sure they meant “Hooverville” but maybe there was a Hookerville in Central Park, as well! Anyway, their search term led them to my post about the Depression and Kodachrome, where I talk briefly about Hoovervilles around the country, so I hope they found what they were looking for]
Posted by Map Monkey at 1:10 PM