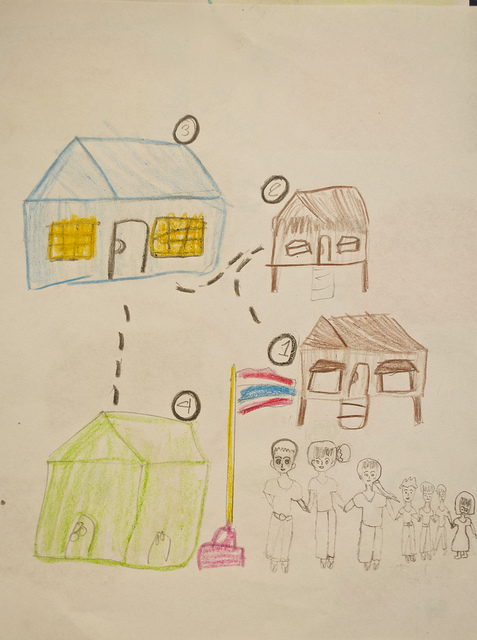 “The first place I lived was at my home with all of my brothers and sisters – those there people are my family.  But we have many children, and I am the youngest, so I left to go to my relative’s house.  After that, I lived with my friend before coming here to attend school.” From: http://bordersphotography.tumblr.com/tagged/Week_Five
“This project represents an attempt to examine the impact of forced migration on ethnic minority children from Burma.  Using an anthropological approach that depends heavily on the use of art and photography, the project will address questions of personal, communal, regional, and national identity.
Assignment Five: Migration Map
Draw a map of the different places you’ve lived, starting with where you were born, and ending with where you live now.  Label each place with its location or who you lived with there, and place it on the map.
“This week I followed up with the previous mapping activity, only this time asking the children to expand the scale of their maps instead f focusing on one community, this assignment asked the children to map the different places they have lived since they were born, thus creating a map of their migration experiences.  For children born in eastern Burma, extensive migration in the norm, a report released in 2010 entitled Displaced Childhoods, explains:
‘A generation of the country’s children have been scarred by death, destruction, loss, and neglect at the hands of Burma’s military.  For over four decades, Burma’s military government has forced children from their homes and villages, subjected them to extreme human rights violations, and largely left them to fend for their survival in displacement settings without access to basic provisions or humanitarian services.
Since 2002, Free Burma Rangers (FBR) has independently documented over 180 incidents of displacement, and for the last 14 years both Partners and FBR have procided lifesaving humanitarian service to thousands more.  From 2002 to the end of 009, more than 580,000 civilians, including over 190,000 children, have been forcibly displaced from their homes in Eastern Burma alone.’
An estimated one to three million people live as internally displaced persons (IDPs) throughout Burma.  As many as 330,000 to 990,000 of the displaced are children.’  From: http://www.freeburmarangers.org/Resources/Docs/Displaced%20Childhoods%202010%20WV2.pdf
"These statistics are certainly true for my students, regardless of their reasons for leaving their homes.  From this activity, I learned that my students averaged four homes before coming to their current one ( a boarding-type home for students attending a local school).  While all students generally started out life in a traditional family home, other “homes” children included on their maps were varied – from grandparents’ homes, to churches and monasteries, to school homes.”  Text and Images from http://bordersphotography.tumblr.com/tagged/Week_Five 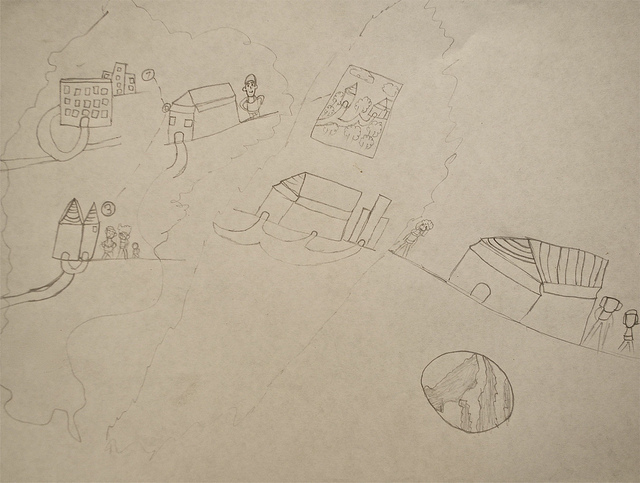 “The first place I lived was in Burma, then moved to a city in Thailand.  Now I live here.  I drew a globe here because I have lived in so many places.”
Note from the Map Monkey:  Although I find these maps extremely interesting on many levels, and I understand the researcher is trying to assess the impact of forced migration on the children through the use of creative visualizations, I also wonder how traumatic it might have been for the children to draw these maps and possibly relive the loss of homes, family, safety, and be graphically reminded of all the suffering and deprivation they have had to endure.  On the other hand, perhaps drawing the maps was somewhat cathartic for the children.  I hope so, otherwise, it seems that the children are just being exploited a little more here. I hope the researchers got IRB approval for this study! 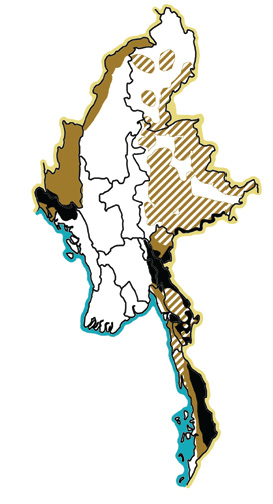 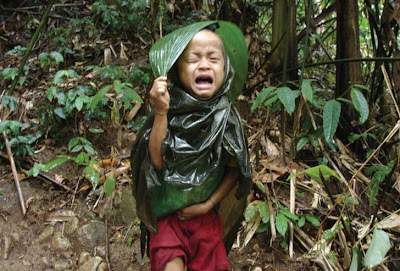 Boy in the rain, fleeing from the Burma Army.
Map and Photo from “Displaced Childhoods”
Posted by Map Monkey at 10:41 PM