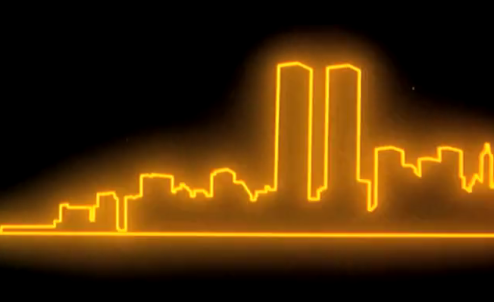 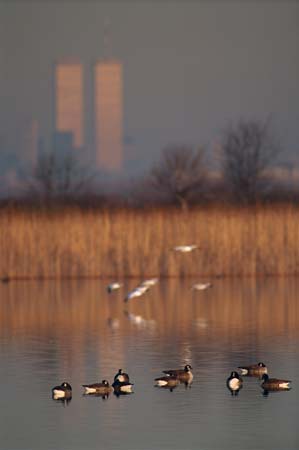 I also remember the time in 1974 that Philippe Petit, the French high-wire artist, walked the 140 feet between the roofs of the North and the South Towers on a steel cable and then was promptly arrested.  NYC held its collective breath for the 45 minutes that it took for him to make the journey.  This act was featured as an iconic 1970’s NYC event in the fabulous book “Let the Great World Spin” by Colum McCann, and was also made into a documentary movie “Man on Wire,” http://www.manonwire.com/ 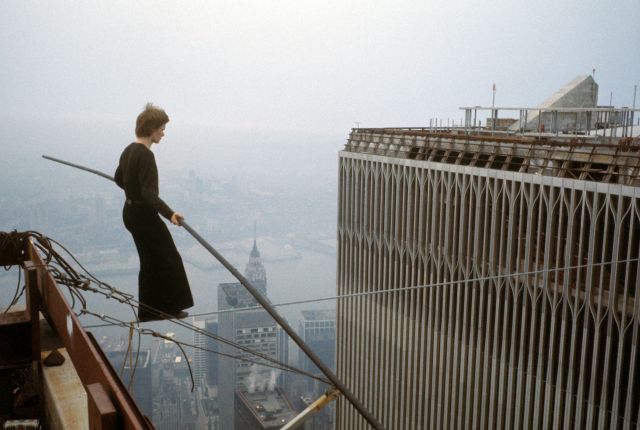 Photo from http://gothamist.com/2008/07/24/philippe_petit_man_on_wire.php, which also contains an interview with Petit.
Of course, the loss of any building, even two of 110 stories each, and six more smaller towers thrown in for good measure, pales in comparison to the loss of human life that occurred on September 11th, 10 years ago.  Two former work colleagues of mine who had taken "good" jobs in the WTC perished in that awful day, and every 9/11 anniversary during the reading of the names, I wait to hear their names read off the list of thousands.  Ezra Aviles and Peter Guylavary.  I still wonder about the wisdom of replacing the WTC with the Freedom Tower.
Ten years ago, I remember looking out my windows on Washington Street, and watching hundreds of zombie-like office workers, some toting attaché cases and briefcases, covered head to toe in grey ash, trudging uptown, since there was no other transportation option that day.  I remember being frightened and not knowing what to do, whether or not to evacuate, and if so, where to go, and how to get there?  How to transport my three cats and all my turtles on the handles of my mountain bike?  I remember obsessively cleaning my coffee machine like a maniac, just to do something mindless so I didn’t have to think about what was going on.  I remember breathing the awful fumes for weeks and weeks, and recalling from my work on the building years before how it was filled with asbestos.  I remember passing St. Vincent’s Hospital and seeing hundreds of missing persons flyers posted with people’s photos and descriptions, and how it took us many days to realize that there weren’t any missing persons, just dead persons.  The flyers became more and more tattered as time went by, but no one removed them.  How all the First Responders had flooded into NYC from surrounding areas and far away, how we all stood along the West Side Highway every evening and cheered the firefighters and others from around the country as they rode uptown after working crazy-long and dangerous shifts at Ground Zero, the newly-minted name for what had been, until just a few days before, the WTC.  I remember the gut-wrenching feeling I got the first time I passed by my corner on the way home and looked to my left downtown and didn’t see the Twin Towers standing there anymore, obstructing my view of the sky, just a smoldering pit, and it smoldered for months.  The strange feeling I got the first time I saw an “E” train enter the station, with the sign in the first car pronouncing it was heading to “WTC,” which existed no more.  How we didn’t know if there would be another attack, or how soon.  When life would ever return to normal (it never really did). 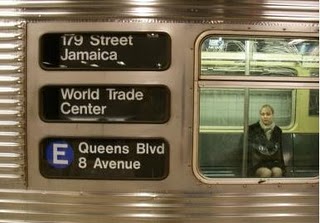