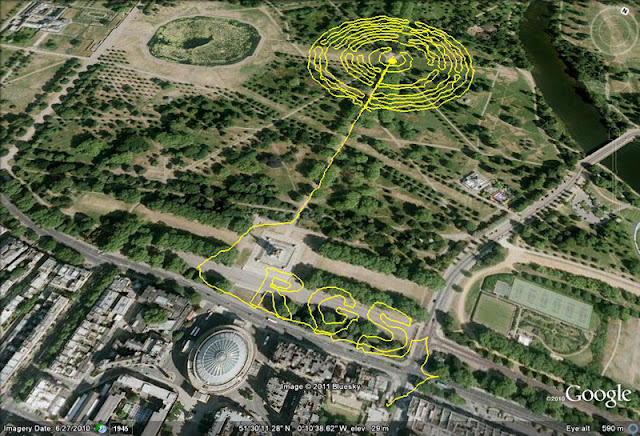 Drawing made with GPS tracking in Hyde Park near the Royal Geographical Society headquarters in London.  It has the letters “RGS” and this year’s RGS/IBG conference logo mapped out.
“I record all my journeys with GPS to map where I have been and how I got there.  It is a form of personal cartography that documents my life as visual journal....The GPS model was created as a physical reference to a history of geograms that can be traced back to the Nasca Lines made in Ancient Peru and the chalk figures carved into the English landscape. In both cases they were made by either clearing a path by the removal of stones or of topsoil over large areas. They revealed signs, not entirely visible from the ground, projected towards the skies like symbols on a map to be seen by the gods,” Jeremy Wood, artist
“Artist Jeremy Wood will be in residence at the Royal Geographical Society (with IBG) in London this week as he turns Hyde Park into a blank canvas for almost 1,500 delegates at the Society’s annual International Conference [August 31-September 2, 2011].
Using global positioning system (GPS) satellite technology, Jeremy creates art works by turning his journeys by foot, bicycle and train into fascinating shapes, patterns and words. Tracking his every move for the last nine years, Jeremy is never without the GPS devices that inspire his art.
'The theme of this year’s conference is the ‘Geographical Imagination’ and I want geographers to show me what they can create,' Jeremy said. 'The images I’ve created over the years explore people’s perception of open space – the places they can go and places they can’t are all reflected in the images. Buildings and other restricted areas become blank spaces while roads and other routes are filled in to reveal the image.'
Using Hyde Park and Kensington Gardens opposite the Society’s headquarters in London, geographers attending conference from across the world will be able to create their own works of art. Select images will appear Jeremy’s website (www.gpsdrawing.com).
Jeremy first had the idea for his GPS art when flying back to London and tracking the places on the ground below with his GPS device. Trapped in a holding pattern above London’s Heathrow Airport, images began forming on his GPS screen and it wasn’t long before he realised the application for this down on the ground.” Text from “Walk this way for geographical art,” at
http://www.rgs.org/NR/rdonlyres/F34818CF-D6CD-4DD1-A026-4512E12A54E9/0/110901Walkthiswayforgeographicalart.pdf 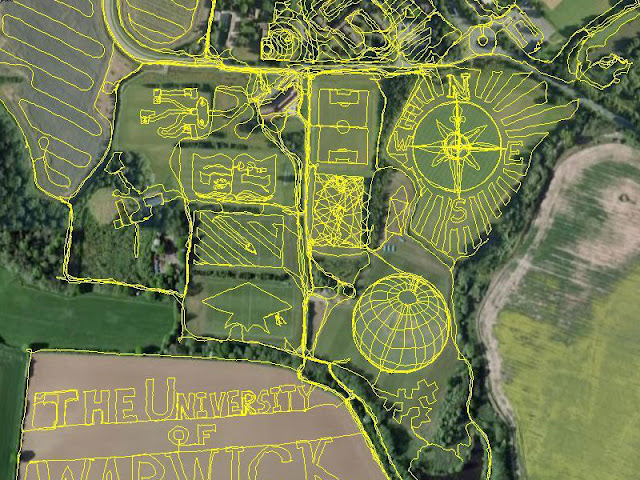 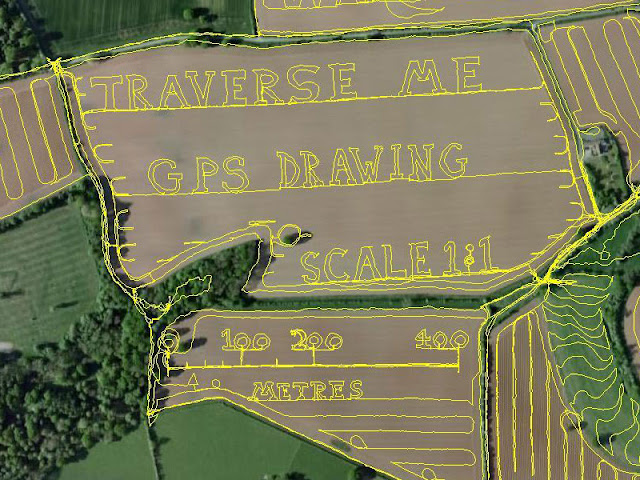 Example of a GPS drawing by Jeremy Wood from the GPS Drawing Gallery.  The University of Warwick campus map was drawn on foot at 1:1 scale with 238 miles of GPS tracks walked over 17 days. From: www.gpsdrawing.com. It gives new meaning to the term "full scale map!"
"'Traverse Me' is a map drawn by walking across campus with a GPS device to invite the viewer to see a different landscape to that which surrounds them.  It questions the possibilities of where they are and inspires a personal reading of their movements and explorations of the campus.  I responded to the structure of each location and avoided walking along roads and paths when possible.  The route was recorded with GPS technology and was walked in stages over the 300 hectare site.  My shoes turned brown in the dry fields and they turned green in the long grass.  The compass rose and the globe were paced out over cricket pitches, and the scale was measured along a narrow tractor rut.  I collided with objects and buildings, barriers and footpaths, and traipsed over the tops of multi-story car parks.  Security was called on me twice on separate occasions and I lost count of how many times I happened to trigger an automatic sliding door,"  Text from: http://www.gpsdrawing.com/maps/traverse-me.html 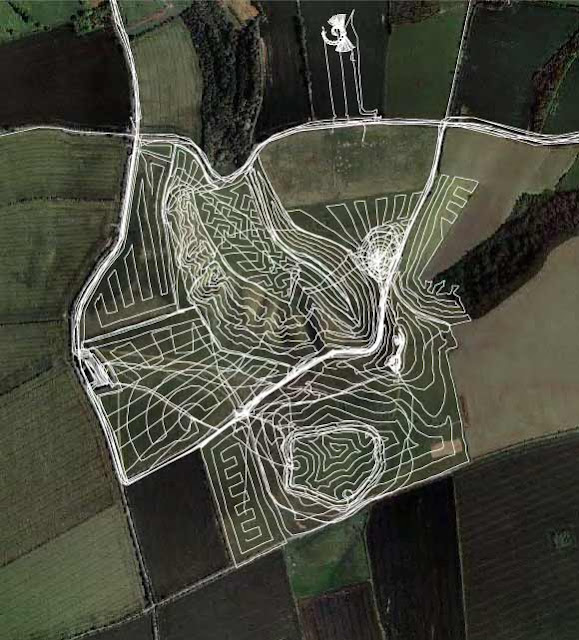 And this one is truly incredible - it was done at Uffington - the famous White Horse Hill.  Check it out (there's also a video about the project) at http://www.gpsdrawing.com/gallery/maps/whh-model.htm   “The model displaces our trajectories by a transferral of surfaces. It is a three-dimensional map of our systems of movement within 43 kilometres of walks made over four days. We acted as data collectors by traversing the area in order to generate the material to model the experience.  Our GPS tracks were processed and reduced in scale by 1000 times and printed as templates on cardboard sheets. They included a plan view of the journey (track position), and many strips of various lengths (distance) and widths (altitude). On each strip were score-lines with colours that indicated the varying degrees of change in the direction of the track.”