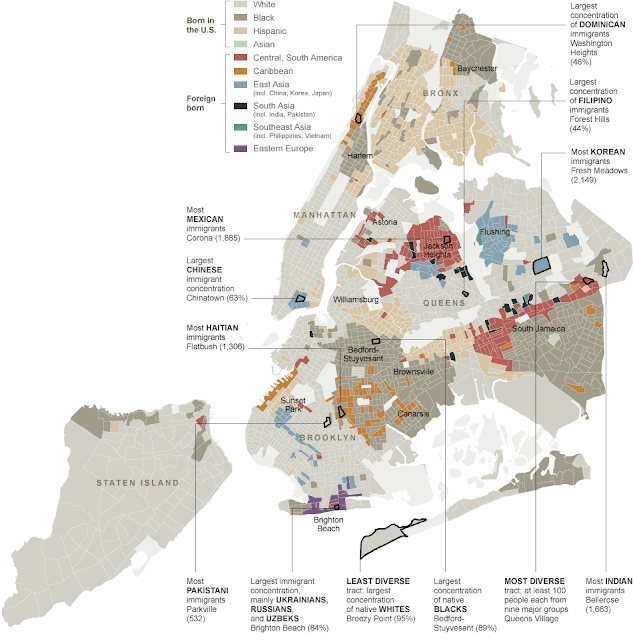 New York’s Shifting Ethnic Mosaic
From the New York Times, January, 2011.  http://www.nytimes.com/interactive/2011/01/23/nyregion/20110123-nyc-ethnic-neighborhoods-map.html
Where's the new "Little Italy"? How many Chinatowns are there?  What about “Little Poland”?  “Little Guyana”?  It turns out that aside from the obvious ethnic neighborhoods we all know about in NYC (and the ones the tourists visit most often), there are dozens of other ethnic enclaves.
This is an interactive mapping project that ordinary folks can contribute to.  A group called Social Explorer has been compiling data from the new census (American Community Survey 2000-2009) and has created some interactive maps.  You can explore the data and maps, find enclaves by ethnicity, and also listen to the podcast of the radio shows on WNYC – every Thursday in June, apparently, they have been featuring a different section of the city.  You can also add data if you have particular information about ethnic group locations.
The Interactive map is at http://www.wnyc.org/shows/bl/blogs/scrapbook/2011/jun/02/new-littles-exploring-nycs-ethnic-communities/
A census tract is represented as an enclave if it contains a concentration of 20% or more of any one nationality or “ancestral group” (not exactly sure how that is defined).
“Artists: Help Draw The "New Littles" New Map” from the website:  http://www.wnyc.org/shows/bl/clusters/2011/jun/02/june-guest-andrew-beveridge-and-new-littles/
“Over the course of our New Littles project, we've identified some of New York's overlooked ethnic communities.  Now, we want artists and illustrators to draw a new neighborhood map. Our favorites will be featured on the WNYC website and on-air during the Brian Lehrer Show. Upload your artwork directly below, or post a link in the comments page. Here are some of the neighborhoods you may want to include:
»» Little Colombia in Jackson Heights, Queens
»» Little Italy in Astoria, Queens
»» Little Pakistan in Coney Island, Brooklyn
»» Little Guyana in Richmond Hill, Queens
»» Little Thailand in Elmhurst, Queens
»» Little Panama in Crown Heights, Brooklyn
»» Little Albania in Staten Island
»» Little Haiti in Canarsie, Brooklyn
»» Little Germany in Glendale, Queens
»» Little Senegal in Highbridge, Bronx or Fort Greene, Brooklyn
»» Little Tibet in Woodside, Queens
»» Little Turkey in East 40s, Manhattan
»» Little Brazil in Astoria, Queens
»» Little Liberia in Staten Island
»» Little Uzbekistan in Ocean Parkway, Brooklyn
»» Little Turkey in East 40s, Manhattan
They also give helpful examples of what kind of maps they have in mind, such as this 1950’s embroidered cartoon map of NYC.  It’s quite nice, but C’mon, now!  That might be OK for “artists and illustrators” but I think we geographers and cartographers should take up the challenge!  Maybe one or two of you with time on your hands this summer will submit an entry about YOUR neighborhood. 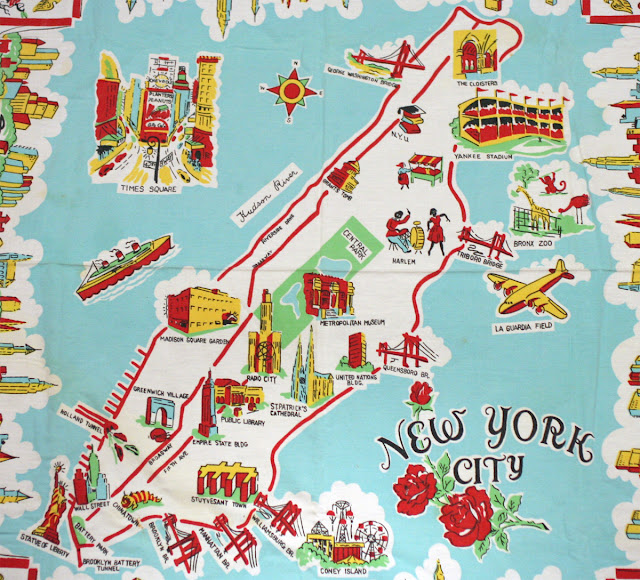 Thanks, Kristen Grady, for sending the links.
Posted by Map Monkey at 8:32 PM