The Universal Addressing System – gets rid of street geocoding forever!

Here’s a partial look at how it works.  For full details, see the NAC website: The Natural Area Coding System at http://www.nacgeo.com/nacsite/documents/nac.asp
Here is something that may strike happiness in the hearts and minds of all you GIScers.  It may eliminate the need for lat-long, UTM, geocoding by street address, etc., while providing a way to georeference locations at a very fine resolution, with just 10 digits representing an area of 1.2 x 0.8 meters.  Anywhere on the face of the Earth!  It’s called the Natural Area Coding System.  You can just imagine the benefits of having one set of accurate georeferenceing systems for the entire world.
“The Natural Area Coding System is a new geodetic system with its origin at the earth gravity center and axis extending to the infinitely distant universe.  It employs a character set consisting of digits 0 to 9 and all English capital consonants since these characters are the most popular characters widely used in natural languages such as English, French, Spanish, German, Chinese, and all categories of science and engineering. Each character in the character set represents an integer ranging from 0 to 29…..The efficiency of the Natural Area Coding System is so significant that it can save 50% of memory for geodetic points, 75% for line sections, 87% for NAC areas and 94% for NAC regions,” (From the website: The Natural Area Coding System at http://www.nacgeo.com/nacsite/documents/nac.asp)
Flash presentation of the system: http://www.nacgeo.com/nacsite/documents/nacflash.htm
Find the NAC code for your address at: http://www.travelgis.com/geocode/  For the Washington Monument in Washington, DC, for instance, the NAC is 8KDBH PGFDH 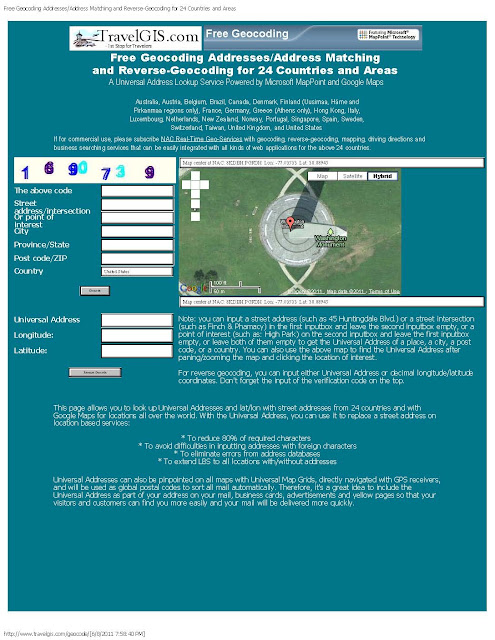 Thanks, Dellis Stanberry, for forwarding the e-mail from the surveyor company.
Posted by Map Monkey at 8:22 PM