This is a humorous animated cartoon about the Google Earth guys, you know, those people who go around everywhere with their special equipment and photograph everything IN THE ENTIRE WORLD!!!!!
This video shows you, once and for all, how the Google Earth guys do it!  The cartoon is by my new favorite cartoonist, Dan Meth, but be forewarned!  It is not politically correct (may cause offense to North Koreans - any Asian people, actually - British people, and Al Qaeda fans, among others!), and has some very juvenile frat-boy humor (e.g. poop humor).  To prevent any possible offense to those with delicate sensibilities, and to give you an idea of the content, the tags that Dan has given to this video are as follows: danmeth, osama bin laden, haha, fuck you asshole, axis of assholes.  If any of those topics shock you, DO NOT WATCH THIS VIDEO!  It’s actually pretty benign, in my opinion, but I don’t want to get any hate mail!
Check out the part where they fall asleep in the balloon, and just at that moment, Superman, a Pterodactyl, and a hot air balloon made up of multi-colored party balloons waft past.  Just goes to show, those Google Earth guys don’t catch every single little thing!
From: http://danmeth.com/post/5132560363/osama

Here's one of Dan's static cartoons, from an upcoming book on "How Things Work."  Should be interesting! 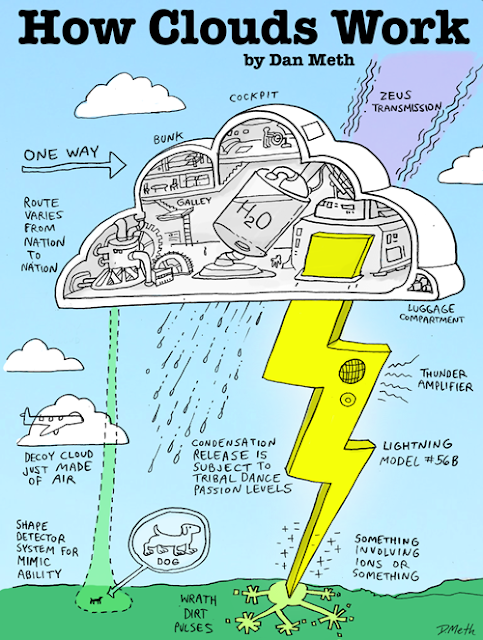