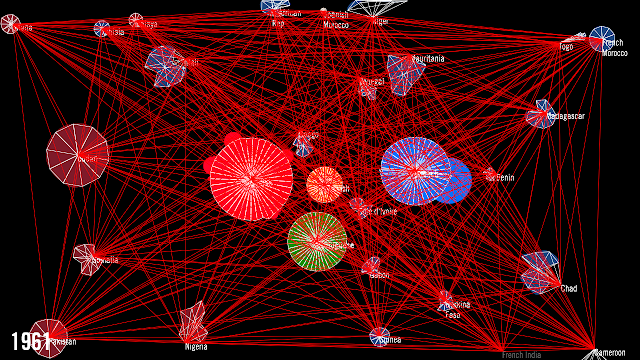 
This is a cool visualization about world empire dissolution.  It looks at the four major maritime empires of the 19th and 20th centuries, (France, Great Britain, Spain, and Portugal) and shows their relative size as the various colonies and territories break off of the mother countries.  It is very amusing visually, since when the colonies become independent, the mother countries start jiggling and bubbling, and then the colonies pop out and float away.  Either the empire is giving birth to the newly independent nations, or excreting them out - one is not sure about the symbolism here.
Most of the action takes place in a couple of concentrated time periods.  The 1820’s, when many of the South American colonies gained their independence from Spain and Portugal, and the 1920's-30's.  But there is a veritable explosion in the late 1950's-1960’s, when many of the African and Asian countries became independent of France and Britain.  And check out the way the French Empire gets very large after it absorbs all those West African Francophone countries in the late 19th century after the Berlin Conference, where the African continent was carved up amongst the major Euproean powers of the time - France, Germany, Belgium, Britain, Portugal, and Spain.
I did find a couple of oversights and mistakes, such as no sign of Haiti in 1804 popping out of the French Empire, and Cuba breaking off from Spain too early.  And if you look at the comments on the YouTube website you will find many more errors pointed out, a number of which are actually incorrect, and the animators had it right in their version.  A number of viewers chastised the animators for failing to include the American colonies leaving the British Empire, but the animation doesn’t start until 1800.  Duh.  And a number of viewers also took the animators to task for not including other empires, such as the Dutch, Russian, and American Empires, which led to a heated discussion about whether or not the United States could be said to have (or have had) an empire.  And some geniuses wanted to know where were the Turkish, Persian, Roman, you-name-it empires.  HELLOOO!  Major 19th and 20th century Maritime Empires? Clearly, you can’t please everybody on YouTube!
Despite all the critiques and second-guessing, I find this a very satisfying visualization, even though it is not, strictly speaking, a map. For the best effect, and so that you see everything, watch it full screen on YouTube.  The download loses some quality. 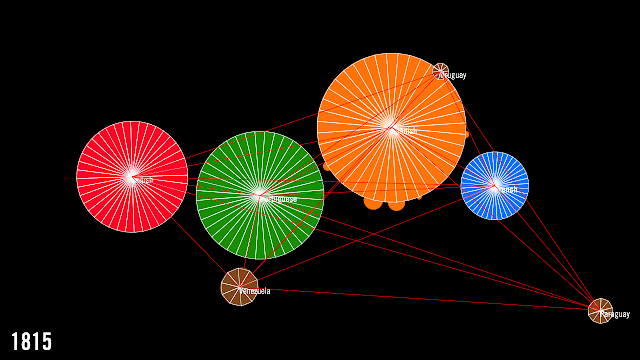 From the animators: “This is mainly an experimentation with soft bodies using toxi’s verlet springs in Processing.  The data refers to the evolution of the top 4 maritime empires of the XIX and XX centuries by extent. The visual emphasis is on their decline.  The first idea was to visualize the decline of the maritime empires. Along with that came the idea of fluid and timeless boundaries, and thus some kind of soft bodies dissolution.
Those are some screenshots displaying the springs in the system.  In white we have the springs that form each shape’s skeleton. There are other more robust configurations but as the forces were minimized the shape kept its body like behavior. The collisions were implemented using the red springs — center to center connections that repulsed at a minimum distance.
The data refers to the evolution of the top 4 maritime empires of the 19th and 20th centuries by land extension. I chose the maritime empires because of their more abrupt and obtuse evolution as the visual emphasis is on their decline. The first idea to represent the independence of a territory was a mitosis like split — it’s harder to implement than it looks. Each shape tends to retain an area that’s directly proportional to the extent of the occupied territory on a specific year. The datasource is mostly our beloved wikipedia.  I chose to pick the dates where it was perceived a de facto independence (e.g. the most of independence declarations prior to the new state’s recognition). Dominions of an empire, were considered part of that empire and thus not independent.
I don’t wanna call this small experiment information visualization neither information art. Either way sounds too pretentious — information aesthetics, perhaps?. Nevertheless, it works very well as a ludic narrative. I ultimately found it very joyful." Text from: http://pmcruz.com/visual-experiments/visualizing-empires
Posted by Map Monkey at 2:34 PM