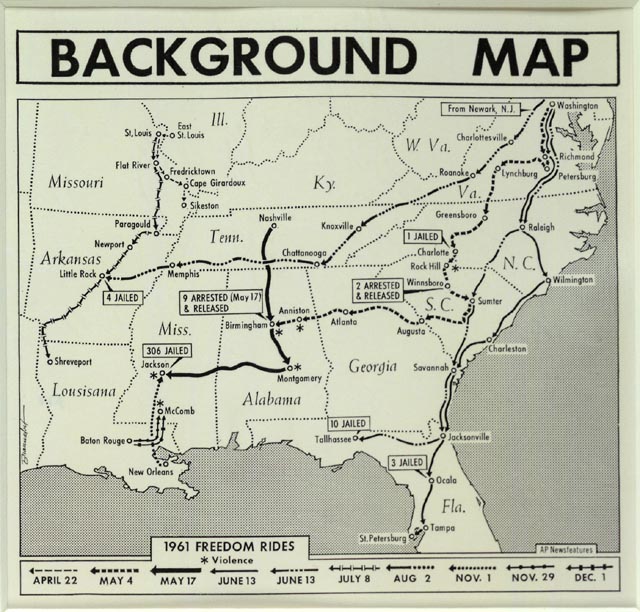 Map of 1961 Freedom Rides and associated violence against the Riders (Associated Press, 1962)
“The Freedom Riders of the early 1960s, organized by the Congress of Racial Equality (CORE), rode through the South seeking integration of the bus, rail, and airport terminals. This Associated Press release, authored by Sid Moody, includes a map and an exceptionally descriptive text that illustrates the routes taken and the history behind the freedom rides.  Together, the map and text record the individual cities visited, when and where violence occurred, and how many Freedom Riders were arrested.  The text also describes some disturbances resulting from the staged sit-ins and forced recognition of CORE's causes and issues.  Looking at the map and reading the text, one can perceive the struggles that these Freedom Riders endured in their quest for full citizenship in 1961.” (From: African-American Odyssey at:  http://memory.loc.gov/ammem/aaohtml/exhibit/aopart9b.html
The original map and text of article can be viewed at: http://www.loc.gov/exhibits/treasures/trr071.html


Interactive map with timeline of the resulting violence against the Freedom Riders:
http://www.tripline.net/trip/Map_of_the_Freedom_Riders_Route-1657536071131003B660B6A5907EC2AD 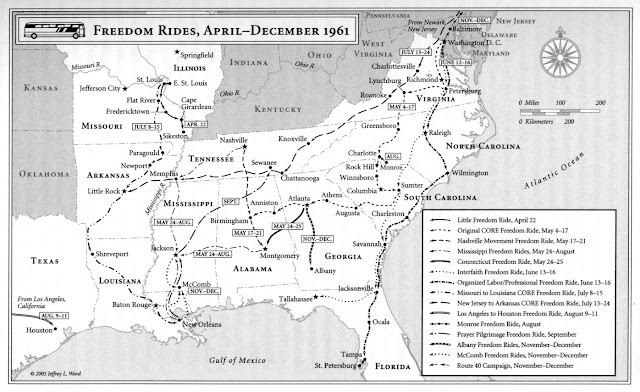 The Freedom Rides of April – December 1961 followed on the heels of the 1955-1958 Montgomery, Alabama bus boycott, the February, 1960 sit-ins at the Woolworth lunch counters, and other non-violent protests against segregation.  The Rides preceded the 1963 March on Washington, DC, in which a quarter million people participated.  The March was, of course, the occasion when a young preacher named Martin Luther King Jr. (the leader of the bus boycott) gave his now-famous “I Have a Dream” speech.  These events led to the Civil Rights Act of 1964, the Voting Rights Act of 1965, and eventually to the Civil Rights Act of 1968, also known as the Fair Housing Act.

Interactive map retracing the Freedom Riders’ rides through the deep south:
http://www.pbs.org/wgbh/americanexperience/freedomriders/rides
Freedom Riders (Extraordinary, Ordinary People who Changed History) will be shown on PBS TV stations tonight (May 16th) at 9:00 PM Eastern time
About the PBS film "Freedom Riders":
“FREEDOM RIDERS is the powerful harrowing and ultimately inspirational story of six months in 1961 that changed America forever. From May until November 1961, more than 400 black and white Americans risked their lives—and many endured savage beatings and imprisonment—for simply traveling together on buses and trains as they journeyed through the Deep South. Deliberately violating Jim Crow laws, the Freedom Riders met with bitter racism and mob violence along the way, sorely testing their belief in nonviolent activism.
From award-winning filmmaker Stanley Nelson (Wounded Knee, Jonestown: The Life and Death of Peoples Temple, The Murder of Emmett Till) FREEDOM RIDERS features testimony from a fascinating cast of central characters: the Riders themselves, state and federal government officials, and journalists who witnessed the Rides firsthand. The two-hour documentary is based on Raymond Arsenault's book Freedom Riders: 1961 and the Struggle for Racial Justice.
Despite two earlier Supreme Court decisions that mandated the desegregation of interstate travel facilities, black Americans in 1961 continued to endure hostility and racism while traveling through the South. The newly inaugurated Kennedy administration, embroiled in the Cold War and worried about the nuclear threat, did little to address domestic civil rights.
"It became clear that the civil rights leaders had to do something desperate, something dramatic to get Kennedy's attention. That was the idea behind the Freedom Rides—to dare the federal government to do what it was supposed to do, and see if their constitutional rights would be protected by the Kennedy administration," explains Arsenault.”
Posted by Map Monkey at 8:59 AM