The “Dangerous Epidemic” of Historic Preservation: A Force for Gentrification and Social Displacement? 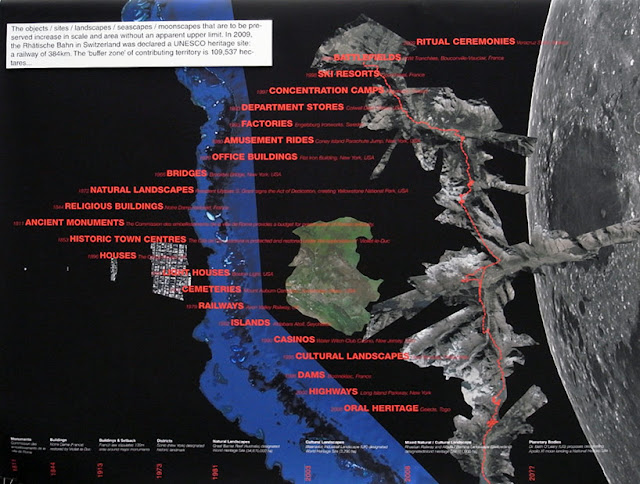 "The objects/sites/landscapes/seascapes/moonscapes that are to be preserved increase in scale and are without an apparent upper limit,” From the Rem Koolhaus exhibit “Cronocaos” at the New Museum.  Koolhaus claims that 12% of the earth’s surface is already landmarked by groups like Unesco.

Rem Koolhaus, the austere and some might say “maverick” Dutch architect, has done it again – acting as a provocateur and stirring up some much needed discussion about the objectives and results of historic preservation, especially in our cities.  Koolhaus has been known to come up with theories that are thought-provoking (an understatement!), starting with “Delirious New York,” his 1978 “Retroactive Manifesto for Manhattan,” which makes the case that New York is the venue for the terminal phase of Western civilization, the “Culture of Congestion.”  Now he gives us “Cronocaos.” (Apparently he has something against "H's.")
The following is excerpted from the May 23, 2011 New York Times article by Nicolai Ouroussoff:
“Has preservation become a dangerous epidemic? Is it destroying our cities?  That’s the conclusion you may come to after seeing “Cronocaos” at the New Museum.  Organized by Rem Koolhaas and Shohei Shigematsu, a partner in Mr. Koolhaas’s Office for Metropolitan Architecture, the show draws on ideas that have been floating around architectural circles for several years now — particularly the view among many academics that preservation movements around the world, working hand in hand with governments and developers, have become a force for gentrification and social displacement, driving out the poor to make room for wealthy homeowners and tourists.
Mr. Koolhaas’s vision is even more apocalyptic. A skilled provocateur, he paints a picture of an army of well-meaning but clueless preservationists who, in their zeal to protect the world’s architectural legacies, end up debasing them by creating tasteful scenery for docile consumers while airbrushing out the most difficult chapters of history.  The result, he argues, is a new form of historical amnesia, one that, perversely, only further alienates us from the past.
‘Cronocaos’ was first shown at the 2010 architecture biennale in Venice, the ultimate example of what can happen to an aged city when it is repackaged for tourists.  In New York the show is housed in a former restaurant-supply store next to the museum on the Bowery, in a neighborhood where the threats to urban diversity include culture as well as tourism.  The Bowery’s lively bar scene has been pushed out by galleries and boutiques. CBGB, the former rock club, is a John Varvatos store.”
Full article text at http://www.nytimes.com/2011/05/24/arts/design/cronocaos-by-rem-koolhaas-at-the-new-museum.html?_r=1&nl=todaysheadlines&emc=tha28
“Cronocaos” is on view through June 5 at the New Museum, 235 Bowery, at Prince Street, Lower East Side; (212) 219-1222, newmuseum.org. 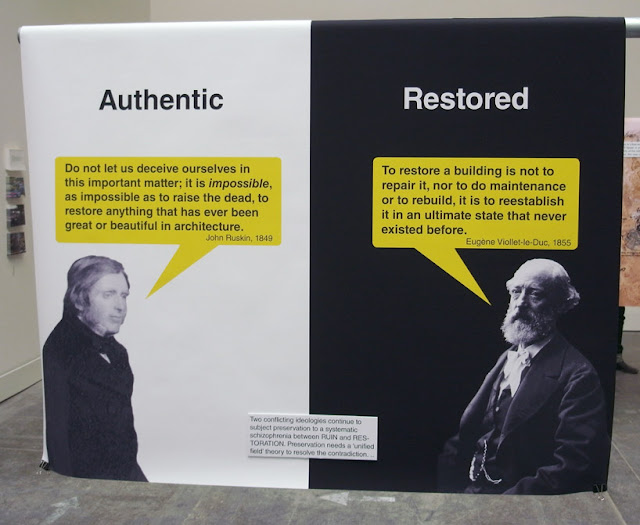 “Two conflicting ideologies continue to subject preservation to systematic schizophrenia between RUIN and RESTORATION.  Preservation needs a ‘unified field” theory to resolve the contradiction.”  From the “Cronocaos” exhibit.  Photo by designboom 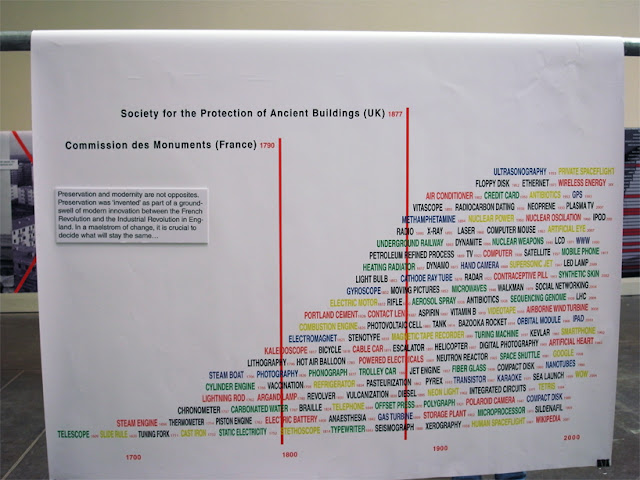 “Preservation and Modernity are not opposites.  Preservation was ‘invented’ as part of a ground-swell of modern innovation between the French Revolution and the Industrial Revolution in England, in a maelstrom of change.”  From the “Cronocaos” exhibit.  Photo by designboom
From the architect’s website (OMA) “Cronocaos,” at the Venice Biennale, 2010:
http://www.oma.eu/index.php?option=com_projects&view=project&id=1260&Itemid=10
Other (and some opposing) viewpoints on the exhibit and Koolhaus’ theories:
Preservation and its discontents:
http://www.walkingoffthebigapple.com/2011/05/preservation-and-its-discontents-word.html
rem koolhaas / OMA : CRONOCAOS preservation tour:
http://www.designboom.com/weblog/cat/9/view/14399/rem-koolhaas-oma-cronocaos-at-the-new-museum.html
Posted by Map Monkey at 9:49 AM