Public Transportation is NOT the answer? 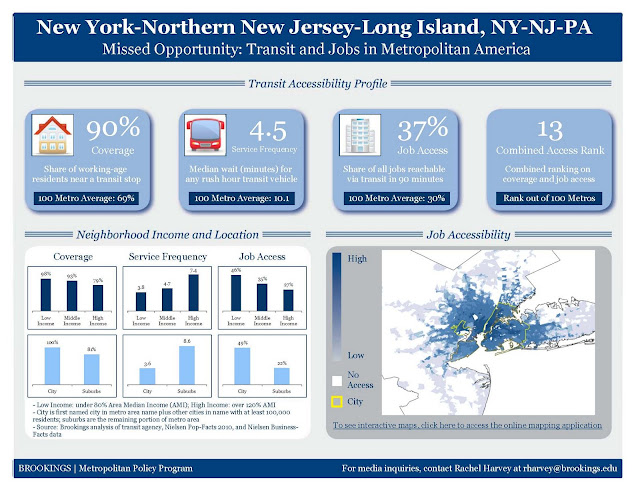 Map of Public Transit Access in the New York Metro Area, according to the report “Missed Opportunities: Transit and Jobs in Metropolitan America,” by the Brookings Institute.
In urban planning, environmental, public health, and other circles, public transportation is often held out as the answer to many of the world’s problems, especially in the U.S. (air pollution, respiratory and cardio-vascular disease, profligate use of non-renewable fossil fuels, obesity and lack of exercise, over dependence on foreign oil, traffic congestion, vehicular fatalities, stress, lack of  "community," and social isolation, etc., etc.).
Turning this conventional wisdom on its head, the Brookings Institution, (which is ranked as the number 1 “think tank” in the U.S. and therefore has far-reaching policy influence, and has variously been called “conservative,” “liberal,” and “centrist”!) recently conducted a research study with rather disappointing (and depressing) results for those of us who have always bought into the concept of mass transit = better world/environment.  Forget about whether or not the transit options exist, or could exist given the exigencies of today’s lack of public resources.  Even if they DID exist, according to this study, it wouldn’t help most Americans to get from home to their places of employment within a 45 minute commute time.  The average American commute today (mainly by private vehicle) is 21 minutes, so a 45 minute commute is a considerable increase in time on the road (or railroad).  But even allowing for the 45 minutes threshold, most transit systems in major metro regions would not be able to get you there in that timeframe, making it extremely unlikely that people would opt for mass transit over their private automobiles.  Somewhat surprisingly, the report found that 15 of the 20 metro areas that rank highest on a combined score of transit coverage and job access are in the West.  (Really??? Salt Lake City, Tucson, and Las Vegas are among the top-ranking?  Sounds a bit dubious to me!)
“The report is unusual in not evaluating the performance of metropolitan transit systems, but rather, ‘what they are capable of.’  Moreover, the Brookings access indicators go well beyond analyses that presume having a bus or rail stop nearby is enough, missing the point the availability of transit does not mean that it can take you where you need to go in a reasonable period of time.” (Wendell Cox, of newgeography)
This, of course, is not to blame public transit systems for the length of time required to get from point “A” to point “B.”  Rather, it is due to the increasing dispersion of jobs away from the downtown areas of the cities, which generally are (or could be) well-served by transit options, as well as the general sprawl of residential suburbs to areas outside of easy (and direct) public transit commuting options.
According to their report, only 7% of the jobs in the U.S. would be accessible within 45 minutes by public transportation.  I need to see their methods on how they figured out the issue of access and how they calculated the commute times.  But if the methods and their results are valid, then we have a bigger problem on our hands than just finding the money to throw at public transportation financing.  Is it too late to turn the tide on the faulty land use planning policies of the past 60 years (since the post-WWII period)?  Can we reverse the trend of massive decentralization and dispersion of both homes and jobs? Can we stop the madness of land consumption and development of our agricultural and "natural" areas near our cities? Can we create policies that will encourage jobs to remain in the areas well-provisioned by easy public transit? Is it possible to refocus American priorities away from ¼ acre lots in the suburbs?  Can cities once again be desirable places to live for middle class families, and not just be warehouses for the very poor and playgrounds for the wealthy, the tourists, and the young urban hipsters?
You can read the full article on the website “newgeography” at:
http://www.newgeography.com/content/002251-transit-the-4-percent-solution?utm_source=feedburner&utm_medium=feed&utm_campaign=Feed%3A+Newgeography+%28Newgeography.com+-+Economic%2C+demographic%2C+and+political+commentary+about+places%29
Really good interactive map of about 100 metro areas’ access to transit, (you can zoom to specific metro areas, filter by income level, and look at transit coverage, service frequency, job access, and travel time, etc.)
http://www.brookings.edu/metro/jobs_and_transit/Map.aspx
The Brookings report “Missed Opportunities: Transit and Jobs in Metropolitan America,” can be accessed at: http://www.brookings.edu/reports/2011/0512_jobs_and_transit.aspx and full report pdf at: http://www.brookings.edu/~/media/Files/Programs/Metro/jobs_transit/0512_jobs_transit.pdf
Explaining the findings of the Brookings Report (interesting rebuttal of some of the criticisms of the study):
http://www.brookings.edu/opinions/2011/0523_transit_berube_puentes.aspx 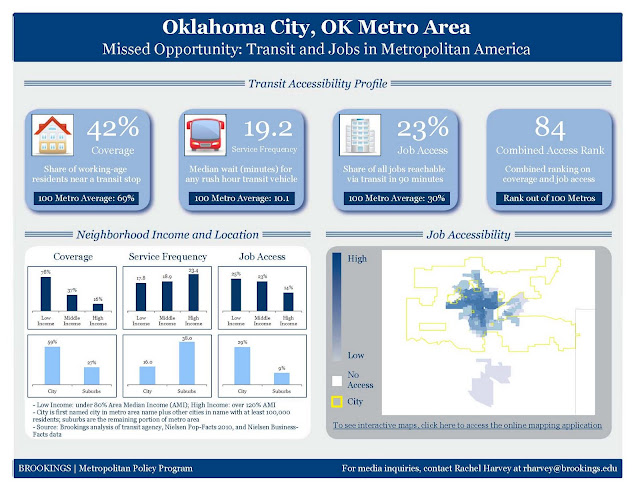 Another example of their maps and stats – this one for Oklahoma City, OK. 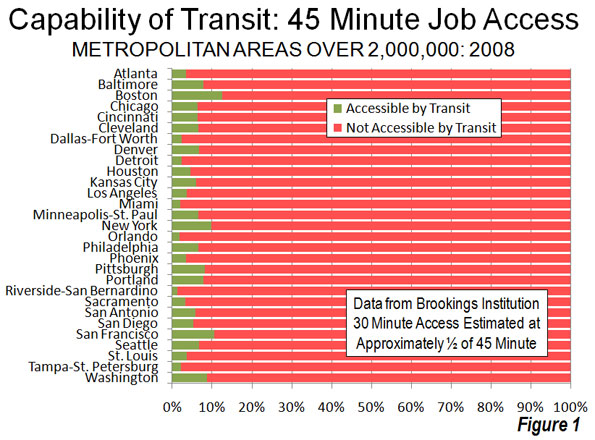