Tuva or Bust! The Last Journey of a Genius 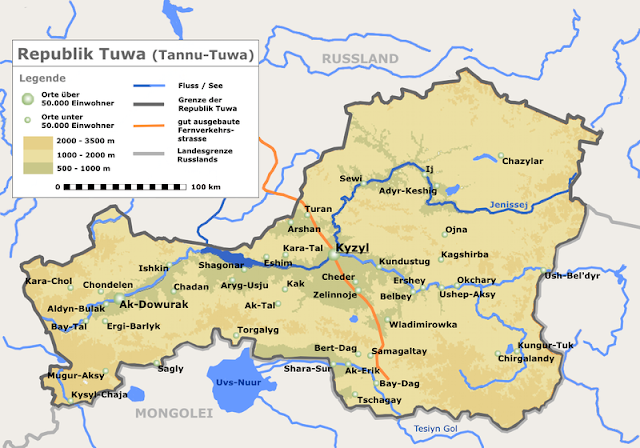 “I'm an explorer, okay - I get curious about everything and I want to investigate all kinds of stuff,” Richard Feynman, Nobel Prize winning physicist, honorary geographer, and Tuva devotee.  (Map Source: Karte von Tannu-Tuwa, einem Teil Russlands Lizenz: Das Bild wurde von Benutzer:Roger_Zenner gezeichnet und wurde unter der CC-by-sa veröffentlicht.)
Richard Feynman, who described himself as a bongo-player and physicist, (note the order/emphasis of his vocations!) was an extraordinary individual.  Although not technically a geographer, he was a geographer in all but name.  He was one of the leading theoretical physicists in the world, but was nevertheless a very unassuming, down-to-earth person. He had deep misgivings about having won and accepted the Noble Prize in Physics, due to his suspicion that all honors were bogus, eaters of precious time, while also preventing one from carrying on with life as before.  In other words, awards and honors bestowed were an obligation that interfered with being able to focus on what one is truly interested in. 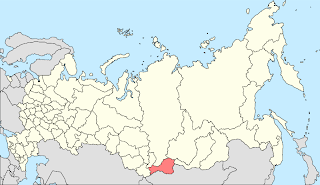 I recently read a book about him called “Tuva or Bust! Richard Feynman’s Last Journey,” by his very good friend, Ralph Leighton (WW Norton, 2000).  I picked up the book in Metsker's Map Store when I was in Seattle last month, and it was quite a good read.  It is a funny and poignant look at Feynman’s obsession with trying to get to travel to a little-known country in central Asia called Tuva.  If you’ve never heard of the country of Tuva, don’t worry, it doesn’t really exist as a country anymore. 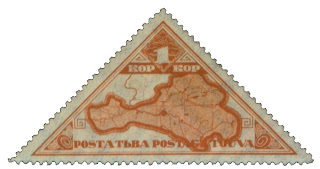 Tannu-Tuva is a Republic within the Federation of Russian States, and before that was an Autonomous Oblast in the USSR, but for one brief period in the 1920s-1930s, it was an independent nation, and apparently issued some of the most beautiful and unusual postage stamps in the world, which is how Feynman became interested in the place when he was a boy.  The book details the ins and outs of his decades-long struggle to go there - the Soviet Union kept Tuva completely closed to the outside world for over 50 years, hence the almost insurmountable difficulties in arranging a trip there in the 1970's-1980's, and it is still extremely remote and fairly inaccessible. Its capital city's airport has "occasional flights."  It is also the poorest state in Russia, and its people have the lowest life expectancy and highest infant mortality. 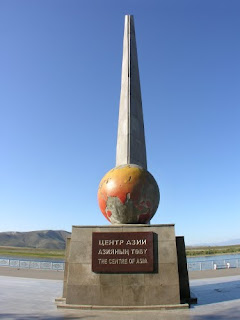 Tannu-Tuva contains the geographical center of Asia, (see photo of geographical monument, at left) and its people have traditionally been mainly horse-centric nomads, related in some ways to the Mongolians, and speak a Siberian Turkic-derived language.  Tuvans typically are Tibetan Buddhists, Eastern Orthodox Christians, or animists/Shamanists (very often in combination).  They practice a unique musical vocal form connected with animism, called "throat-singing," which produces several harmonic notes at once from the same person.  Their music heritage is an important part of their national and ethnic identity.  Listen to a podcast about throat signing at http://onpoint.wbur.org/2006/01/13/the-art-of-tuva-throat-singing
Feynman's obsession with Tuva started off as a lark, to visit a place whose capital was spelled “KYZYL.”  You can hear the whole story if you watch the video “The Quest For Tannu Tuva: Richard Feynman - The Last Journey of a Genius (1988)” at http://www.scholarspot.com/video/148/4414/Richard-Feynman-The-Last-Journey-Of-A-Genius-1988-   The video is about 54 minutes long, but is very interesting, and gives some excellent insights into Feynman, Tuva, throat-singing, and what it means to be passionate about something “just for fun.”  In the video, Feynman talks about “the fun of having an adventure,” and doing things for the fun of it.  Mind you, this interview session was recorded when Feynman knew he was dying, and in fact he passed away two weeks later. You also get to hear Feynman’s unmistakable Queens accent, which is a real treat.  Even though he lived in California for decades, he never lost the Queens accent.
The account in the book of his elaborate and lengthy machinations to get to Tuva also makes us appreciate how difficult, time-consuming, and patience-testing research and communication were in the days before the Internet, Google search engines, and e-mail.  He had stamina and perseverance! 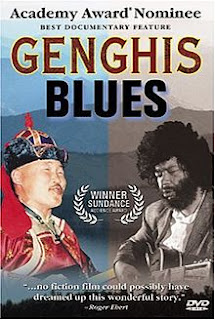 If you are intrigued by the throat-singing, check out a film called Genghis Blues, which describes a blind American blues musician who one night heard throat-singing on his short-wave radio, taught himself the technique, and competed in a throat-singing contest in Tuva.  The documentary film won an award at the Sundance Film Festival and was nominated for an Academy Award.   http://www.genghisblues.com/
For you philatelists, there is a website devoted to stamps of Tuva at http://www.si-usa.com/tuva/
Buga-shadara, a board game from Tuva at http://hem.passagen.se/melki9/buga.htm
Friends of Tuva website, founded by Ralph Leighton and Richard Feynman at http://www.fotuva.org/
A Shaman’s Prayer (an excellent short film produced for “Dateline,” program on Australian network SBS TV) can be viewed at http://www.sbs.com.au/dateline/story/watch/id/600826/n/Shamanic-Revival
A quote from a Tuvan Shaman: “Nature can survive without humans, but humans cannot survive without nature.”  Something we should remember with all our talk about “saving the earth.” 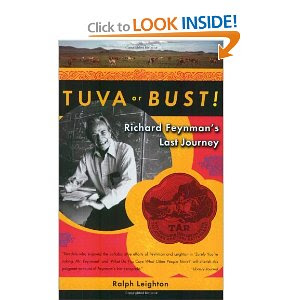 "Richard Feynman, brilliant physicist and inspirational teacher, wasn't much for coats and ties. He lived a life that the adjective "bohemian" doesn't begin to cover, scripting percussion scores for avant-garde ballet troupes, musing over life's imponderables, and delighting and annoying his many friends with odd-duck questions--all the while teaching generations of students at CalTech.
Always adventurous, Feynman was also a careful planner, recounts his friend and fellow drummer Ralph Leighton in this affectionate memoir. When a chance remark happened to dislodge a long-dormant memory of a faraway Siberian land called Tannu-Tuva, Feynman and Leighton set about scheming to get there--a program that included learning the little-described Tuvan language, picking up the rudiments of throat singing, and reading the scattered, hard-to-find literature concerning a place that, in Feynman's fond view, was as close to paradise as the earth contained. It also involved corresponding with scholars in what was still the Soviet Union and wrangling with bureaucrats to secure the necessary papers--all for the sake of seeing a country that had to be interesting, Feynman insisted, just because its capital, Kyzyl, had such an odd spelling.
These picaresque armchair adventures make up the bulk of Tuva or Bust, an unconventional mix of travelogue and scientific biography that's a pleasure to read at every turn. The book yields a memorable picture of Richard Feynman--who did not live to see Tuva, but whose memory is honored there today, thanks to Leighton's refusal to abandon their shared dream." --Gregory McNamee
Posted by Map Monkey at 11:48 AM