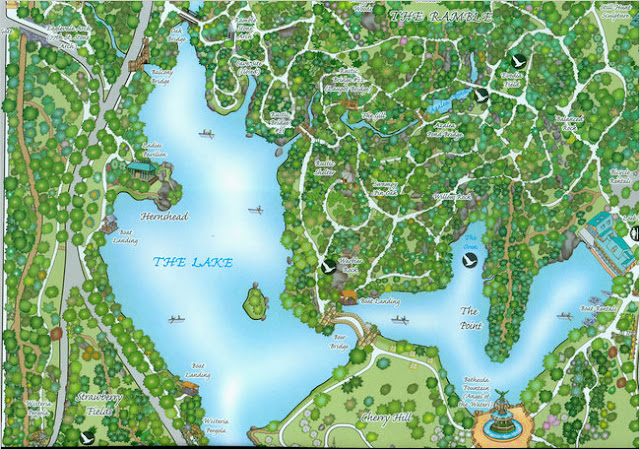 A detail from the 36-by-26-inch folding map by Ken Chaya and Edward Sibley Barnard depicts the trees in the Ramble and its environs.  Their map includes 174 species and represents about 85 percent of the vegetation on the park’s 843 acres.

The legend in the map enumerates trees of 174 species and shows each one's color and leaf.  Map by Ken Chaya and Edward S. Barnard
Two men who are tree-enthusiasts and graphic designers are mapping every tree in NYC’s Central Park.  So far they have mapped 19,933 trees, out of the park’s approximately 23,000.  They are doing this independently from the city’s Parks Dept., and at their own expense.  They estimate they have spent over $40,000 of their own money on the project, and 2 ½ years of their lives.  These two guys have not only inventoried the trees, but they have made a beautiful, water-proof, poster-sized folding map, for sale in the Central Park Dairy, an historic structure from the time the park was built, where milk used to be distributed to poor children and now is a gift shop, exhibit hall, and information center.  (As an interesting side note, one of the reasons that milk was distributed from the Dairy as a public service was that in those pre-regulation times, most of the milk available for sale in NYC was contaminated because the cows were being fed left-over brewery mash to cut costs, instead of hay.  The Dairy milk was fresh and un-tainted.) 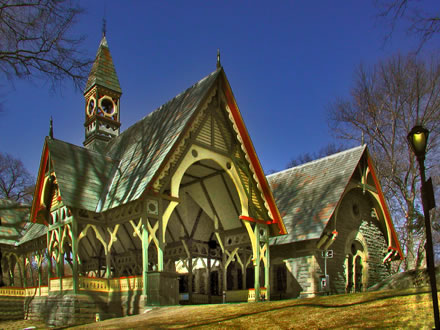 Central Park Dairy, 1870, designed by Calvert Vaux in the Victorian Gothic style. One of my favorite buildings in NYC!

Chay and Barnard’s map is called “Central Park Entire: The Definitive Illustrated Folding Map,” and is also available for sale as a folding map or a poster on their website http://centralparknature.com/  The website has some great information about the Park and the trees, plus a video about how the mapping was done.  According to the two tree mappers, there are only about 150 of the original trees remaining that were planted in the 1860’s to fulfill the Olmsted/Vauxhall design for the park. But when you think about it, that was about 150 years ago! The map also includes very nice depictions of every architectural and other built elements in the park, as well as the location of restrooms - very helpful info!  (Thanks, Amy Trexler, for sending me this link originally, way back in February, 2011!)
The Central Park Conservancy has done its own tree censuses and even has an internal GPS system that identifies individual trees in the park, but has not produced a publicly-available map.
For those of you who are New York Times digital subscribers or who haven’t used up your 20 free articles a month, here is the story from today’s Times.
http://www.nytimes.com/2011/05/31/nyregion/2-enthusiasts-compose-map-of-central-park-trees.html?nl=todaysheadlines&emc=tha29
Posted by Map Monkey at 10:09 AM