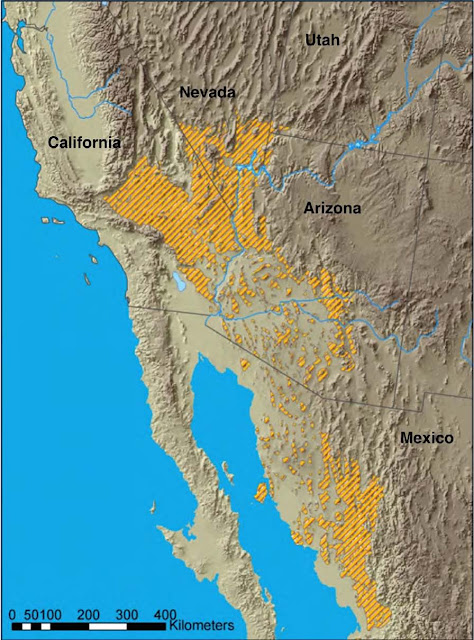 Map showing the distribution of the endangered desert tortoise (Gopherus agassizii) in western North America (adapted from Germano and others, 1994), from the USGS publication “Modeling Habitat of the Desert Tortoise in the Mojave and Parts of the Sonoran Deserts of California, Nevada, Utah, and Arizona,” Open-File Report 2009-1102 http://pubs.usgs.gov/of/2009/1102/pdf/ofr20091102.pdf
Now that summer vacation time is almost upon us, and for those luckiest amongst us who might be able to break away and take a road trip to one of the U.S. National Parks or other public lands, there is a lot of information out there on where to see rare and endangered species in the wild.  The New York Times just published an article about this in their Travel section at http://travel.nytimes.com/2011/05/15/travel/endangered-species-travel-guide.html?nl=todaysheadline

Parks in the Pacific West and the Southeast Regions have the greatest number of threatened and endangered species.  This table displays parks with the most listed species.  Not only do these areas of the country have great biologic diversity, but many of these areas have been significantly affected by invasive, non-native species and human development.   Source: National Parks Service
An interesting sidebar to the article was a listing of many websites (mainly Federal, with some non-profit conservation organizations) that have compiled databases of endangered species, some of which are suitable for GISc mapping and analysis.  For those of you who are always looking for accurate species data to map and analyze, check out some of these sources.
And, on May 20th, the U.S. Fish and Wildlife Service will observe Endangered Species Day to recognize conservation efforts underway across the nation aimed at helping America’s threatened and endangered species.  As part of the celebration, the Service and the Endangered Species Coalition are cosponsoring events around the country to focus public support on rare and imperiled species.  http://www.fws.gov/endangered/about/ep_10_2011.html
http://www.nature.nps.gov/biology/endangeredspecies/
National Parks Services endangered species database
http://www.iucnredlist.org/
International Union for the Conservation of Nature
The document contains several sections, providing guidance on how to search the web site, how to navigate through the species fact sheets, how to save searches and export data from the site, and where to find and download GIS data for amphibians and mammals. 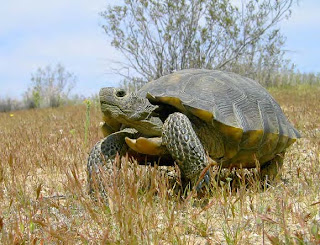 As many of you know, these creatures are very near and dear to my heart, and so I am including some more info on the Desert Tortoise as an example of some of the data that is available.
Mojave Desert Tortoise found in Piute Valley in Clark County, Nevada (Kenneth E. Nussear, 2005) 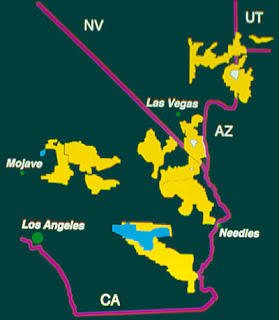 Desert Tortoise Critical Habitat  Gopherus agassizii
The United States Fish and Wildlife Service designated habitat critical to the survival and recovery of the Mojave populations of the desert tortoise in 1994. Critical Habitat Units (yellow) were designated in California, Nevada, Utah and in Arizona north and west of the Grand Canyon. The blue area in the west is the Desert Tortoise Natural Area and blue area in the south is Joshua Tree National Park.   http://www.tortoise.org/conservation/criticalhabitat.html 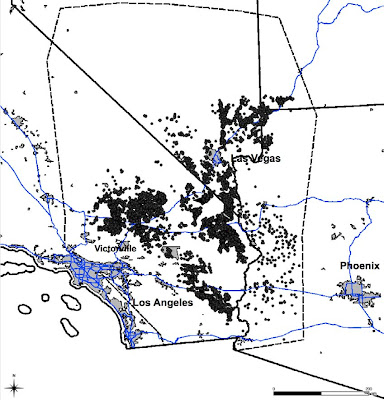 Distribution of desert tortoise (Gopherus agassizii) presence observations at sites in the Mojave Desert and parts of the Sonoran Desert of California, Nevada, Utah, and Arizona. Solid circles indicate records of one or more observations of live or dead tortoises. The dashed line indicates the study area boundary for the habitat model. Major highways are indicated by blue lines, and urban areas are indicated by gray shaded areas.
From the USGS publication “Modeling Habitat of the Desert Tortoise in the Mojave and Parts of the Sonoran Deserts of California, Nevada, Utah, and Arizona,” Open-File Report 2009-1102 http://pubs.usgs.gov/of/2009/1102/pdf/ofr20091102.pdf
This, by the way, is an excellent document which fully describes their modeling methodology and results. Very useful for researchers contemplating similar biogeographical analyses. 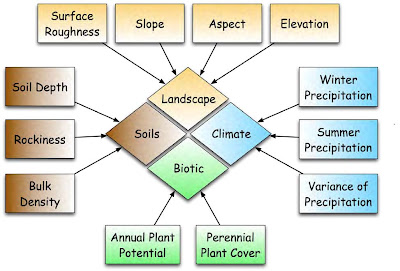 Array of variables used to predict desert tortoise habitat.  Environmental variables were generally related to four categories of influence on the landscape and were hypothesized to influence tortoise ecology/habitat potential through a variety of mechanisms. 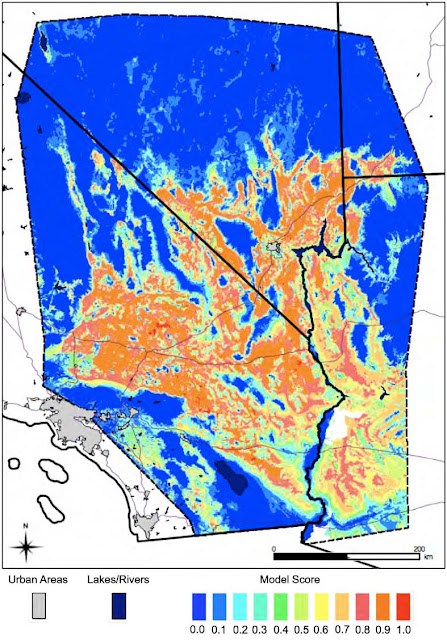 Spatial representation of the predicted habitat potential index values for desert tortoise (Gopherus agassizii) in the Mojave and parts of the Sonoran Deserts of Arizona, Nevada, Utah, and Arizona. White patches within the study area indicate areas where no environmental data were available for one or more layers. The Maxent model output used to develop this figure available as an ESRI ASCII GRID file at http://pubs.usgs.gov/of/2009/1102/
The full report, data, and model can be downloaded from http://pubs.usgs.gov/of/2009/1102/