“The animation shows the forecast positions of volcanic ash (total column in units of g/m2) from 20.00 GMT on 21 May to 06.00 on 27 May from the Grímsvötn volcanic eruption. The emission source varies in time and assumes a uniform height profile up to the reported plume heights measured by radar. It is also constrained by total fine ash mass determined by satellite.”  From: The European Space Agency at http://www.esa.int/esaCP/SEM3WUMSNNG_index_1.html
The website has other animations that are interesting, also. 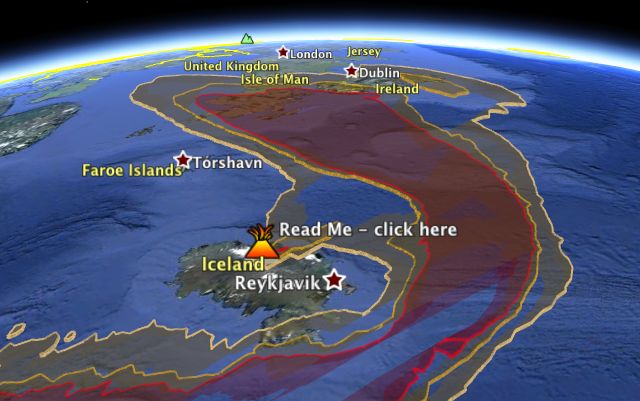 “With erupting Icelandic volcanoes seemingly becoming an annual event, Adam Burt has overhauled his ash-cloud visualization tool for Google Earth, which he first made for Eyjafjallajökull’s eruption in June of 2010. Based on data gleaned every six hours from theUK Met office, the resulting network link visualizes ash density from Grimsvötn at different times and airspace heights, and can be played as an animation. Here it is — open in Google Earth.”  The Google Earth visualization gives you a good perspective on the extent and direction of the ash plume - we typically think in terms of a 2-D map, with the plume going east towards Europe or west towards North America, but it is also going north over the North Pole to affect Asia, as well.
From: Ogle Earth at  http://ogleearth.com/2011/05/grimsvotns-ash-cloud-visualized-in-google-earth/
Info from NASA’s Earth Observatory: http://earthobservatory.nasa.gov/IOTD/view.php?id=50684&src=eorss-iotd
Posted by Map Monkey at 8:20 AM