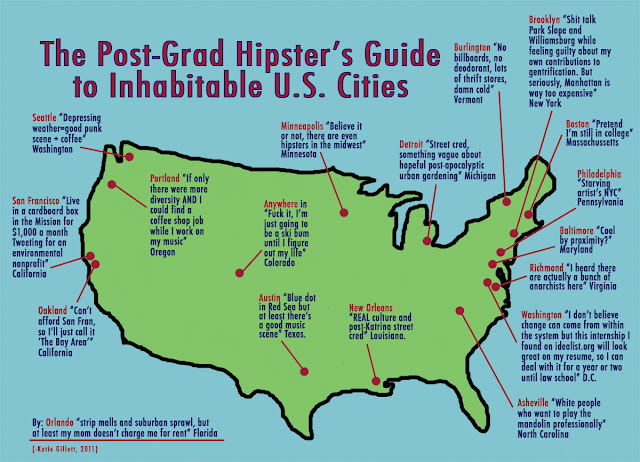 The Post-Grad’s Hipsters’ Guide to Inhabitable U.S. Cities, for all of you recent graduates or about-to-be-graduates! Map by Cartographer Katie Gillett from: http://therumpus.net/2011/05/post-grad-hipsters-guide-to-inhabitable-u-s-cities/ 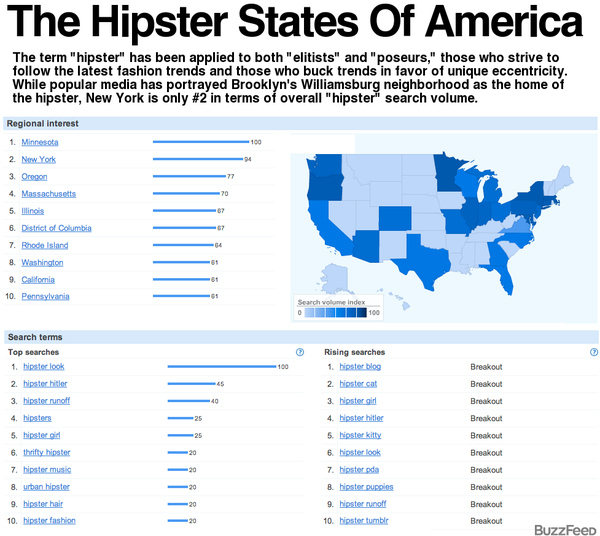 This map looks at normalized Google Search volumes by State for ‘hipster.’  Contrary to popular perception, Minnesota comes out as the hippest, New York only at #2.  Although Minnesota has less than 1/3rd the population of New York state, it leads the nation in searches for the term ‘hipster.’   Map source: http://www.buzzfeed.com/chrismenning/the-most-hipster-state-in-the-us
“Looking for an abundance of bike lanes, farmers' markets and bearded dudes? Then head to Minnesota, the most hipster-iffic state in the U.S., according to Buzzfeed's super-official map of American hipsterdom.  The results are actually based on search engine statistics for the word ‘hipster,’ which means that while Minnesotans are readily researching the loaded term, they're probably also most likely to deny being one. It also explains how they beat out New York — it's assumed Brooklynites already know the meaning of the word, or you know, can't be bothered to read about a far-too-frequently analyzed subculture.
In other words, take these findings with a shaker of salt.  After all, Minnesota is also home to the country's largest shopping mall, not the largest second-hand, vintage clothing store. And as for the all the guys with bushy sideburns, plaid shirts and cans of PBR — I'm pretty sure they're just actual lumberjacks.  Curious to see how your state fared? Check out the map above.”  From http://www.nerve.com/news/current-events/the-most-hipster-state-in-the-us-isnt-new-york:
Some comments in rebuttal to the designation of Minnesota as the #1 Hipster location:
·         Wait, if it's based on amount of search of the term "hipster" doesn't that mean MN doesn't understand what hipsters are and have to do research? I've been to most of the places on that list and the coasts are way more hipster than MN (which is my home state). Minnesota still thinks food trucks are cool. Also, flared jeans are still popular here.
·         Hold on -- you're saying that Minnesota is most hipster-ish based solely on how often people search for the word "hipster"?  That makes absolutely no sense.  By that logic, 13-year-old boys must have the world's biggest boobs.
·         Easy on the Brooklyn bashing.  It is the way it is because it's full of Midwestern transplants. They aren't emulating Minnesotans.  They are more than likely Minnesotans huddled together in an ironic enclave they created in NY... 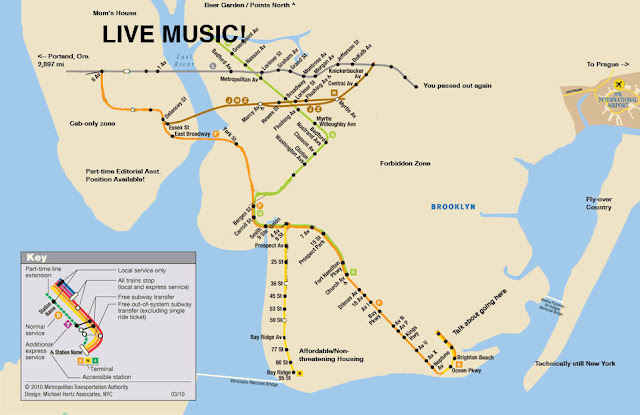 The Fake MTA has released what they are calling a “Hipster-friendly subway map.”  Do hipsters really talk about going to Brighton Beach that much? From: The Gothamist at http://gothamist.com/2010/05/21/map_hipster_friendly_mta.php 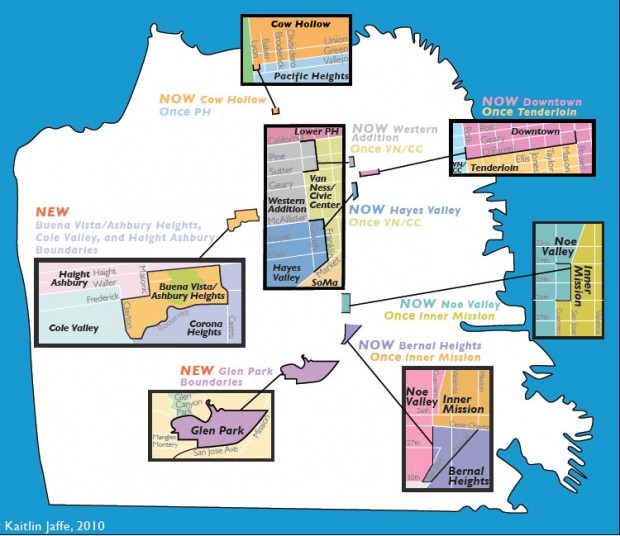 There has been lots of push-back on this map, what with the real estate industry’s unofficial re-naming of neighborhoods in SF, extension of neighborhood boundaries to augment gentrification efforts and increase asking prices, virtual red-lining of black communities (by segregating them outside the boundaries of the hipster neighborhoods and calling them by their original names, while the white people’s (hipsters') areas have been re-named something else), and in general escalating the already crazy housing prices in the city.

As an end note to all of this, it should be mentioned that no self-respecting hipster would want to be called a hipster. Of course not! That wouldn’t be ironic enough! Anyway, in many circles they are also known by the term “douchebag-slackers,” which they don’t like, either, for some odd reason. Oh, well! What do I know! I am probably an aging hipster, myself, and have been called far worse in my day!