Spring Tornadoes in the Southern US 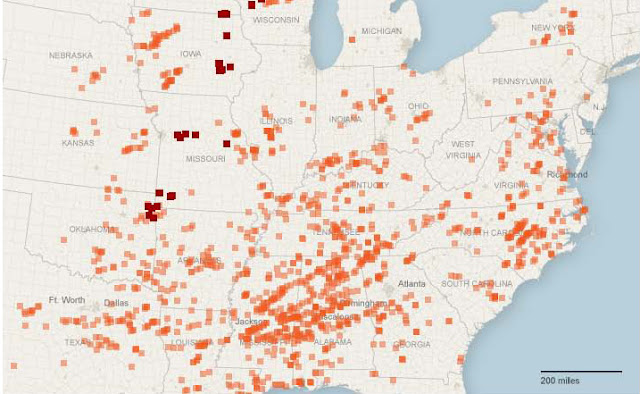 Over the last three months, nearly 1,400 tornadoes have been reported, most of them in the southeastern U.S.  The map shows the location reports day-by-day. Over 120 people were killed in Joplin, MO after a tornado swept through the town on Sunday night, May 22nd.   See the animated map at:
http://www.nytimes.com/interactive/2011/05/23/us/0523-tornado-tracker.html?ref=us
Thanks, Kristen, for sending me the link!

Also, see interactive aerial photos of Joplin, MO, before and after the tornado. It's pretty dramatic - The Greenbriar Nursing Home, for instance, is just totally gone in the "after" photos. Photos by M.J. Harden / GeoEye, at:
http://www.nytimes.com/interactive/2011/05/25/us/joplin-aerial.html?nl=todaysheadlines&emc=thab1

Another good New York Times interactive feature is the map series "The Deadliest Years," which combines a point map of tornado touchdown sites AND a proportional symbol map showing numbers of associated deaths.  With nearly 500 tornado-related deaths so far, 2011 has already shaped up to be the deadliest year since 1953, when there were 519 deaths. What is pretty surprising as you play the time series sequence, is that in almost every year there are at least a few dozen tornado-related deaths, and in some years, hundreds of deaths.
http://www.nytimes.com/interactive/2011/04/28/us/tornado-deaths.html?ref=us
Posted by Map Monkey at 8:49 AM