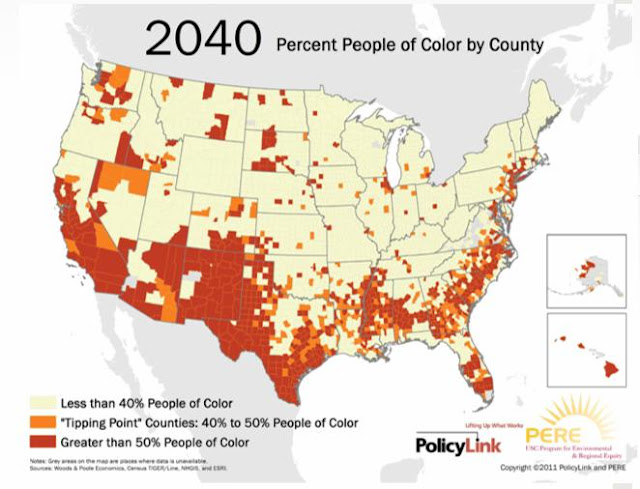 U.S. Counties projected to have more than 50% minority population in 2040.
Source: Policy Link.org
Policy Link has put out an animated time series map of U.S. counties showing minority population percentages from 1990, 2000, 2010, and their projections of minority population percentages for 2020, 2030, and 2040.  This was just published on-line a few days ago, and has become something of a flash point in the media, as well as amongst entities like the Tea Party, as you can imagine.
The upshot of their analysis is that by 2042, the nation will be a majority of people of color.  In other words, a majority of those who we refer to today as “minorities.”  Although these populations will not be the majority in all parts of the country, in many counties they will constitute close to 100% of the population.  It would be nice to see these maps alongside some pop density maps, so we could compare high percentages with high absolute numbers of population. It is interesting to contemplate the implications of this geographic distribution of people of color, who will predominate in the rural south and southwest, and in the most highly urbanized areas throughout the nation.
This is what the Policy Link website says about their map series:
“PolicyLink has released ‘The Map of America’s Tomorrow,’ a new interactive time-lapse map showing – for the first time – the growth of people of color in America from 1990 through 2040.  Census projections have long shown that people of color will soon be our nation's majority.  And yet there's been no visualization of what this future will actually look like – until now.
In less than 24 hours, the map has received over 100,000 views (and counting) and has been viewed in 135 countries.  Harlem Children Zone's Geoff Canada used it as the centerpiece for a presentation he gave on ‘How to End Poverty’ at the Google Zeitgeist Festival in London this week.  The Daily Beast's Andrew Sullivan has also joined in, describing the video yesterday as ‘The Browning of America.’
“‘This map makes crystal clear just how dramatically the face of America is changing – and how quickly,’ said Angela Glover Blackwell, Founder & CEO of PolicyLink. ‘Already, nearly half of all young people are of color, and by 2042, people of color will become our nation's majority.  Clearly, this snapshot of our future has struck a chord, leaving no doubt that we must invest in and start building the foundation of tomorrow's America today. Let's start now.’
This map is the first installment of ‘America's Tomorrow: Equity in a Changing Nation’ – a new multimedia series exploring America's changing demographics and the leaders who are making a difference.”
You can see the animated time-series map, 1990-2040, at:
http://www.policylink.org/site/c.lkIXLbMNJrE/b.7086035/k.67C/America8217s_Tomorrow.htm
The methodology used for the projections are given in the Technical Summary by Woods and Poole, and summarized in part here:
“The methods used by Woods & Poole to generate the county projections proceed in four stages.  First, forecasts to 2040 of total United States personal income, earnings by industry, employment by industry, population, inflation, and other variables are made. In the 2011 Woods & Poole model the U.S. forecast included an estimate of the 2008-09 recession using preliminary employment data for 2009 and 2010 from the Bureau of Labor Statistics.
Second, the country is divided into 179 Economic Areas (EAs) as defined by the U.S. Department of Commerce, Bureau of Economic Analysis (BEA).  The EAs are aggregates of contiguous counties that attempt to measure cohesive economic regions in the United States (a list of all EAs and their component counties can be found in Appendix 6 following this chapter); in the 2011 Woods & Poole model, EA definitions released by the BEA in May 2007 are used. For each EA, a projection is made for employment, using an “export-base” approach; in some cases, the employment projections are adjusted to reflect the results of individual EA models or exogenous information about the EA economy.  The employment projection for each EA is then used to estimate earnings in each EA.  The employment and earnings projections then become the principal explanatory variables used to estimate population and number of households in each EA.
The third stage is to project population by age, sex, and race for each EA on the basis of net migration rates projected from employment opportunities.
For stages two and three, the U.S. projection is the control total for the EA projections. The fourth stage replicates stages two and three except that it is performed at the county level, using the EAs as the control total for the county projections."
Technical description of methodology at:
http://www.woodsandpoole.com/pdfs/TECH11.pdf
Also, for those interested in health equity issues, check out the Policy Link Center for Health and Place at:
http://www.policylink.org/site/c.lkIXLbMNJrE/b.5136633/k.F267/PolicyLink_Center_for_Health_and_Place.htm
And also a publication called “Why Place and Race Matters,” at
http://www.policylink.org/atf/cf/%7B97c6d565-bb43-406d-a6d5-eca3bbf35af0%7D/WPRM%20FULL%20REPORT%20(LORES).PDF
Posted by Map Monkey at 10:34 AM