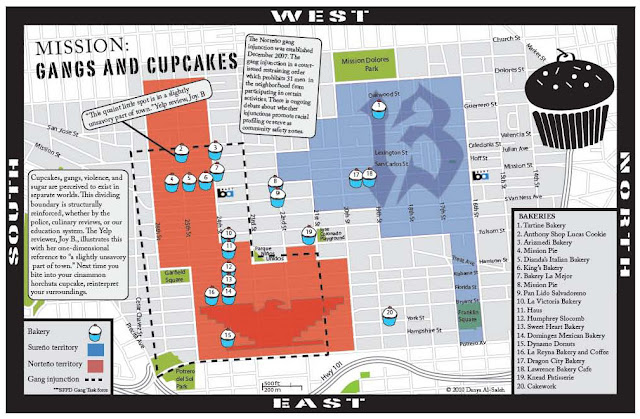 Map showing the spatial coincidence of cupcake shops and gang territories in San Francisco, CA.
I think the map (and the analysis) is somewhat tongue-in-cheek, but I very much like the idea of viewing the spread of the cupcake shops as a metric of gentrification, although one of the referenced web links brought up the valid point that this metric would change over time, as fashions changed.  In the 1990's, it might have been the proliferation of Starbucks coffee houses that indicated gentrifying neighborhoods, and in the 1980's, perhaps gourmet yoghurt shops moving into an area, etc.  I don’t know about other cities, but in NYC where I live, right now it would be the new doggie day care centers that are springing up in many places that appear to designate a change to a more affluent, up-and-coming hipster-ish nabe.
Obviously, the map above is not trying to show that the advent of cupcake shops in a neighborhood is connected in any causal way to crime rates, (or vice versa) but it’s an indicator of the gentrification process in areas where perhaps the original occupants and their activities are not being modified as quickly as expected by the gentrifiers, as evidenced by the continued gang-related violence at the doorsteps of the aforementioned cupcake shops.  The people interviewed in the article, the local hipsters and the baristas, at least, all seem to have the attitude “everything is fine, the violence has nothing to do with ‘us,’ and just keep the blood out of my latte.”
A couple of years ago, an undergraduate student in the GISc program (Aris Polanco) did his capstone GISc research project on gang injunctions and crime in San Francisco - he was trying to see if areas where the police had instituted injunctions were the actual crime hotspots, or whether the police were just setting the boundaries of the injunction areas to control the gang activities (which are not necessarily all crime-related) and minimize the presence of the gangs, in order to foster gentrification.  Excerpting from Polanco’s project report: “The goal [of the research] is to determine if Gang Injunctions are implemented in the neighborhoods with the highest crime rates or in neighborhoods that are rapidly gentrifying... A civil gang injunction is a spatial crime control mechanism that prohibits alleged gang members and their associates from doing certain things (usually association with one another, loitering, and other activities, many of which are already crimes) in specific geographic areas.  Because of these restrictions civil rights groups have challenged the constitutionality of these measures and claim that they violate many civil liberties (American Civil Liberties Union of Northern California, ACLUNC).  Recently the City of San Francisco has implemented gang injunctions (GI) in three neighborhoods, against five gangs as a means to reduce crime.  It has been hypothesized that gang injunctions are implemented to prevent the movement and interaction of poor minorities within areas that contain an economic interest from developers (Stewart 1998). Alejandro Alonso, a geography Ph.D. candidate at the University of Southern California, who studied gang injunctions in Los Angeles County, argues that, ‘If you map out every gang injunction in LA County, you will observe a pattern of 'privileged adjacency'... In Los Angeles, every gang injunction seemed to target a gang that was located in an area that has more affluent concerns....’ (Barajas 2009).”
Polanco found that, indeed, the areas where the gang injunctions had been placed coincided spatially with the areas that had been officially set up by the city planners for redevelopment, and were not necessarily the crime hot spots – although they were also not the areas with low crime rates, either.  “Although it is difficult to precisely relate the implementation of gang injunctions to gentrification, this research supports the notion that gang injunctions are implemented in areas undergoing gentrification, rather than in areas that only have a serious crime problem,” (Polanco, 2009).  And therefore making these places safer for cupcake shops. 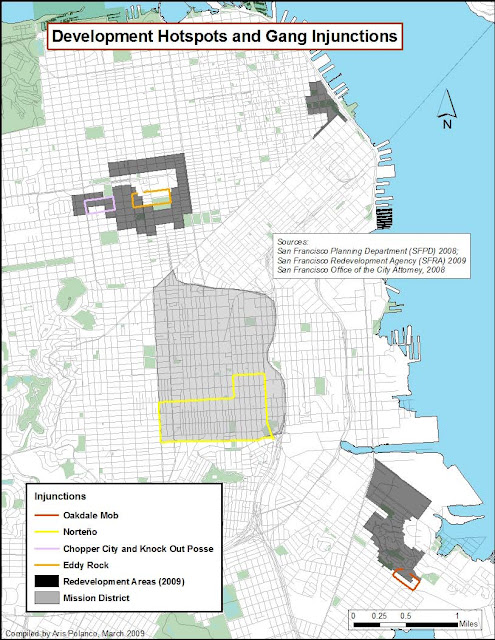 All gang injunctions fall totally or partially within the boundaries of development areas.
Map by Aris Polanco


Thanks for sending, Lesley Kunikis!  This is quite interesting.
http://www.ediblegeography.com/mapping-gangs-and-cupcakes/
Mapping gangs and cupcakes
http://missionlocal.org/2011/03/gangs-and-cupcakes/
The original account in the “Mission Local” blog
http://www.ediblegeography.com/cupcakegentrification/
Cupcakes as a metric of gentrification
Some references from Polanco’s paper, for those interested in reading more about gang injunctions:
Frank P Barajas, 2009.  An Invading Army: A Civil Gang Injunction in A Southern California Chicana/o Community.  Latino Studies 5:4, 393-417
Grogger, Jeffrey, 2002.  The Effects of Civil Gang Injunctions on Reported Violent Crime: Evidence from Los Angeles County.  Journal of Law and Economics 45: 69–90.
Maxson, Cheryl L., Hennigan, Karen M., Sloane, David C., 2005.  It's Getting Crazy Out There: Can a Civil Gang Injunction Change a Community? Criminology and Public Policy 4:3, 577-605.
Polanco, Aris, 2009.  Spatial Analysis of the Relationship between Gang Injunctions and Gentrification in San Francisco.  Unpublished study.
Stewart, Gary, 1998.  Black Codes and Broken Windows: The Legacy of Racial Hegemony in Anti-Gang Civil Injunctions. The Yale Law Journal 107(7): 2249–2279.
Posted by Map Monkey at 8:29 AM