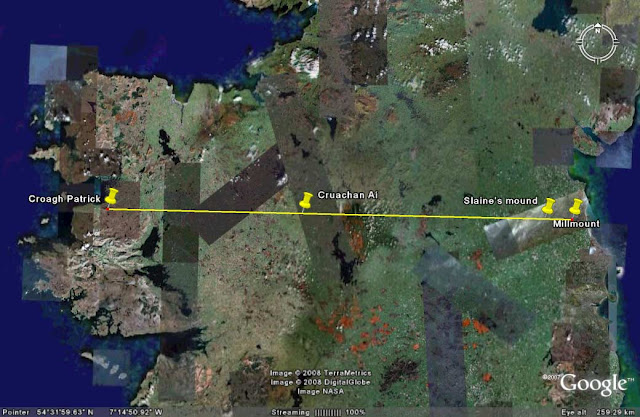 The Millmount-Croagh Patrick alignment stretches over 135 miles from the east coast of Ireland to the west, and has significant St. Patrick associations.
Happy Saint Patrick’s Day, or Lá Fhéile Pádraig!
It is only fitting, on this day celebrating Saint Patrick (Naomh Pádraig), that we take a look at some sites in Ireland associated with him.  Ireland is a magical landscape, filled with ancient place names recalling events and people which, remarkably, still live on in people’s memories.  In the ancient Celtic civilization that predated Christianity (and in many ways still remains a living culture) important features of the natural and human-made landscape (such as hills, rivers, standing stones, dolmen, megalithic ringforts and mounds, and earth works) were sacred sites of spiritual, historical, and cultural meaning.  Many archaeologists believe that some of these sites had specific astronomical alignments, as Stonehenge in England does, which may have provided vital information for a largely agrarian society.  These sites live on in importance amongst local people, and in some cases have been integrated into Christian beliefs.  Many of these ancient traditions have incorporated the legends about Saint Patrick, who came to Ireland millennia after these earthworks and standing stones were constructed.

As you may know, the calendar for the celebration of major Christian holy days and saints’ days was set oftentimes to roughly correspond to the celebration of pagan holidays, which it was hoped would ease in the conversion process to the new Christian religion.  By combining pagan celebrations and Christian feast days, the Church was often successful in bringing people into the Christian faith.  These pagan holidays, in turn, coincided for the most part with events in the natural world, often pertaining to agricultural activities and milestones in the seasons.
Examples of this include Christmas, celebrated at roughly the time of the winter solstice; Hallowe’en/All Soul's Day, substituting for Samhain, a Celtic holiday commemorating the beginning of winter on November first, the death of the agricultural year, and the time where the veil between the living and the dead was the thinnest; and Easter itself, the most important Christian holiday, which was named after Eostre, an Anglo-Saxon pagan goddess of springtime, rebirth, and renewal.
St Patrick’s Day is no exception to this calendric holiday conversion slight-of-hand, being celebrated close to the vernal equinox.
In the course of taking the “Great Equinox Journey of Saint Patrick,” one can trace an important alignment clear across Ireland, from Millmount, through Slane, and all the way west to Croagh Patrick.  According to legend, Saint Patrick landed on the Boyne Estuary at Inbher Colpa before making his way upstream to Slane, where popular accounts say that he lit the Paschal (Easter) Fire in defiance of the King of Ireland.  This great Easter Fire was ignited a few days after Spring Equinox, in the year 433AD.  Millmount, the supposed burial place of the Milesian leader Amergin, is the main ancient site overlooking Inbher Colpa.  From here, a few days after Spring (Vernal) Equinox, the sun sets directly over the Hill of Slane, the place where Patrick lit the Easter Fire.  Of course, Easter falls at the time of full moon following the Vernal Equinox.  It is likely there is significant astronomy associated with Patrick's story.  Slane is targeted from the east by an alignment after equinox with Millmount.  It is also targeted from the west by the chamber of Cairn T at Loughcrew.  Patrick's Journey from Inbher Colpa to Slane is described as his "equinox journey," and is tied in with Neolithic cosmology.  In the Neolithic, the sun at Spring Equinox was above the giant man figure of Orion - the huge light bearer of the sky.  At autumn equinox, the sun was housed in Ophiuchus, the serpent bearer.  Looking in the direction of Slane at the time of Autumn Equinox in the Neolithic, one would have been looking towards another giant man of the sky, Ophiuchus, grappling with the snake.
Using Google Earth, by extending the line from Millmount to Slane westwards it travels all the way to Croagh Patrick, perfectly intersecting the little chapel on the summit of the reek with breathtaking accuracy.  Significantly, this line skirts the hills of Loughcrew on its way, and also travels directly through Cruachan Aí, one of the largest archaeological complexes in the whole world, with 200 monuments located in a 10-mile radius.  Croagh Patrick, known in prehistoric times as Cruachan Aigle, is the place where, according to legend, Patrick banished the serpents from Ireland.  This connects some of the most significant places associated with Ireland's national Saint, and at the same time reflects an ancient cosmology which predates Patrick by three and a half millennia.  (portions of the last two paragraphs above, adapted from Mythical Ireland website at http://www.mythicalireland.com/)
Bru Na BÓinne Astronomical Alignments 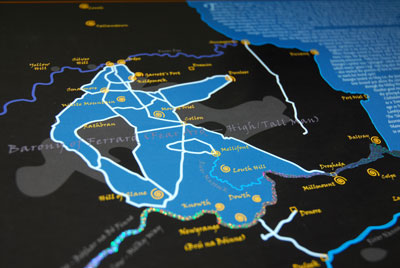 Ancient Geoglyph
http://www.thehighman.com/
The High Man is an enormous figure of a warrior- or god-like man, made up by a system of ancient roads near the east coast of Ireland in an area anciently called Ferrard, which means, literally, “High Man.”  Measuring 12 miles from top to bottom, the incredibly human-like character looms large on a very sacred and historical landscape.
Newgrange Neolithic complex