Amazing Visualization of the Most Recent 866 Earthquakes in Japan since March 11th. 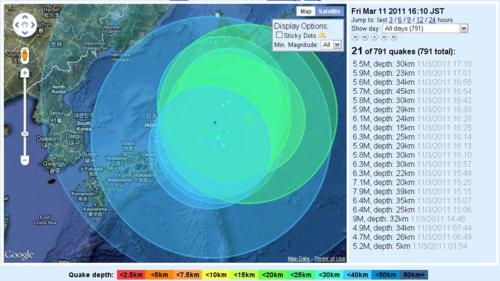 Check this out – it is AMAZING!  It depicts the series of earthquakes that have occurred off the coast of Japan since March 11, 2011.  Make sure you set the “sticky dots” to display, and show “Magnitudes: All” for the full effect.  The animation shows the time series of 866 quakes (so far!), at depths from less than 2.5 km to over 50 km.  You can set the animation to go for the whole period since March 11th, for the past 7 days, or just for today.  Today alone there were 14 quakes, as of 11:00 am EDT.
http://www.japanquakemap.com/today
Some other websites related to the Earthquakes in Japan (these sent by Kristen Grady): Radiation Map criticism): http://www.maproomblog.com/2011/03/an_irresponsible_radiation_map.php
Radiation Map (original): http://www.nytimes.com/interactive/2011/03/16/science/plume-graphic.html?ref=science
You may have seen this one already, because I think it’s made the rounds, but it is pretty amazing! (drag the new image over the old one)
http://www.abc.net.au/news/events/japan-quake-2011/beforeafter.htm
And this from Jenn Brisbane:
“I ran across this link this morning.  Amazing how useful community mapping can be in times of crisis.  Here is a google map that was created for people to list shelters in and around the Tokyo area.  Some of the shelters have a lot of detail such as # of beds, toilets, whether there is a nursery, and whether food is being provided.  I'm not sure if the people staying at these shelters are Tokyo residents or if they have transferred people from the tsunami-stricken areas to Tokyo.  Hopefully there are similar maps for shelters closer to the Sendai area.”
http://maps.google.co.jp/maps/ms?ie=UTF8&hl=ja&brcurrent=3,0x605d1b87f02e57e7:0x2e01618b22571b89,0&msa=0&msid=215507572864740295322.00049e31ae027259c4dda&z=12
Posted by Map Monkey at 11:00 AM