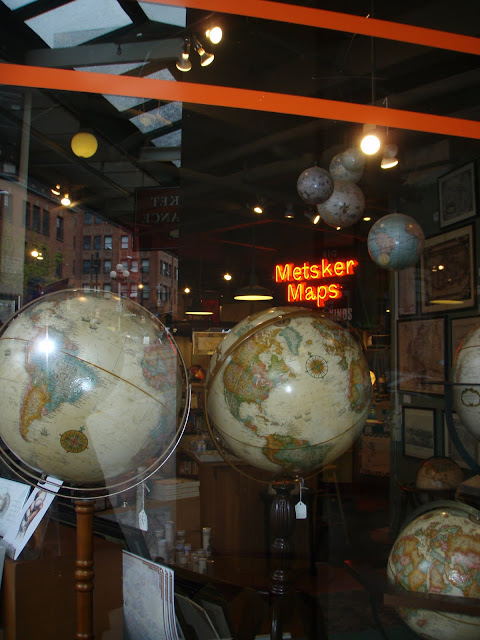 Metsker Maps in Pike Place Market – The Map Monkey likey!
I had forgotten how lovely this city is!  I got out here a couple of days in advance of the official start of the AAG conference, and have been spending some quality time reacquainting myself with Seattle.  A lot has changed since I was last here over 20 years ago.  For one thing, the last time I was here, the original Starbucks coffee shop in Pike Place Market was the one and only one in existence, and now look what happened!  All over the world!  About 1,700 stores in at least 55 countries. 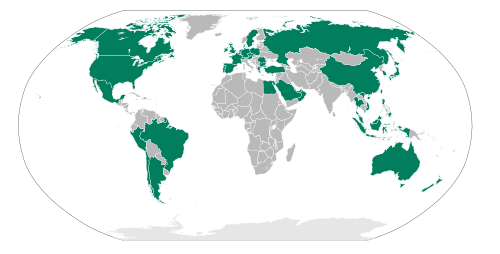 Starbucks - World Domination in Coffee Houses
Seattle reminds me of a slightly less glitzy and more gritty version of Vancouver, British Columbia.  And demographially, of course, it's much less Asian than Vancouver is.  But Seattle has, to me, a very Scandinavian feel – it has lots of interesting modern architecture, a great public park system, lots of public art, and is very clean and tidy and lively.  Window displays tend to be well-designed, and the city is busy but not frenetic.  And like a lot of Scandinavian cities, there is water (and boats) everywhere you look.  I also like the nice mix of age groups that you see all over the city.  All in all, it’s a swell place! 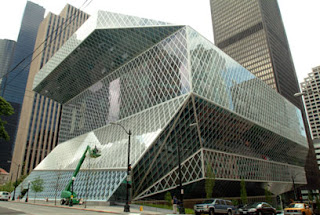 I love how the city has gone out of its way (or so it seems to me) to commission and collaborate with innovative and somewhat unconventional architects to design their public museums, library, and so forth.  For instance, Rem Koolhaas designed the new Central Library, a LEED-certified ediface built in 2004.


Frank Gehry designed the Rock and Roll Museum (there is an exhibit going on right now about Nirvana, arguably Seattle’s most famous export after Starbucks, Boeing airplanes, and Jimi, and this is the first time the museum is featuring the band, for some odd reason, even though the museum is over 10 years old).  What an incredible building!  The monorail goes right through the building!  It is an undulating, city-block-sized sculpture, more than it is a building.  All I can say is that the engineers must have hated doing the working drawings for the structural, HVAC, and electrical systems! Not a 90 degree angle or flat surface anywhere! The museum, also known as the “Experience Music Project” or EMP, was the brainchild of one of the Microsoft founders.  Apparently the inspiration for the museum’s design came from a film that Gehry watched about Jimi Hendrix smashing a guitar, as he was wont to do back in the day. 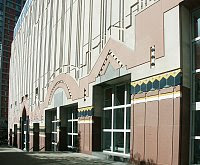 The Seattle Art Museum (SAM) (built 1991) by Venturi and Scott-Brown, (of “Learning from Las Vegas” fame).

The Seattle Art Museum also has an outdoor sculpture park down at the waterfront, (the Olympic Sculpture Park) with huge pieces by Alexander Calder, Claes Oldenburg, Louise Bourgeois, Richard Serra, and the like. 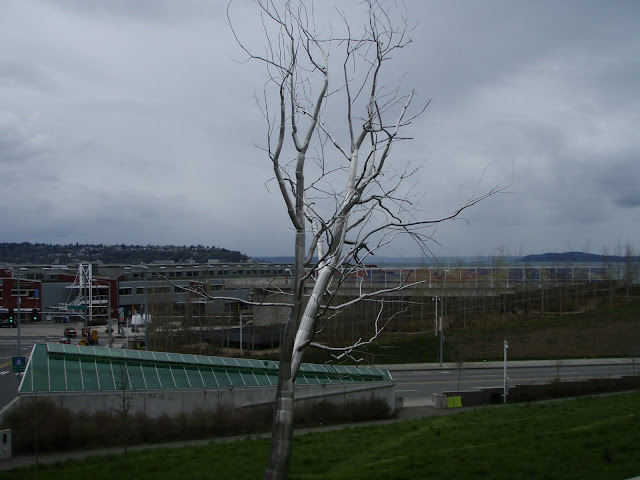 Polished Stainless Steel Tree, by Roxy Paine, the branches are made of 5,000 pounds of cantilevered steel. 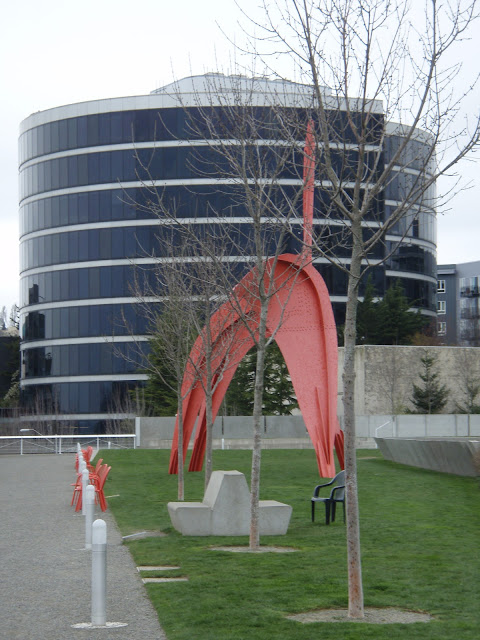 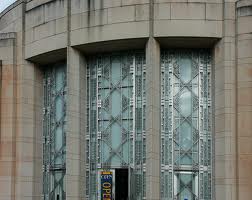 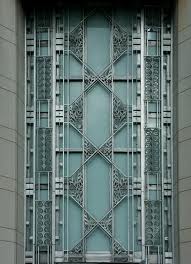 And the original building of the Art Institute of Seattle, designed by Carl Gould in 1933 in the then-au courant Art Moderne style, now houses the Seattle Asian Art Museum.  The building is a wonderful period piece, and all the stylistic details are meticulously maintained.  The rounded forms, the stepped surfaces, streamlined modernity, and the use of typical Art Moderne materials such as stainless steel, wood marquetry, and metal banding applied on top of travertine.  Carl Gould, who graduated from Harvard with a B.Arch. and then attended the École des Beaux Arts in Paris, apprenticed under McKim, Mead & White, and worked as a draftsman for Daniel Burnham.  Gould was active in Seattle in the early 20th century, designing many of the terra cotta structures that Seattle is known for, as well as the master plan and several building for the University of Washington, where he also started the Architecture Dept. 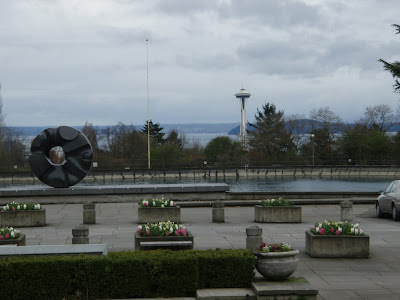 View from the steps of the Asian Art Museum, looking towards Volunteer Park Reservoir with Isamu Noguchi's "Black Sun" sculpture in foreground, and Space Needle in background.
The Seattle Asian Art Museum is in a beautiful location overlooking a small reservoir in one of the parks that the Olmstead Brothers designed as part of the master plan of park landscapes and boulevard system for Seattle in the early 1900’s.  Olmstead père, of course, famously designed Central Park and Prospect Park in NYC. 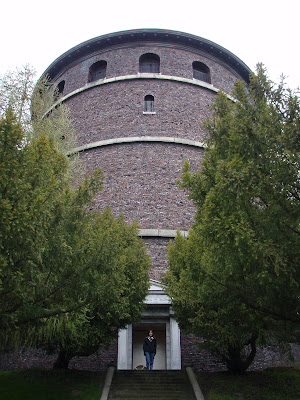 View of Water Tower
Also in the Volunteer Park is a fabulous old water tower - the façade is made of brick, but it surrounds a metal water tank that goes up the full height of the building.  You can climb up the spiral metal stairs to the top for wonderful views of the Seattle cityscape, the Space Needle, and the snow-capped mountains on a clear day.  Also at the top is a small exhibit on the Olmstead Brothers’ plans for Seattle’s park and boulevard system, from 1903.
The water tank itself, just inside the brick outer skin 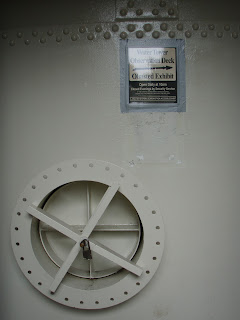 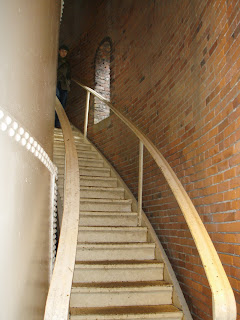 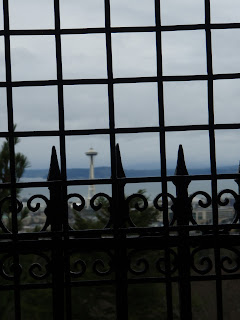 Left: The spiral steel stairs encircling the actual metal water tank, between the outer brick walls and the tank itself. Right: View from one of the arched windows at the top of the water tower, Seattle's Space Needle (1961) in the distance. 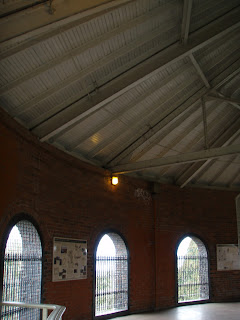 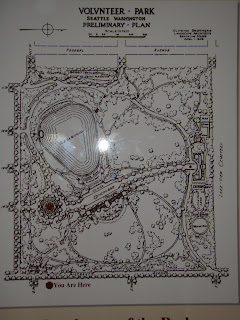 Left: On top of the water tower. Right: The Olmstead Brothers' preliminary plan for Volunteer Park, named after the volunteer soldiers from Seattle who fought in the Spanish-American War of 1898. 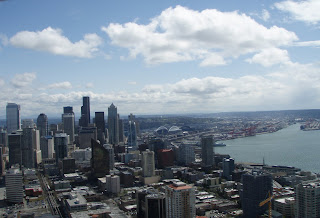 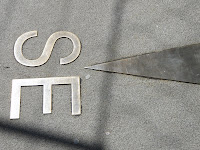 Left: View of downtown Seattle and port from the Space Needle, built for the 1962 World's Fair, and at about 600 feet tall, was for some time the tallest structure west of the Mississippi; Right: Brass Compass Points embedded in the Space Needle observation deck walkway. 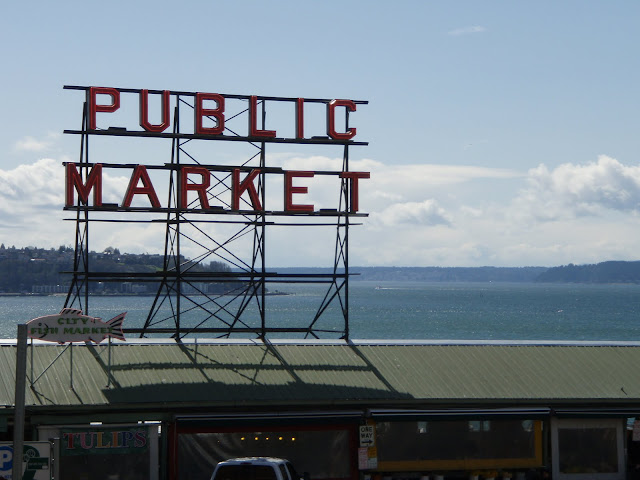 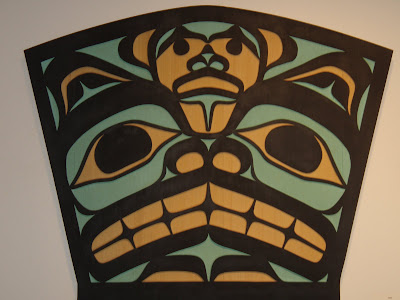 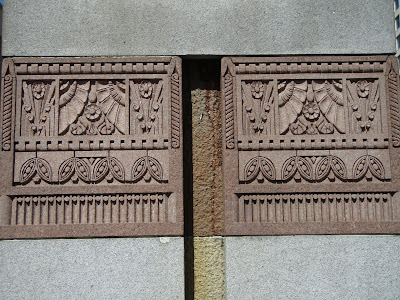 Detail of terra cotta decorative element.  Terra cotta became very prevalent as a building material in Seattle after the Great Seattle Fire of 1889, since terra cotta was considered to be a fire-proof construction material.
Photos by the Map Monkey, April 10-11, 2011
Posted by Map Monkey at 1:19 AM