Around the World in 80 Seconds

Le Tour du Monde en 80 secondes (with apologies to Jules Verne!)
This is pretty cool!  Alex Profit, a French filmmaker, traveled around the world taking thousands of photographs and then made a stop action video, sequencing thousands of photos together.  There’s a cute little globe that "travels" around with him and shows up in the left corner of every shot, with a push pin indicating where we are, but the video is pretty fast moving, and a bit dizzy-making – it really doesn’t last much longer than 80 seconds.  Pay attention to the way he transitions between the cities, too – his segues are pretty amazing work.  And keep in mind that this is not really a video, it is all single photographs joined together. And, very charmingly, he thanks Jules Verne at the end in the acknowledgements frame!
http://www.alexprofit.com/alex_profit/le_tour_du_monde_80_secondes.html 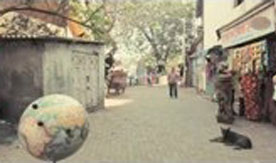 En Afrique,
Photos by Alex Proft
Around the World in 2000 pictures
http://www.alexprofit.com/alex_profit/around_the_world_in_2000_pictures.html
Then in this video, which is slightly longer at 3 minutes, Alex went around the world in 24 days and visited 8 urban locations, took thousands of photographs, and edited them all together again.  Quite entertaining.
These are the cities he traveled to: Paris, Barcelona, Berlin, St. Petersburg, Shanghai, Tokyo, New York, and London.  In some ways these are mainly the obvious choices, and a not terribly inspired selection.  Of course one can always quibble about someone’s choices.  Why not Rome?  Why not Istanbul?  Why not Rio?  Of the eight cities, only three are outside of Europe, and only one is a New World city.  They are all basically mid-latitude cities in the northern hemisphere.  Oh, well, it’s still pretty cool, even if it’s not the world’s more representative, varied, or unique set of cities.  As it turns out, these two videos were commercial ventures, commissioned by Sony and L’Oreal, respectively, so maybe the choice of locales was not his own.
(In the video, Barcelona was my favorite city, probably because of all the incredible Gaudi mosaics, architecture, and sculptures he photographed.)

Here’s his website, and there are lots of very excellent photos and other films on it.
http://www.alexprofit.com/alex_profit/Accueil_Alex_Profit.html
Posted by Map Monkey at 9:45 AM