Meet Me at the Center of the Earth 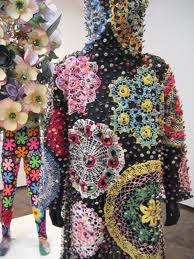 Syncretism, Symbolism, and Similarities in Seattle
Meet Me at the Center of the Earth is an amazing new exhibit at the Seattle Art Museum.  It’s advertised on TV, posters, and flyers all over town, but the photos can’t prepare you for seeing the real thing.  Nick Cave (not to be confused with the OTHER Nick Cave, of the Bad Seeds) is a Chicago artist/sculptor/dancer/fashion (?) designer - and I use that word “fashion” advisedly and somewhat ironically - who works mainly with found objects, and has an incredible sense of which crazy disparate elements work with what.  His work draws on syncretism, symbolism, and similarities of materials with costumes and ceremonial garb from all corners of the earth.  The pieces are displayed on life-sized mannequins, and all are wearable (more or less).  They can alternately (and sometimes all at once!) be reminiscent of African and Papuan-New Guinean raffia clothing, Haitian sequined banner work, Mardi Gras-Carnivale costumes, Native American Shaman regalia, and the elaborate vestments of mediaeval European clergy, complete with bishop’s miter-shaped headdresses.  Elements of pop culture are also liberally sprinkled throughout the designs.
Cave created these outfits as an antidote to the modern male business attire, which has become ubiquitous around the world, replacing indigenous clothing for men even in very traditional societies, and much more often than women’s clothing is replaced by Western wear.  Cave’s designs are certainly an antidote to business wear!  Just walking around the galleries is enough to make you feel that you look very drab, indeed, regardless of what you are wearing that day.  His "Soundsuits" are total sartorial splendor.  He calls his works “Soundsuits” after the sounds produced by wearing and moving in them.  One of the best parts of the exhibit were the videos of people wearing the costumes and dancing/prancing/jumping/rolling around in them, especially the feathered and raffia ones that really moved.  In one segment, several of the feather-garbed people rolled around on the floor, and the camera was filming them from above.  The only way you could tell that these rolling colored feathered forms were actually people inside of these concoctions was every once in a while you would glimpse a foot sticking out.  Another segment had several of the large pink feathered beings jumping on pogo sticks in slow motion, and you could just make out the tip of the pogo stick from under the feathers.
Here’s the soundtrack to the video, a nice example of pseudo-mid-90’s Deep House, by Phonique, featuring Ian Whitelaw, called “Our Time, Our Chance,” and it is appropriately dreamy music with a back beat to accompany the jumping feathered figures:
http://www.youtube.com/watch?v=eXkTWRzlJLo&feature=related
Here’s a slightly longer version, the Andre Lodemann remix:
http://soundcloud.com/lodemann/phonique-our-time-our-chance-andre-lodemann-remix 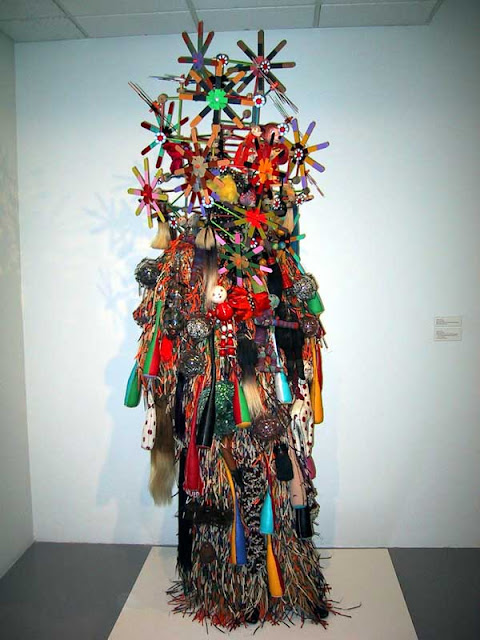 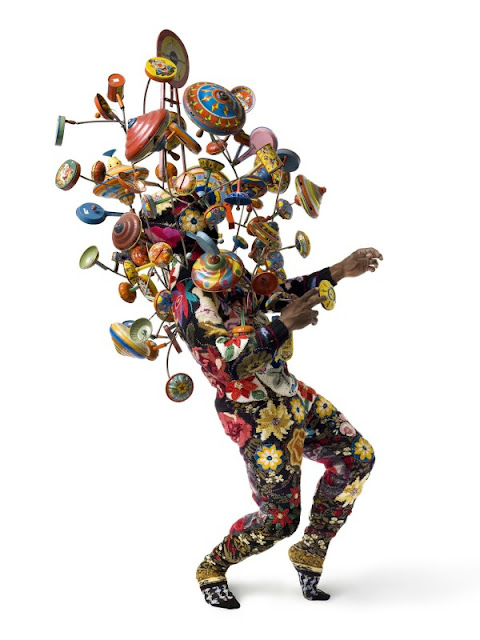 The found objects used in the designs include everything from tinsel and yarn mandalas en masse, to dozens of Hummel-like porcelain bird figurines, arranged in a cage-like structure around the mannequin’s face.  In another, the face and upper torso was surrounded by a constellation of tin toys, mainly flying saucer-like objects from the 1950’s.  Several of the outfits were completed covered in mother of pearl buttons, all sewn on with bright aqua thread.  These outfits reminded me of the English Cockney button people (the "Pearlies") of the 19th century.  Some of Cave's pieces were made entirely of crochet hats and bags and doilies all sewn together, very expertly so that you could not tell where one object ended and the next began.  One (and this was a personal favorite of mine) was constructed completely of tiny stuffed animals.  In almost all of the pieces, the face is obscured. 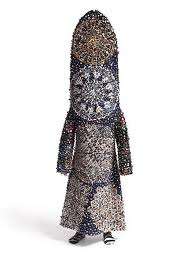 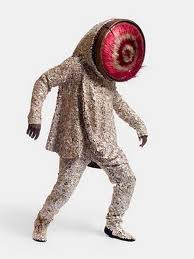 The title of the show, “Meet Me at the Center of the Earth,” brings to mind fantastical places like those encountered by falling down the magical rabbit hole in Alice and Wonderland, or Journey to the Center of the Earth (a movie that scarred the bejeebers out of me when I was a youngster).  It evokes a world of altered reality, where nothing is as we know it - where discarded items and objects of distain become treasures, objets d'art, and things of beauty.  In the exhibit, the individual works have no labels, and there is hardly any wall text “explaining” the pieces to us.  We are left to interpret them on our own, and to wonder about the cosmic questions of “What is beauty?” “What is art?” and “What is fashion?”
A couple of short videos from the Museum's website: 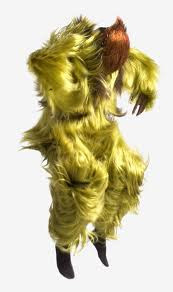 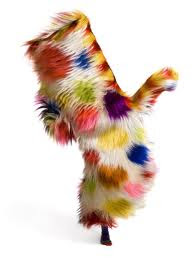 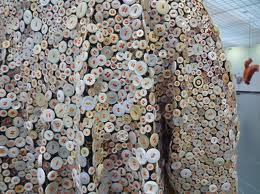 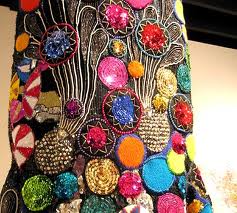 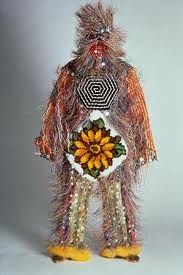 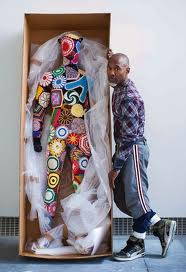 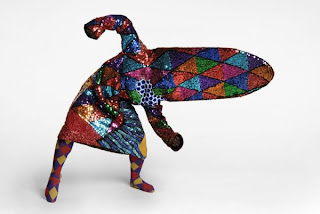 Left: Nick Cave standing with one of his works. 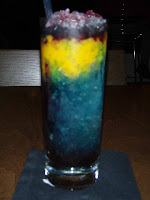 At the museum restaurant, they make special drinks to go along with the exhibits, and the one they created to match up with this exhibit is called the Cave In.  It consists of pepper-infused vodka, blue curacao, mango puree, and pomegranate juice.  In coloration and layering of the elements, it was very much like one of Cave’s feathered beings.

Photography in the Nick Cave exhibit was not permitted, so the photo images of his works shown here are by James Prinz, Courtesy Jack Shainman Gallery, New York.  The Seattle Art Museum also has quite nice collections of Northwest Coast Indian art, African, and Pacific art, by both traditional and contemporary artists, including many traditional costumes.  As you walk around the galleries,  you can really see some of the influences on Nick Cave's work. 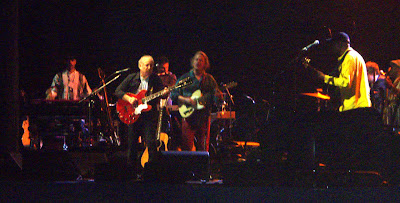 I had the good fortune to snag the very last ticket (and on the aisle!) to see Paul Simon last night at the WaMu Theatre.  He has a masterful group of musicians playing with him, and performed a number of songs from his new album, which was just released this week.  This is his first major tour in 4 years, and Seattle was the first night of the tour, so it was very exciting.   After playing a full set, they did about half a dozen encore songs, including a solo “Sounds of Silence.”   Below is a link to a video of a rehearsal for one of the new songs “The Afterlife.”  If this doesn’t get your toes tapping, then, man, you might already be in the afterlife, and don't even know it yet!

http://www.youtube.com/watch?v=rVTlueB-ReI
“The Afterlife” by Paul Simon
After I died, and the make up had dried, I went back to my place.
No moon that night, but a heavenly light shone on my face.
Still I thought it was odd, there was no sign of God just to usher me in.
Then a voice from above, sugar coated with Love, said, "Let us begin".

OK, a new kid in school, got to follow the rule, you got to learn the routine.
Woah, there's a girl over there, with the sunshiny hair, like a homecomin' queen.
I said, "Hey, what you say? It's a glorious day, by the way how long you been dead?"
Maybe you, maybe me, maybe baby makes three, but she just shook her head...

Buddha and Moses and all the noses from narrow to flat,
Had to stand in the line, just to glimpse the divine, what you think about that?
Well it seems like our fate to suffer and wait for the knowledge we seek.
It's all his design, no one cuts in the line, no one here likes a sneak 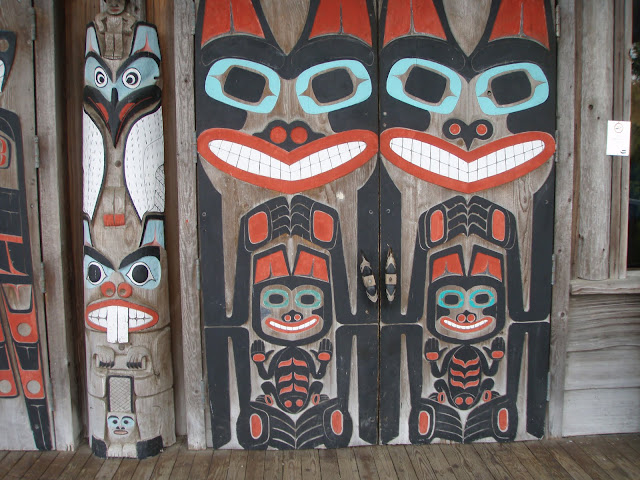 Doors to the Longhouse (Coast Salish tribe)
Then, this being my penultimate day in Seattle, I took a boat ride out to Blake Island, the reputed birthplace of Chief Sealth, a man of peace and great wisdom, after whom the city of Seattle was named.  On the island is a recreation of a Coast Salish tribe’s longhouse, where we had a traditional salmon bake, clam and venison stew with root veggies, and watched a dance performance with sound-producing masks.  Since it is a tourist attraction, I’m dubious about the authenticity, but it was enjoyable nonetheless, and the narrator said the performance was designed in collaboration with tribal elders. 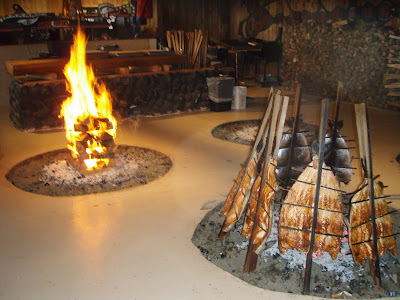 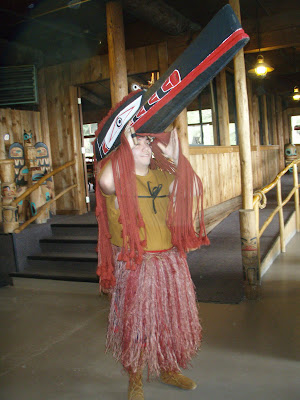 Above: Salmon Bake in the Longhouse; 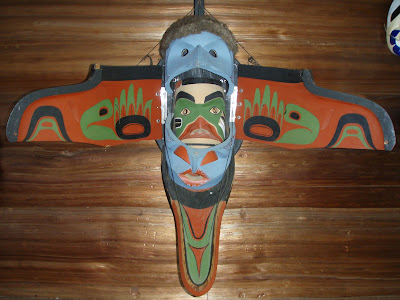 Above: one of the performers in the dance showing how the mask works.  By pulling hidden strings, the beak makes an alarmingly loud clacking noise;
Left: A Transformation Mask (the mask opens to reveal another character within).
Photos by the Map Monkey, April 15-16, 2011
Posted by Map Monkey at 3:26 AM