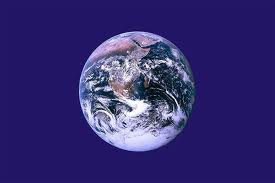 Earth Day Flag
Once again it is that time of year where we celebrate the Earth, and renew our awareness of our adverse impacts on the planet.  Earth Day started in 1970 in the U.S. as a reaction to what was seen as out-of-bounds excessive manhandling of the environment, at a time when many Americans were totally oblivious to the issues, and a smaller number of others were totally consumed by them.  Books like Operating Manual for Spaceship Earth by Buckminster Fuller, Silent Spring by Rachel Carson, and the The Population Bomb by Paul R. Ehrlich had recently been published, and environmentalism was beginning to enter mainstream consciousness.  (See http://en.wikipedia.org/wiki/Earth_Day or http://earthday.envirolink.org/history.html for a detailed history of Earth Day.)  The first Earth Day was seen by the mainstream press not as a celebration or a consciousness-raising event, but as a “protest demonstration,”  basically an expansion of the Vietnam War protests, mainly populated by “hippies, flower children, and Communist sympathizers.”   The fact that April 22 was also Lenin’s birthday didn’t help lessen those stereotypes much, either!
You have to watch this!  http://www.hulu.com/watch/67649/earth-day-first-earth-day-april-22-1970   It is a quick snippet of an NBC newscaster reporting on the events of the first Earth Day, back on April 22, 1970.  It’s remarkable how much news reporting has changed in the intervening years.  Mostly talking heads, little actual footage, no fancy infographics, and a thinly disguised contempt for the whole Earth Day proceedings, despite the anchor’s dispassionate tone.  It will give you a good insight into (or reminder of) the tenor of the times.
Parts that I found very interesting – in Philadelphia, thousands of “ghetto residents” boycotted the Earth Day “protest” there, arguing that the nation’s newfound infatuation with the environment took attention away from the needs of the poor.  This was, of course, before the Environmental Justice movement made the connections between poor and "minority" populations, disproportionate environmental burdens, and adverse health outcomes. In fact, the poor were (and remain) the most heavily impacted by negative environmental factors, including being the most vulnerable to the impacts of global climate change.
Senator Jacob Javits (R-NY) on the steps of the New York Stock Exchange, protesting the focus on the environment as a distraction against other pressing issues of the day, such as poverty, the ending of the war in Vietnam, housing, alienation, racial tensions, gross inadequacies of health care, etc.  At this point, people still didn’t get that all this stuff was connected!  If, back in 1970, the government had dedicated sufficient resources to research and development of sustainable energy, for instance, more Americans would have good jobs and we probably wouldn't be in Iraq today.
And, in remarks prepared for the American Geophysical Union, scientists gave an “awesome” Earth Day warning, about pollution warming the earth, creating a “greenhouse effect,” thereby melting the polar ice caps, and causing another Noah’s flood.  The news anchor says “greenhouse effect” as if it’s the very first time he has uttered the words, which in fact it may very well have been. 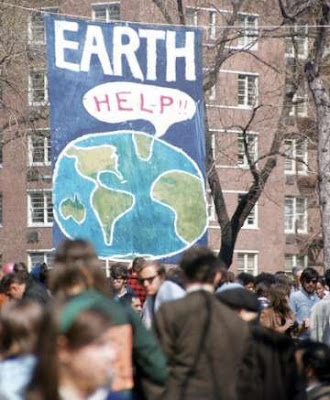 A crowd of people gather near a large poster of planet Earth calling for “Help!!” on the first Earth Day conservation awareness celebration on April 22, 1970, in New York City. Denis Hayes, head of Environmental Teach-In, is seen in the group's offices on April 8, 1970. The Washington organization coordinated activities for the first Earth Day, which included teach-ins on the environmental pollution crisis and overpopulation at campuses across the country.
Associated Press

Now-a-days, unfortunately, most Americans feel that they have heard quite enough about all the problems our lifestyles have caused, and many are heartily tired of all the calls-to-arms over global warming, environmental degradation, etc.  Many people are skeptical that we have anything to do with global climate change, that it is just another “natural cycle” of the Earth, a hoax perpetrated by scientists, Democrat politicians, and other famously “liberal” people.   It has been even said that Earth Day has outlived its usefulness, and there is even somewhat of a backlash against environmental protection – at the very least, many people have gotten extremely blasé about it.
As someone who celebrated the very first Earth Day (in true flower power style), as well as the big 20th anniversary Earth Day celebration in Central Park in 1990, with over a million of my closest friends (plus the B-52’s!), I would hate to see the commemoration of Earth Day fall by the wayside.  On the other hand, we obviously need more than just the one day to remember our responsibilities to reform our behavior and break the insane consumption-waste cycle, in order to produce a livable, equitable, and just world for all.
I just took the ecological foot print quiz at Earth Day Network, and although I consider myself a fairly low-impact person, (fervent recycler, user of public transportation, multi-family housing dweller, eater of locally-grown food, etc.) I found out that if everyone lived as I do, it would take 4.6 Earths to support us all!  Very sobering.  Take the quiz yourself, it’s kinda fun – you get to create a little avatar of yourself, and at the end there are helpful tips about how you can improve (reduce) your footprint.  http://files.earthday.net/footprint/flash.html?key=46441043
Naturally, it is a given that individuals can only do so much by themselves, regardless of how much they recycle or eat like locavores, and I don’t think we should take on the burden of being the bad guys all by ourselves.  Corporations and governments have to do much more, and the cumulative impact of their actions will be fairly dramatic compared to the cumulative effect of individuals’ behavior modifications, but every little bit helps.  I certainly intend to step up my awareness and make whatever modifications I can to reduce my footprint even further.
And just to cheer you up and inspire you after you realize it won’t be feasible for us to go merrily along anymore in our profligate ways, and that it will require a gazillion worlds to support us if all the billions of people around the world decide to and gain the means to live as we heedless Americans do, take a look at some of these NASA photos of the Earth from above.
http://www.aolnews.com/2011/04/21/the-earth-from-above-images-from-nasa-gallery/?icid=maing-grid7%7Cmain5%7Cdl1%7Csec1_lnk3%7C57670 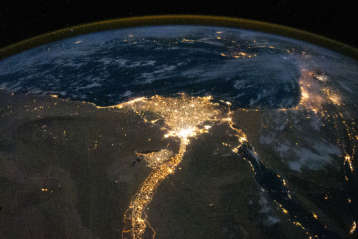 "The Nile River and its delta look like a brilliant, long-stemmed flower in this astronaut photograph of the southeastern Mediterranean Sea, as seen from the International Space Station on Oct. 28, 2010. The Cairo metropolitan area forms a particularly bright base of the flower."  The Earth From Above, NASA
Posted by Map Monkey at 10:35 AM