One man, one dot

Detail - Dot Density Map of U.S. and Canada showing one dot = one person.

OK this is taking dot density mapping to another level altogether!  Brandon Martin-Anderson, who does something called “Computational Urban Planning” at the MIT Media Lab, created a dot density map, but it’s not your normal dot density map, where 1 dot equals 1,000 people or what-have-you.  His map has one dot for each and every person in Canada and the United States.  That’s right - over 340 MILLION dots on one map (plus location labels!)  How did he do it?  Well, as the students in the Programming for GISc class last term will appreciate, it was done with Python scripts and a lot of fancy footwork.  You have to zoom in really, really far to see how the individual dots look (they look like very very very very small dots).  If you look at the map displaying the entire landmass, you see population centers more like smudges rather than dots.
Why did he do it?  You might well ask.  Here’s what he says on the website: “I wanted an image of human settlement patterns unmediated by proxies like city boundaries, arterial roads, state lines, etc.  Also, it was an interesting challenge.”   Well, that last bit is undoubtedly true (the challenge part) but the map IS mediated by proxies, it’s just that the proxy is very small (the census block, the smallest geographic unit whereby the Census Bureau aggregates individual data.  There are generally from 0 - 600 people in a census block.  Yes, some census blocks have zero population.  In Wyoming, for instance, 64% of the census blocks have no population.  The minimum size of a census block is 0.69 acre.  There is no maximum size.
The main thing in his map that is unmediated is the one person, one dot concept.  Each dot on his map is not a proxy for multiple people.  And since in many parts of the continent the census block is such a small area, randomly assigning the dots within the block is reasonably accurate depiction of where people live.  This breaks down a little bit in the less populated parts of the U.S., where the census block covers a much larger territory, since the geographic size of the block varies from place to place, but the population size within the blocks stays fairly constant.  (For a nice history of the evolution of U.S. census enumeration districts, see http://www.census.gov/geo/www/GARM/Ch11GARM.pdf  )
In any event, the dot map, while looking not too much different at first glance from the traditional dot density maps using 1 dot = many, is actually quite unique.  For hard-core Python-ists, he gives the codes as well as all the raw data he used.  I have to admit, I was a bit lost here.  Don’t even know what a “quadkey” is although he states it is a kind of cheapo spatial index (used to sort the dots so you can generate the tiles?)

See the interactive map at:  http://bmander.com/dotmap/index.html

Read how he put it all together at:  http://bmander.com/dotmap/methods.html

Some other cool dot density maps in the blogosphere recently: 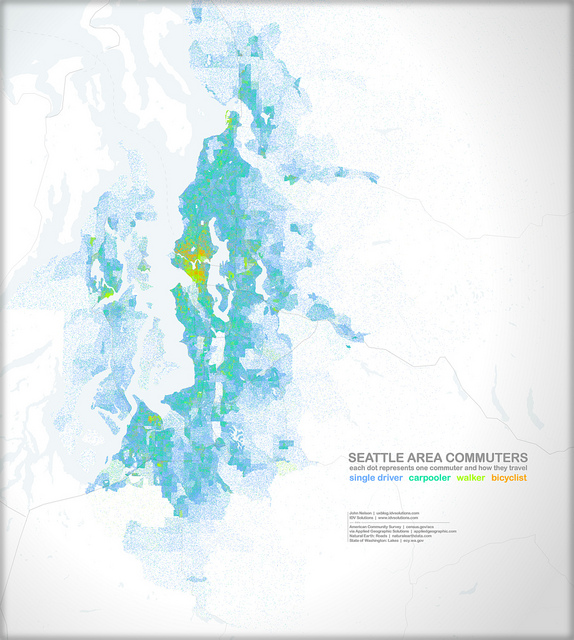 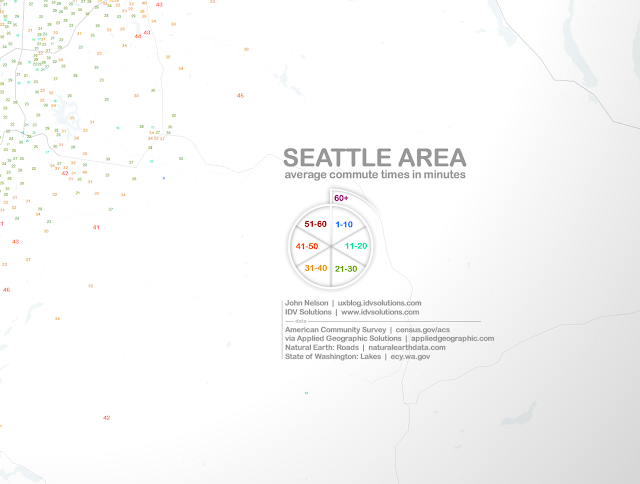 Thanks, Natalia, for sending me the original link to the ultimate dot density map of all times!