Well, we city-dwellers have known all along that it is more environmentally beneficial to live in high density urban areas.  But now we have the unfortunate evidence that, alas, any carbon footprint benefits accruing to cities are more than offset by the much higher carbon footprint of our suburban counterparts in the nearby hinterlands, and based upon a visual inspection of the mapped data, it appears that the wealthier suburban communities are definitely the bigger energy hogs than their poorer suburban neighbors or rural areas.  There are a series of cool interactive maps (at http://coolclimate.berkeley.edu/maps and thanks, Tom Paino, for sending me the link) allowing you to zoom into any zipcode in the continental US and see how the annual household carbon footprint has been tallied, considering transportation, housing, food, goods, and services.  My zipcode, 10033 in Washington Heights, NYC, for example, is rather carbon thrifty, at 34.6 metric tons of CO2 equivalent, while just across the Hudson River in 07632 Englewood Cliffs, NJ, it is nearly double at 69.5, and in Old Westbury, on Long Island to the east of NYC, it is 95, almost triple.
Baltimore City, MD (21201) is positively parsimonious at 25, and Baltimore shows up on the map as a green oasis in a sea of reds and oranges, denoting the surrounding suburban household carbon footprints double that of the inner city.   There was one thing that I question on this map and that is there is no legend, so we cannot see what the class ranges are for each color.  When you touch on each zipcode, the stats for that zipcode pop up, but it seemed to me that the same color represented different ranges, perhaps dependent upon the state.  Therefore it is difficult to make any consistent inferences based on the zipcode color, which obviously can be somewhat misleading in making visual comparisons.
There are two other interactive maps: Average annual household energy (electricity, natural gas, other) carbon footprint by zipcode (where, again the contrast between Washington Heights in Upper Manhattan around 6 and Old Westbury at 16 is amazing!).
The third map is average monthly vehicle miles traveled per household by zipcode, (and of course in many parts of NYC, households have on average as low as 0.1 vehicle per household.  In other words, in many parts of the city, only one in 10 households has a car, on average.  The vehicle miles traveled is figured by multiplying vehicle miles traveled per month by the number of vehicles per household.  I found the assumptions of this calculation a little odd – nearly every zipcode in the country had households driving about 1,200- 1,400 miles per month, and I think there should be much more variation in this figure.  Only in some isolated areas in the western and northern US were households driving 1,500-1,700 miles per month, otherwise it seems that every household puts on essentially the same mileage.  I think if you live in NYC and are crazy enough to have a car there, the last thing you would be doing is sitting in your car racking up 1,200 miles a month.  If so, that’s about all you would have time to do traveling at the snail’s pace that is NYC traffic!  That’s an average of 40 miles per day, and virtually no one within the city would drive a 40 miles per day commute or just go joy-riding around for 40 miles per day.
But other than those relatively minor cavils (and knowing how difficult it is to keep a nation-wide study consistent when there is such extreme variation across zipcodes) the maps are fascinating and the study seems sound. 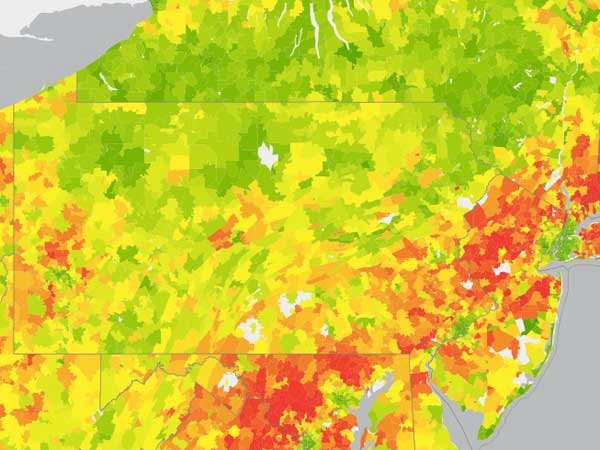 This shows how the suburban areas create a much higher carbon footprint than the cities or rural areas, from Philadelphia to New York City.
Here’s the abstract from the paper the maps in which the maps appear:
“Which municipalities and locations within the United States contribute the most to household greenhouse gas emissions, and what is the effect of population density and suburbanization on emissions? Using national household surveys, we developed econometric models of demand for energy, transportation, food, goods, and services that were used to derive average household carbon footprints (HCF) for U.S. zip codes, cities, counties, and metropolitan areas. We find consistently lower HCF in urban core cities (40 tCO2e) and higher carbon footprints in outlying suburbs (50 tCO2e), with a range from 25 to >80 tCO2e in the 50 largest metropolitan areas. Population density exhibits a weak but positive correlation with HCF until a density threshold is met, after which range, mean, and standard deviation of HCF decline. While population density contributes to relatively low HCF in the central cities of large metropolitan areas, the more extensive suburbanization in these regions contributes to an overall net increase in HCF compared to smaller metropolitan areas. Suburbs alone account for 50% of total U.S. HCF. Differences in the size, composition, and location of household carbon footprints suggest the need for tailoring of greenhouse gas mitigation efforts to different populations.” 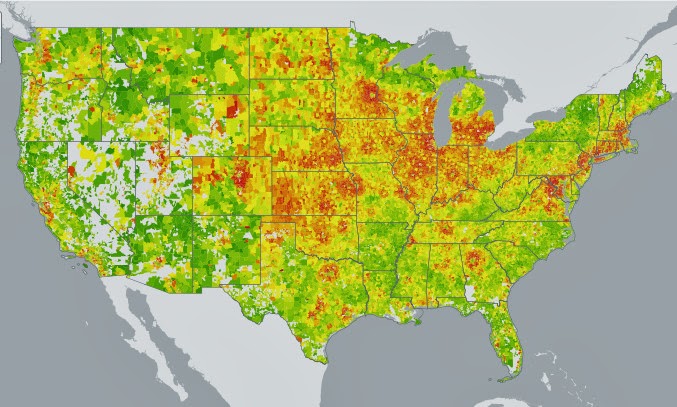 Frequently asked questions about the paper (and including limitations of the study and urban planning implications) are at: http://coolclimate.berkeley.edu/files/coolclimate/Jones-Kammen-CarbonFootprint-FAQ-EST-1-10-2014.pdf

Also, here’s another cool website with interactive maps, showing global carbon footprints by current emissions, per capita, intensity, and cumulative emissions, going back to 1850 at the dawn of high industrialization.  Very enlightening!  http://environment.nationalgeographic.com/environment/energy/great-energy-challenge/global-footprints/ 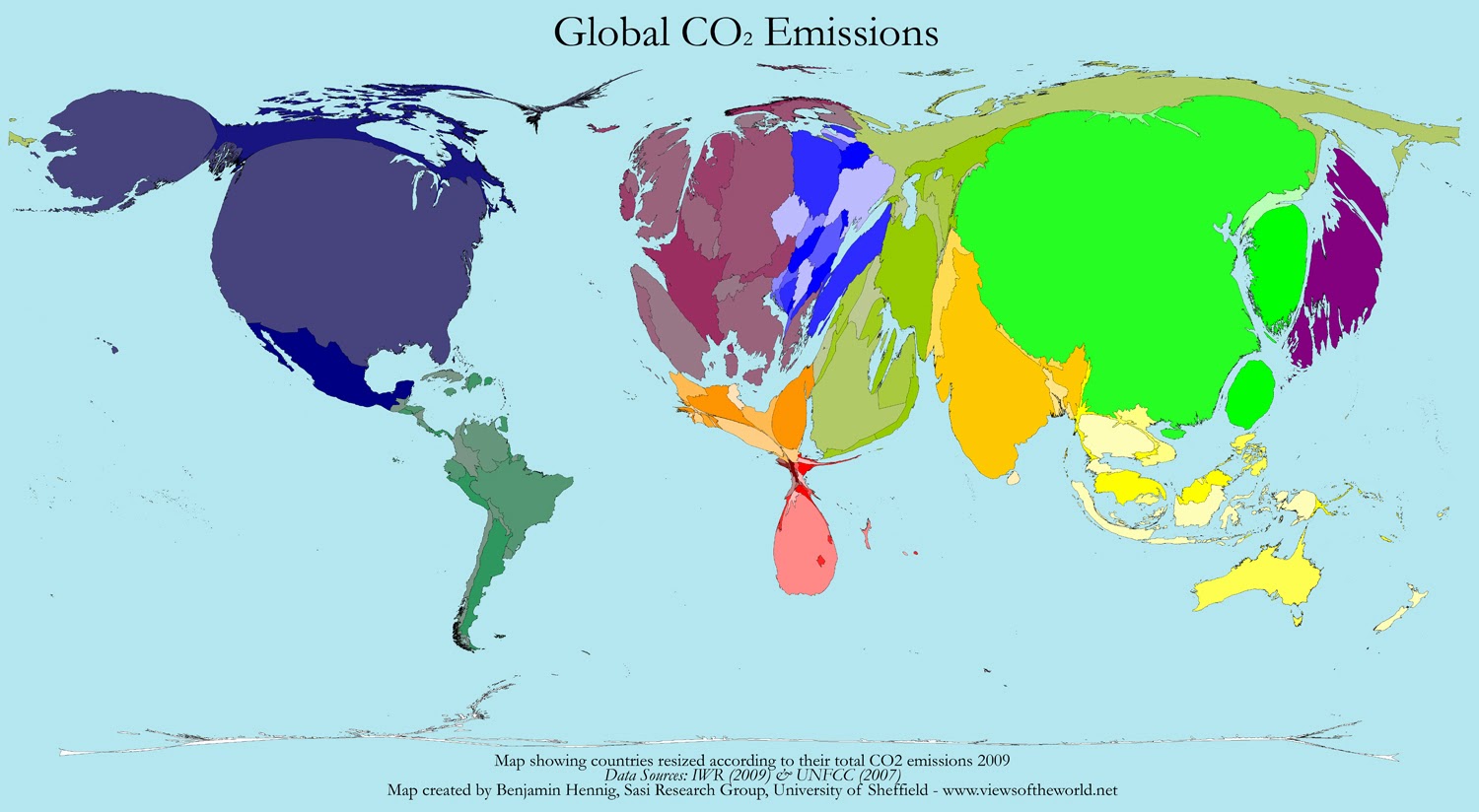 And we couldn’t forget Danny Dorling’s amazing global cartograms of CO2 emissions, from the Worldmapper team at WWW.worldmapper.org
Posted by Map Monkey at 5:38 PM