Hand-Drawn Maps at the London Museum 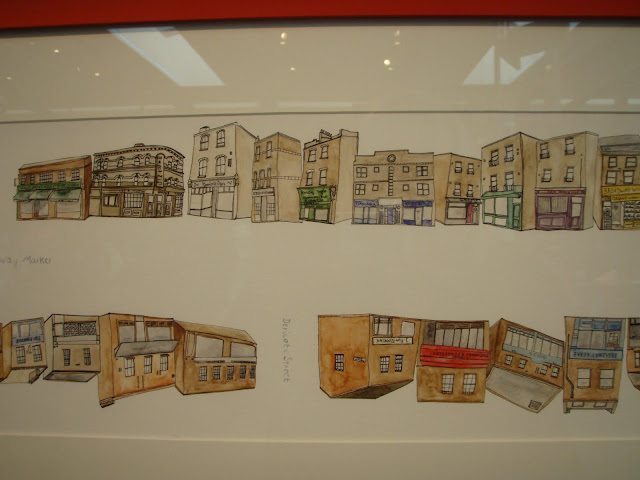 Broadway Market – by Alexander Schmidt.  Pen and watercolour on paper.  “This panel shows a zoomed-in view of just one street from my larger map.  I’ve tried to convey the colour and vibrancy of one of the liveliest streets in the borough of Hackney.” 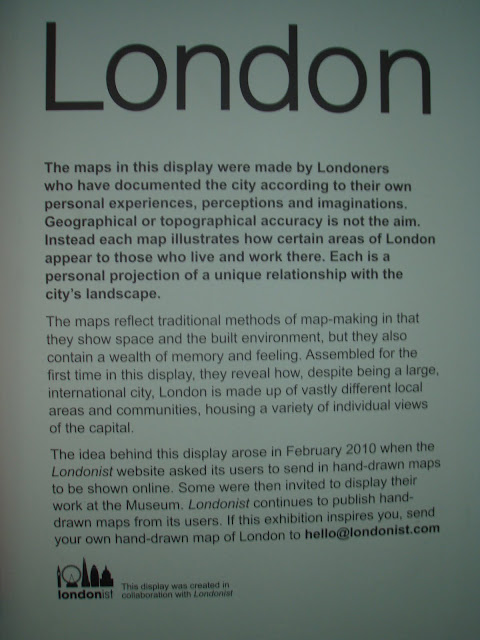 Text from the exhibit of hand-drawn maps

Right now the London Museum is hosting a small exhibit of hand-drawn maps of London in the museum’s entrance hall (through Sept. 11, 2011).  This was also very interesting, and is an on-going effort on the part of the museum and something called the Londonist (similar to NYC’s Gothamist?) to assemble a collection of these maps from whomever wants to try their hand at producing one.  I’ve included some of them here, with descriptions by their authors. 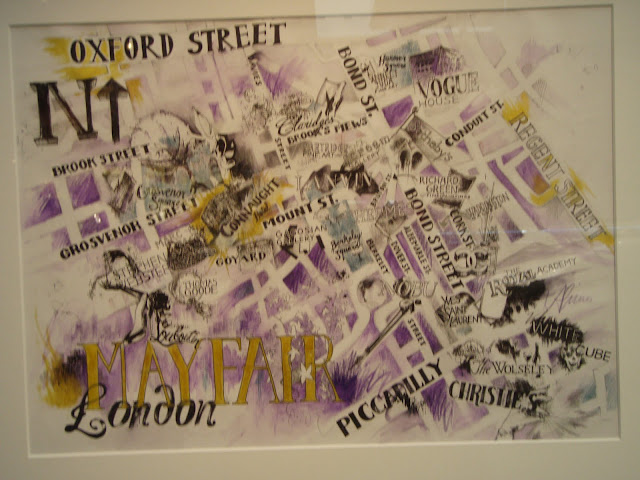 Mayfair Map – by Alexander 6.  Pen, pencil and watercolour on paper.  “I wanted to create a map that conveyed the decadence of Mayfair, with its old money, big up-scale brands, and the most luxurious hotels you can imagine.  These are the places that the ‘rich me’ wants to visit but I am too scruffy and daren’t darken their doors.” 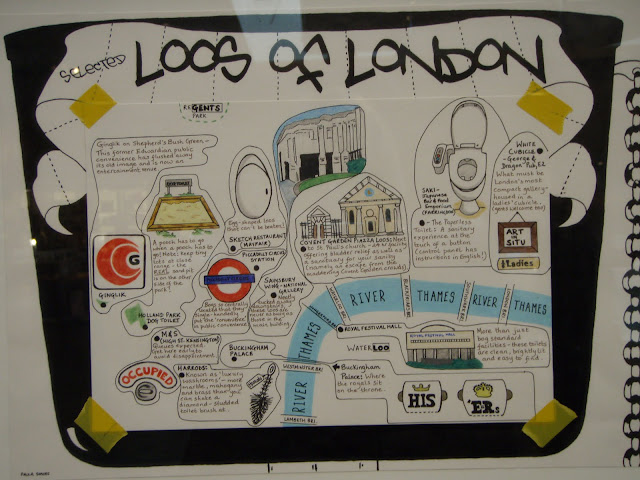 Selected Loos of London – by Paula Simoes. Pen, acrylic, colour pencil and PVC insulation tape on paper.  “As a native Londoner I wanted to see the City in a new light and focus on an often overlooked aspect – its loos!  Walking around London with a young child in tow, I know how important it is to be able to find a loo as quickly as possible” 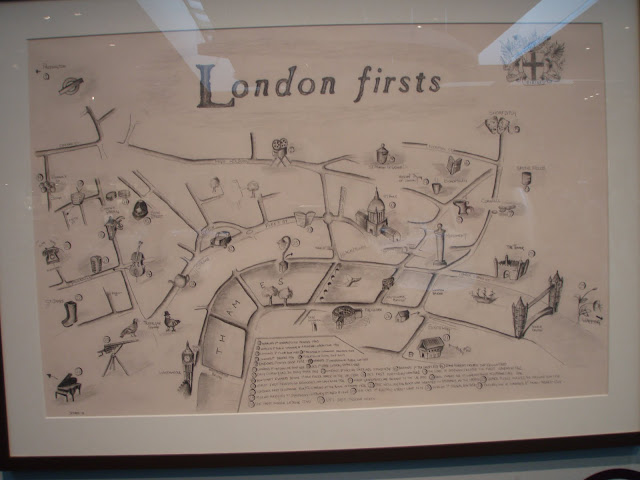 London Firsts - by by Julia Forte.  Pencil on paper.  “I have lived in central London for 20 years, and became interested in London firsts when I saw that TV had been invented around the corner from where I live.  This led me to discover what other pioneering events had happened here.” 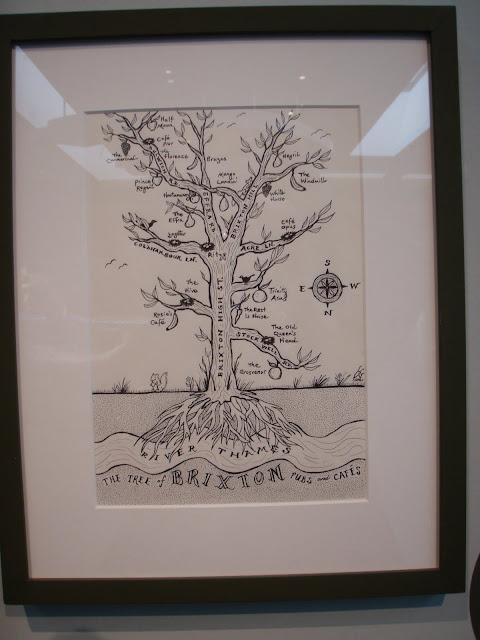 Brixton as a Tree – by Liam Roberts.  Pen on paper.  “The inspiration for Brixton as a Tree came from first designing the map upside-down, bringing the south to the top.  From here, Brixton’s main arteries looked like branches of a sprawling tree.  Adding pubs and cafes as nests or hanging fruit seemed natural after that.” 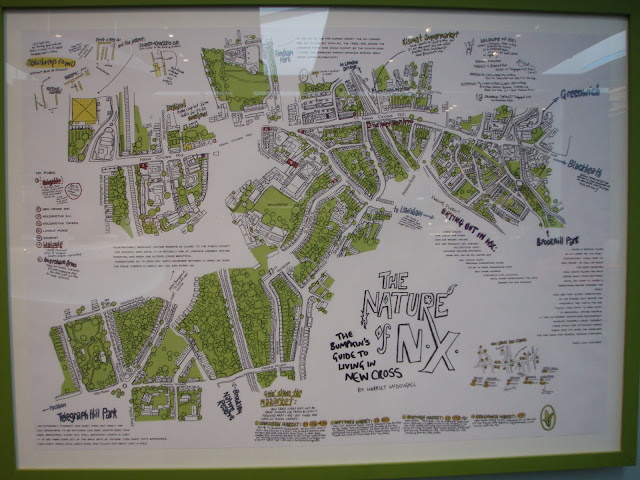 The Nature of New Cross – by Harriet McDougall.  Reproduction injet on paper.  “In this map I set out to discover the hidden countryside of New Cross as a gift to a guy in my class who came from the same part of the countryside as me.  He was feeling homesick and overwhelmed by the urban sprawl he found himself in.” 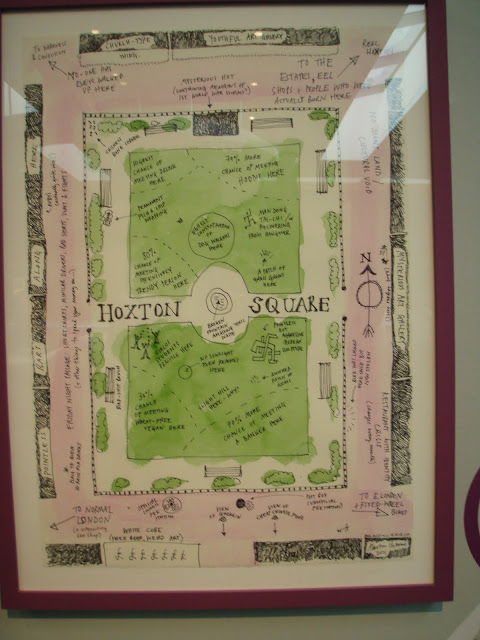 Hoxton Square – by Martin Usborne.  Pen and watercolour on paper.  “Ive lived in Hoxton Square for seven years and so Know it too well!  I love the creativity and energy of Hoxton but not the noise, mayhem, and pretentiousness.  Whatever you feel about Hoxton Square it’s hard to ignore it.” 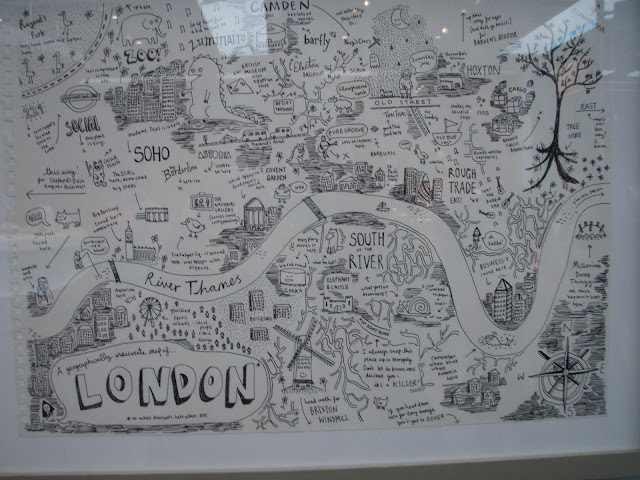 A Geographically Inaccurate Map of London. 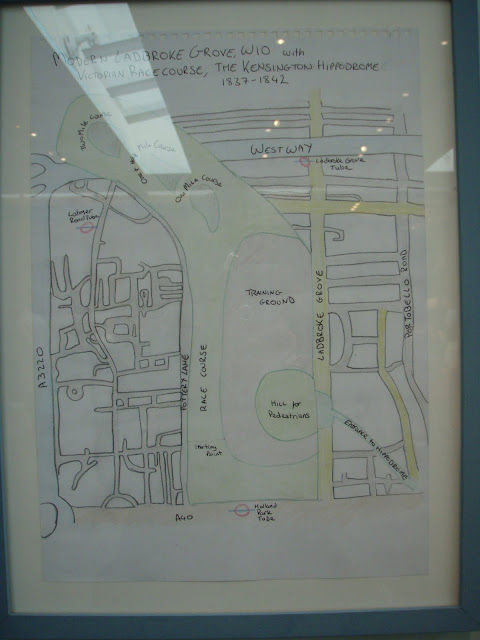 Kensington Hippodrome in Contemporary Ladbroke Grove – by Kathleen McIlvenna.  Pencil and pen on paper.  “Growing up my father always used to tell me that there used to be a racecourse in Ladbroke Grove.  The idea from this map, superimposing the old Victorian racecourse onto a modern-day north Kensington, came from a childhood image I had of horses thundering down modern roads.” 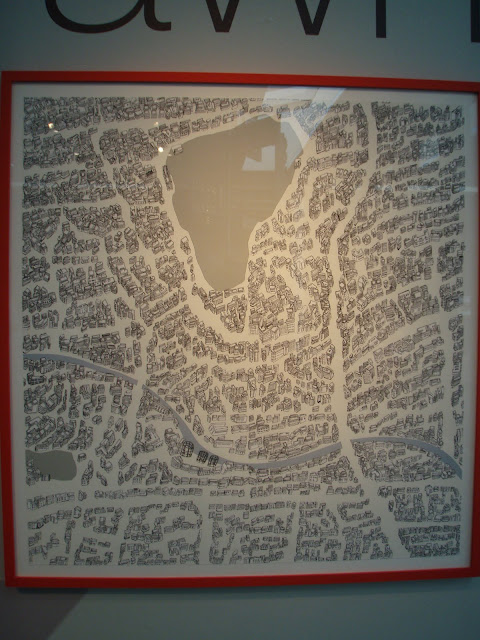 Subjective Mapping – by Alexander Schmidt. Giclee print on paper.  “I live in Hackney and love mapping.  This map combines reality, but filtered through memory, creating a mish-mash of the textures and facades of the houses, providing a different sense of space from a conventional bird’s eye view map.” 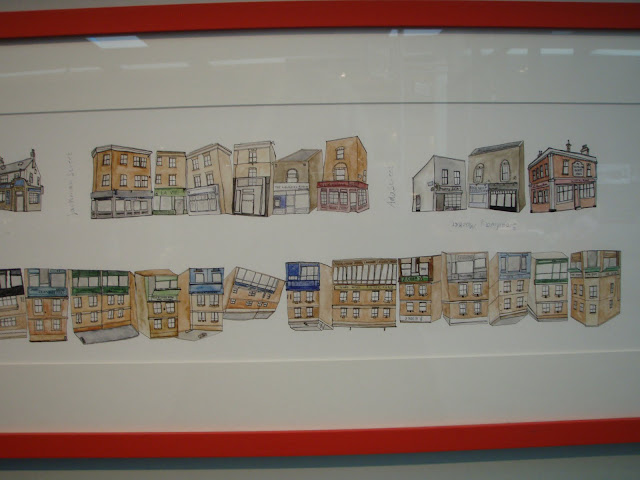 Broadway Market – by Alexander Schmidt.  Pen and watercolour on paper.  “This panel shows a zoomed-in view of just one street from my larger map.  I’ve tried to convey the colour and vibrancy of one of the liveliest streets in the borough of Hackney.”
Posted by Map Monkey at 8:50 AM