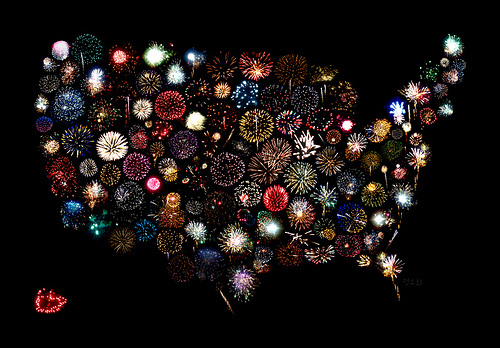 United States Fourth of July Map
“Fireworks and firecrackers are always associated with positive occasions in life.  It is associated with joy, victory, happiness and celebrations.  Witnessing the colorful and iridescent burst of fireworks is a joy in itself.  It creates a lively atmosphere.  It sets the sparks of happiness and fun flying in our hearts and minds.”
What says Fourth of July better than fireworks?  (OK, maybe waving the American flag a little bit, and some tofu burgers on the grill!).  We had our little fireworks display up here at the lake last weekend, (we do it early, to avoid the higher price the pyrotechnics company charges on July Fourth weekend) and I have to say, for a small bungalow community, it was pretty spectacular.  I got real up-close and personal with the fireworks display, got a stiff neck from craning skywards, the ringing eardrums, and (always the best!) lungfuls and eyefuls of the toxic smoke!  That’s how close I was (I don’t claim that this was a smart thing to do, btw!)  But it was worth it!

Brief History of Fireworks
Fireworks, it is widely believed, originated in China about 2,000 years ago.  There are various stories about who invented them, but one version claims it was done accidentally by an anonymous cook who mixed charcoal, sulfur, and saltpeter.  He then stuffed the mixture in a bamboo tube, and an explosion occurred (what the devil was he really doing?).  Anyway, that was the world’s first firecracker.  Another story credits their invention to Li Tian, a monk, and on April 18th every year, the Chinese people celebrate (with fireworks, of course) and offer sacrifices to him in thanks for his creating fireworks.  A minority opinion is that fireworks were first created in India.  Fireworks in both Indian and Chinese civilization are regarded effective in warding off evil spirits, darkness and despair.  Both cultures use fireworks extensively in birthdays, marriages, and festivals.  China is also the world’s largest manufacturer of fireworks and the Liu Yang region of Hunan Province is famous for its production.  To this day the Liu Yang region remains the main production area in the world for fireworks. 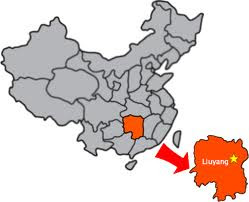 Liu Yang,in China’s Hunan Province, the world’s fireworks production center.
History of fireworks video (2 minutes)
http://www.history.com/videos/modern-marvels-the-origin-of-fireworks#modern-marvels-the-origin-of-fireworks
It is said that Marco Polo brought fireworks back to Europe.  Some say that it was the Crusaders.  Either way, they quickly became popular in Europe, (and of course, the Europeans didn’t use them just to mark celebrations, but from the fireworks technology, developed the rudiments of gunpowder and firearms).  By the 16th century, fireworks had become so culturally entrenched that Shakespeare mentioned fireworks in several of his plays, and Queen Elizabeth I created a position for a “Fire Master.”  In later years, King James II, who was said to be fascinated with the display of fireworks, knighted the fire master.  Fireworks were used to commemorate important events and military victories. 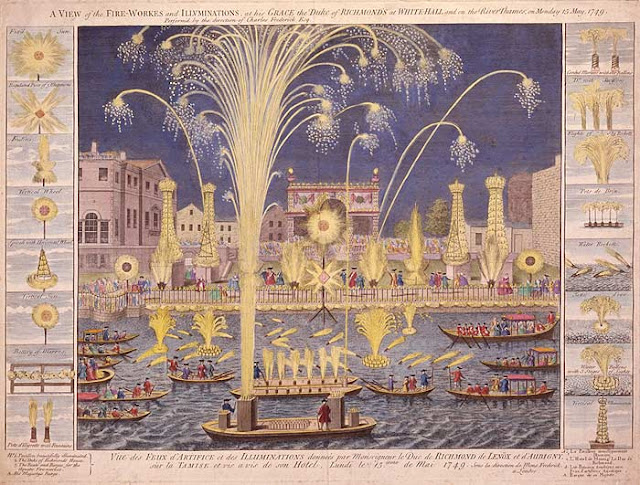 “A view of the Fireworks and Illuminations at his Grace, the Duke of Richmond’s at Whitehall and on the River Thames on Monday, 15 May, 1749.  Performed by the direction of Charles Fredrick Esq.”  Hand coloured etching showing the Royal Fire-workes and Illuminations in Whitehall and on the River Thames on Monday 15 May 1749.  The occasion for which George Frideric Handel composed his Music for the Royal Fireworks.  The firework display was for the benefit of King George II of Great Britain to celebrate the signing of the treaty at Aix la Chapelle in 1748 marking the end of the War of Austrian Succession.  Unfortunately, during the display, one of the fireworks landed on the pavilion of the Temple of Peace, igniting the several thousand fireworks inside and killing three spectators. 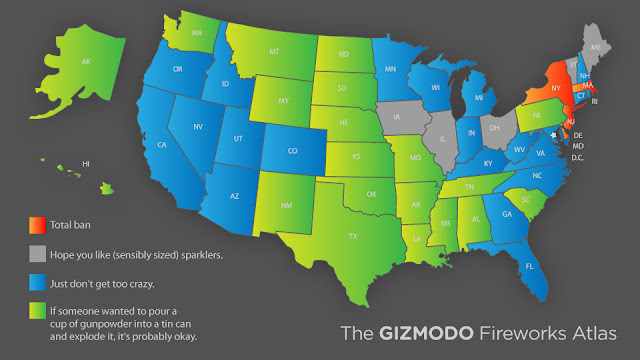 Fireworks Atlas from Gizmodo
“If you're really into fireworks, maybe you should move your butt to any square state. But whatever you do, don't move to New York, New Jersey, Delaware or Massachusetts.  They have a total ban.  The awesome-est state is South Carolina.  There they have prohibited any small rockets less than 3 inches long and half an inch thick.  That's right: They have a ban on ridiculously sized fireworks.  The nation's capital is, ironically, the lamest when it comes to celebrate the 4th of July.  It doesn't have a total ban, but look at their description: Prohibited products include, but are not limited to, ‘firecrackers of any kind of description.  Any fireworks that explode [...] or intended to move after the piece is placed and fires.’  Really, Washington DC?  REALLY?”  from: http://gizmodo.com/5817575/where-to-get-the-best-fireworks-in-america
In the United Sates of my youth, the southern states were where literally anything goes as far as fireworks purchasing by ordinary citizens.  On the northern border of Virginia, I remember always seeing these little shacks and sheds as we drove by that advertised themselves as being the last place to stock up on fireworks (and cheap cigarettes).  In New York City where I grew up, it was much more difficult to obtain them, and certain types were illegal, although I’m not sure if they were all banned outright the way they are in New York today.  Back in those days, (summers at the lakehouse) we had a neighbor and family friend who was a NYC police officer, and every year he would put on a really good show in the neighborhood of all the NYPD-confiscated fireworks.  No one thought this was ironic in any way, because “he knew what he was doing.”
Whatever the legal status of fireworks in New York, it has never prevented people from obtaining and firing off rounds of celebratory explosives.  I can recall walking home through the East Village from the official (Macy’s) fireworks display along the East River and having thunderous firecrackers raining down on us from the rooftops of tenements.  And people setting off bottle rockets from the rooftops, too. It was like walking through a war zone.   I have to admit to some indiscretion in this account too, although it didn’t occur on Fourth of July, but rather on Bastille Day, many moons ago.  A friend (who had access to confiscated materials that had been transported inter-state) and I went to the roof of my Far West Village townhouse and at around 1 AM decided that we would set off the fireworks, watch the pretty colors, and no one else would notice.  Wrong.  Unbeknownst to us (because we were in the middle of the roof and not at the edge) a huge crowd had gathered on the corner below to watch the display, the police eventually came, found us on the roof (it was a very hot and muggy NYC night, so we were slightly under-dressed for the occasion.  We really didn’t expect to draw a crowd!  Far less the police!  I know, I know, what were we thinking?).  They reprimanded us, (Dutch-Uncle stylee, not police stylee) but they actually allowed us to finish off the fireworks and then they dispersed the crowds.  Those were the days! 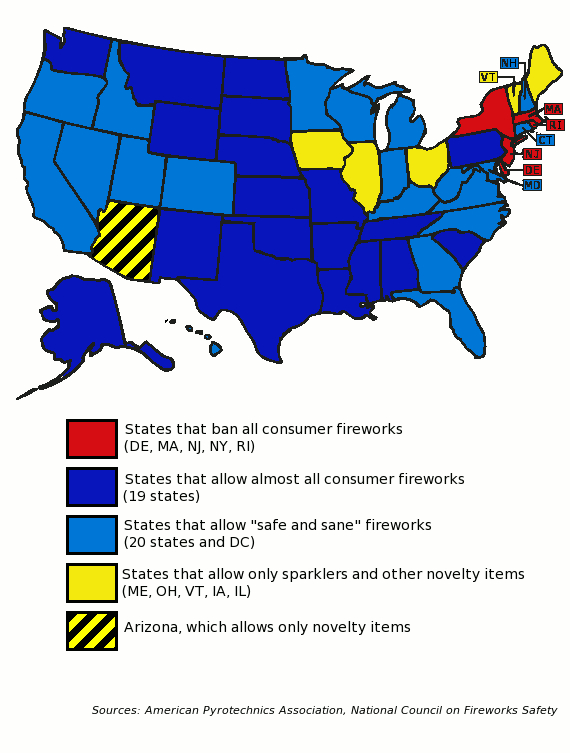 Another map of the legality of fireworks, by state
Toxicity Issues and Typology of Visual Effects of Fireworks
There are many chemicals used in the manufacturing of fireworks like Aluminum, Barium, Carbon, Calcium, Chlorine, Copper, Iron, Potassium, Lithium, Magnesium, Sodium, Oxidizers, Phosphorus, Zinc, among others.  Aluminum is chiefly used in sparklers for silvery white sparkles and flames while Barium is used to create a green color.  Carbon works as a propellant and copper emits a blue color to the fireworks.  Each chemical plays an important part in the reaction and the desired effect and movement is produced according to the proportion of the chemicals and the shape and design of the firework.  Some of the chemicals used are toxic, and exposure can be dangerous.
Common fireworks (Aerial Effects) are the Peony, the Chrysanthemum, the Willow, the Palm, the diadem, the ring, crossette, horsetail, spider, and time rain.  There are also ground displays, where the fireworks are not shot into the air, but burn/explode on wooden structures, such as spinning wheels.  The Peony is the most common shell type of the aerial effects, described as “A spherical break of colored stars that burn without a tail effect.”  The chrysanthemum is “A spherical break of colored stars, similar to a peony, but with stars that leave a visible trail of sparks,” and the Willow is similar, “but with long-burning silver or gold stars that produce a soft, dome-shaped weeping willow-like effect.”

Where to see 'em 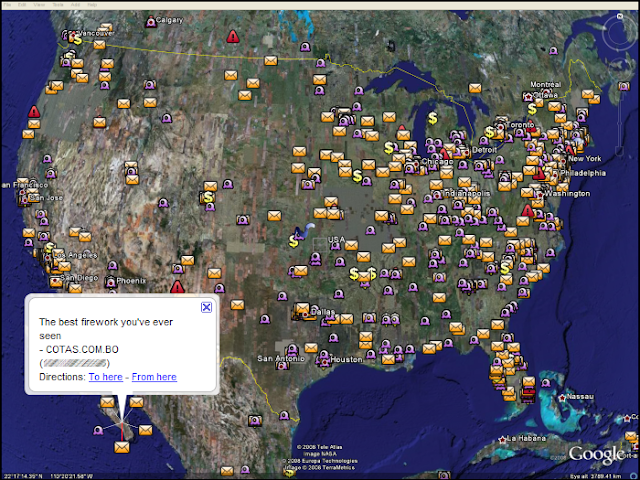 A google map project where people can enter their fireworks location and photos of the event. 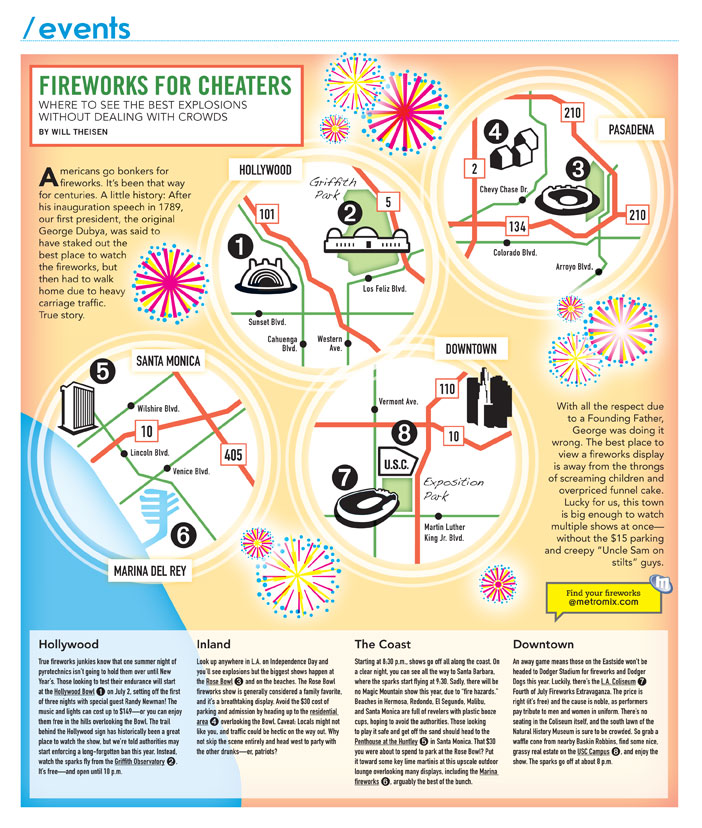 This is a clever map graphic “Fireworks for Cheaters,” for those who want to see the fireworks but avoid the crowds (in the Southern California area).
Posted by Map Monkey at 11:47 AM

Email ThisBlogThis!Share to TwitterShare to FacebookShare to Pinterest
Labels: fireworks, fourth of july