My visit to the Royal Geographical Society 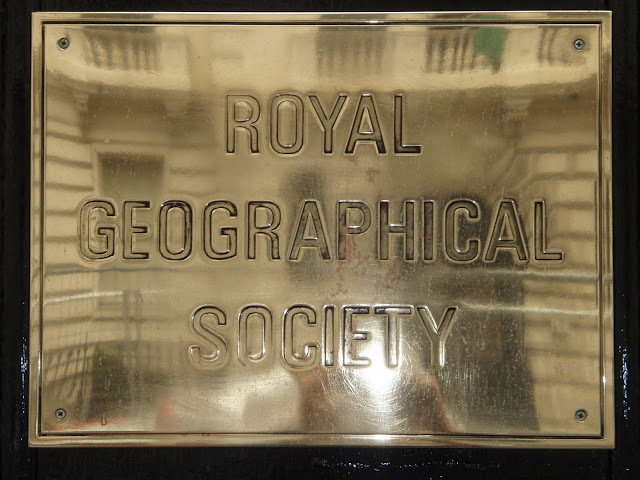 The Royal Geographical Society brass plaque on a large sturdy double wooden door – no, surprisingly, this is NOT the entrance! (although it may have been at one time)
Lastly, but certainly not least in my travels to England, was my visit to the Royal Geographical Society in London, established in 1830 to promote the advancement of geographical science, and counts amongst its Fellows some of the most illustrious explorers and geographers of the past nearly two centuries, including Charles Darwin, David Livingstone, Henry Morton Stanley, Robert Scott, Ernest Shackleton, Richard Burton, and Edmund Hillary.  Although the history of the Society was closely linked to colonial exploration in its early years, having absorbed both the African Association and the Palestine Association, the Society's current mission is to be at the forefront of geographical research by funding contemporary geographical research projects rather than major exploratory expeditions, a recent move that proved quite controversial amongst some of its Fellows.
The Society’s headquarters is right outside Hyde Park, on Exhibition Road (just down the street from the Natural History Museum, the Science Museum, the Royal Albert Hall, the Imperial College London, the Victoria and Albert Museum of art and design, and many other cultural institutions - kind of like Fifth Avenue’s Museum Mile in NYC).  Exhibition Road was so named at the time of the Great Exhibition of the Works of Industry of All Nations in Kensington Gardens/Hyde Park in 1851, (you know, the one with Joseph Paxton’s famous “Crystal Palace,” that set the bar for World’s Fairs ever since).  The Road is all under construction right now, in a transformative effort to make the area a world class tourist attraction (in time for the London Olympics 2012).  Apparently the design recently won the New London’s Place-making Award.  See http://www.rbkc.gov.uk/subsites/exhibitionroad.aspx 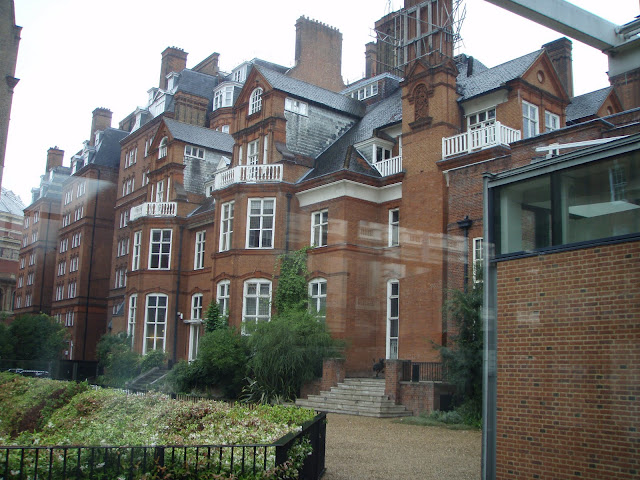 The RGS Headquarters, view from the courtyard
The RGS headquarters are steeped in history, and it was more than slightly awe-inspiring to wander around the halls where so many “onlys” and “firsts” were casually displayed.  Amongst the things I found pretty amazing to see were the following:
§  The Matteo Ricci world map, created in China in 1602.  This map was highlighted in my post about the Method of Loci – the Memory Palace.  The one here at RGS is the original!  See http://geographer-at-large.blogspot.com/2011/06/method-of-loci-memory-palace.html
§  “The World on Mercator’s Projection, by Judicus Hondius, 1608, the only example known, Purchased by the Royal Geographical Society in London, 1919.”  So says the brass plaque affixed to the frame.  Just hanging in some under-lit random hallway!
§  “The World on the Stereographic Projection, by Joan Blaeu of Amsterdam, 1650, the only complete example known, Presented to the Royal Geographical Society by Lieut. Gen. Sir Arthur Paget, GCB, in 1920.” 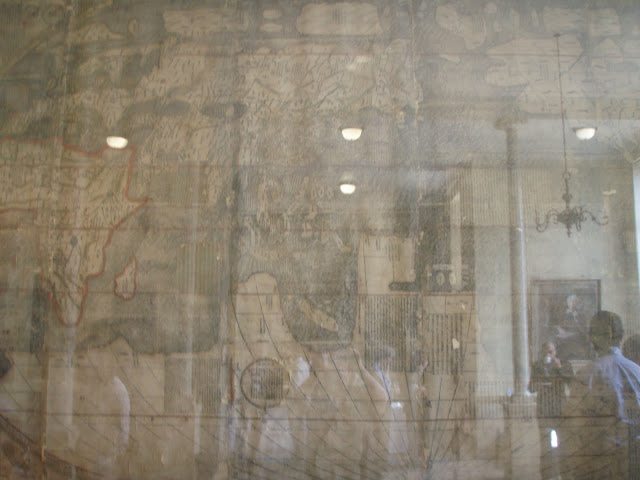 The 1602 Ricci map, barely visible in this photo behind VERY reflective glass, incorporating and replicating the image of Fellows drinking tea under the portrait of Sir Edmund Hillary across the room. 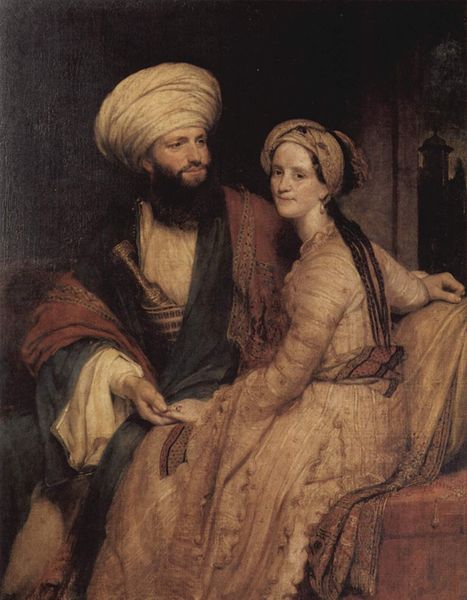 There are also many portraits of eminent and lesser-known Fellows of yesteryear - in the Tearoom, for instance, just casually hanging above the table with the coffee pots, is a wonderful oil painting of a Fellow and his wife in “Arabian dress” - James Silk Buckingham, and his wife Elizabeth Jennings, labelled on the frame as: “James Silk Buckingham, traveller and author, 1786-1855 & his wife in Arab costume of Baghdad in 1816.  Painted by H.W. Pickersgill, R.A.  Presented by H. Swayne Drewry, Esq. 1916.”
I have no idea if this guy Buckingham (1786-1855) was a typical RGS Fellow, but I would like to think he was!  He was the son of a farmer, went to sea at age 10, was a prisoner of war in 1797 (when he was 11!), lived in India and all over the world, for that matter, toured the U.S. and Canada at a time when traveling in the New World was precarious, to say the least, (and he wrote several volumes on America, including “Slave States of America,” and “America: Historical, Statistic, and Descriptive”).  He founded and published a famously liberal and anti-East India Company newspaper in Calcutta (which got him into big trouble with the powers-that-be), wrote travel guides about the Arab world, was at one point a Member of Parliament for Sheffield (for five years), was an economic, social, and political reformer, strong anti-slavery advocate, promoted the repeal of the Corn Laws, abolishment of press-gang practices and flogging in the Navy.  Plus, of all things, he developed plans for a Model City!  (“National Evils and Practical Remedies with a Plan for A Model Town,” published in London by Peter Jackson, 1849.)  From what I can gather, his model town combines elements of Ebenezer Howard’s much-later Garden City design, and what we would today call “co-housing.”  And, best of all, medical services would be free, with doctors paid by the community, working to prevent disease rather than to cure it.  In all, a stand-up sort of person, in my estimation, and one I am proud to be in company with as a RGS Fellow!     http://www.library.cornell.edu/Reps/DOCS/buckham.htm for the Model Town info, general biographical info at http://www.archive.org/details/autobiographyofj01buck and http://www.xjt60.dial.pipex.com/id127.htm
As well, there are first edition books of the Fellows and other sundry memorabilia on display.  For instance: 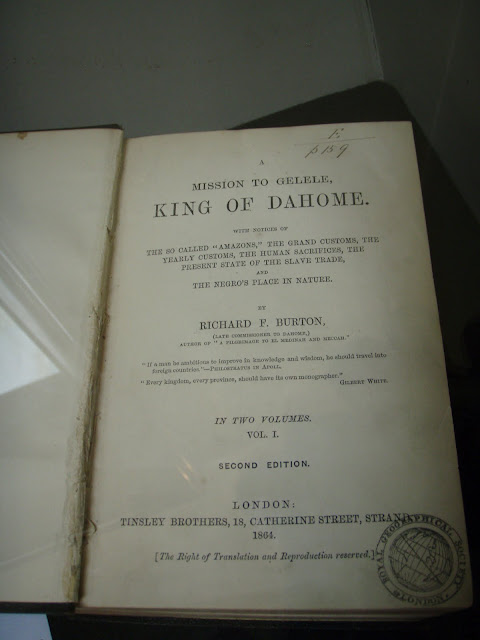 A Mission to Gelele, King of Dahome, The so-called “Amazons,” The Grand Customs, The Yearly Customs, The Human Sacrifices, The Present State of the Slave Trade, and the Negro’s Place in Nature,
by Richard F. Burton, (Late Commissioner of Dahome,)
Author of “Pilgrimage to El Medinah and Meccah”
“If a man be ambitious to improve his knowledge and wisdom, he should travel into foreign countries,” Philostratus in Appoll.
“Every Kingdom, every province, should have its own monographer,” Gilbert White
In Two Volumes, Vol. I
Second Edition, London: Tinsley Brothers, 18, Catherine Street, Strand
1864
Another amazing aspect of the Society’s headquarters is the Foyle Reading Room, where you can peruse the stacks containing past Society proceedings and journals, dating back to the early 1800’s – in their original editions.  One of the early goals of the Society was to collect information - maps, drawings, and later on, photographs – which then became part of the Society’s library.  It holds about 1 million maps, making it the largest private repository of maps in the world.  There are another million or more books, letters, photos, and artifacts, including Darwin’s pocket compass, David Livingston’s log book and manuscript maps, and slave chains he brought back from Africa.  You can check out the collections on-line at http://www.rgs.org/OurWork/Collections/Collections.htm , but in the Foyle Reading Room the staff will actually fetch many of the less fragile items for you to look at, up close and personal.
The RGS began admitting women as Fellows in 1913, this after many intrepid British women explorers had rather grudgingly been allowed to give talks in the Society beforehand, but not allowed to be elected as Fellows.  In a public debate in 1893 on the matter of admitting women as Fellows, (“Can a Lady be a Fellow?”) the then-President of the Society, Lord Curzon, stated: “We contest in toto the general capability of women to contribute to scientific geographical knowledge.  Their sex and training render them equally unfitted for exploration, and the genus of professional female globe-trotters with which America has lately familiarised us is one of the horrors of the latter end of the nineteenth century.”  Meanwhile, Mrs. Bird-Bishop, having just returned from her expedition to Tibet in 1892, was invited to speak at the RGS, and refused, on the grounds that she would not speak in any venue that would not receive her as a member.
“Women travelers are not supposed to become experts on fish (as Mary Kingsley did), or discover unknown mountain chains (as Fanny Bullock Workman did), or provide statistical information about a country (as Isabella Bird-Bishop did),” from Sarah Mills, 1993, “Discourses of Difference: an analysis of women's travel writing and colonialism.”  The irony of this ban on women RGS Fellows, of course, is that the mid- to late-19th century was the golden age of women explorers and geographers.  See http://victorianresearch.org/wtravelbib2003.pdf for a bibliography of women travel writers from 1837-1910.  I guarantee you will be surprised. 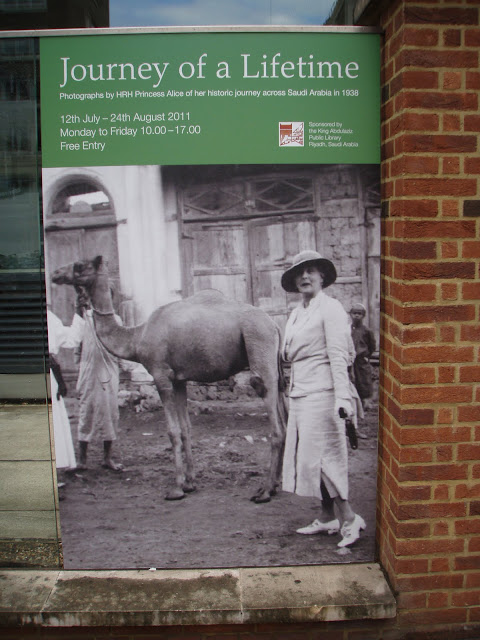 At the moment, the Society has mounted a very interesting exhibit of photos taken on the historic visit in 1938 of Princess Alice and her husband, the Earl of Athlone, to Saudi Arabia, (which had just become a nation a few years earlier).  Britain, of course, figured in this story of nation-building by supporting the Sauds against their Ottoman overlords in the Arab Revolt of 1916-1918, while the British were fighting the Turks anyway in WWI.  (You may be familiar with a well-known part of the story – T.E. Lawrence, the dashing British officer known as Lawrence of Arabia, who led the Arab Revolt against the Turks, and was immortalized in the 1962 David Lean/Peter O’Toole film.)
While in the Society’s Tearoom on my recent visit there, I sat near two older lady RGS Fellows, who were having a conversation about where to travel next.  The one started off by saying “well, if I’m still alive next year, I’d like to go to ….”  That’s the spirit!  Always make plans to travel, regardless of how old you are, as long as you can still move about!
Posted by Map Monkey at 8:47 AM