The World of Seven Billion 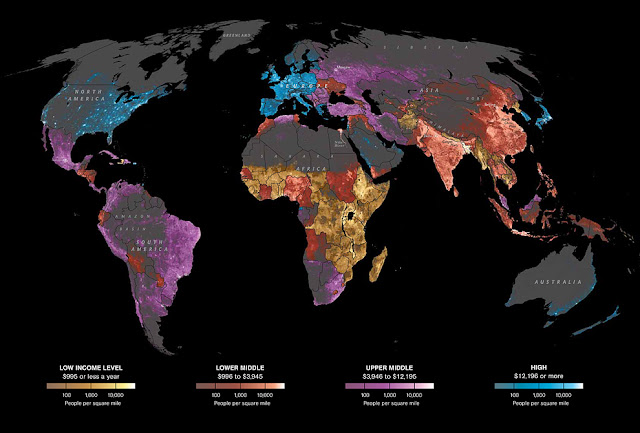 This is a very interesting analysis (thanks, Kristen Grady, for sending the link!) which takes the nations of the world and divides them up into four categories, based on mean income, and then plots the national population by population density per square mile.  It then looks at health and quality-of-life variables - again, divided up by these four economic categories: life expectancy, deaths of children under the age of five, access to improved sanitation, deaths from infectious diseases, years of education, literacy rate, fertility rate, population increase rate, migration rate, urban population, telephones, Internet users, computers in household, cars, and carbon emissions.
The graphics are beautiful, but tell a story of a starkly divided world, highly differentiated, not so much into the “haves” and “have-nots,” but something much more nuanced and complicated.  Still, the main take-away message is that most of the people in the world (4 billion) fall into the second to the lowest income category (from $996 to $3495 per year) and, along with those in the very lowest income category (1 billion), bear most of the burdens of disease, low life expectancy, childhood mortality, and have the fewest of the benefits or ostensible benefits (computers, cars, telephones, higher literacy rates, longer life expectancy, access to improved sanitation, etc.).  Those in the highest income category (1 billion) who do enjoy these benefits to a large degree, also, naturally, have the highest levels of carbon emissions, even though it is precisely those lower-income countries that are most likely to be negatively impacted by the effects of global climate change caused by excessive carbon emissions.  See the National Geographic website for the maps, etc., at http://ngm.nationalgeographic.com/2011/03/age-of-man/map-interactive
The video “How big is Seven Billion” can be seen here:
http://video.nationalgeographic.com/video/player/specials/sitewide-redesign/ngm-7billion.html
Of course, as with any statistical information compiled and mapped on the national level, much is obscured: the intra-national differences in income and other variables within countries.  This is evidenced by the well-known map of the Los Angeles area showing infant mortality rates of different neighborhoods by naming the countries that had similar rates.  Parts of LA had rates that were similar to Bangladesh, and parts were similar to Sweden’s rates.  Although I can not locate that particular map at the moment, here are a couple of maps that I found in a similar vein, which point out one of the major problems with dealing with national scale data – it masks what are sometimes huge differences within countries, especially large countries like the U.S. that have large inequities amongst its regions and sub-populations. 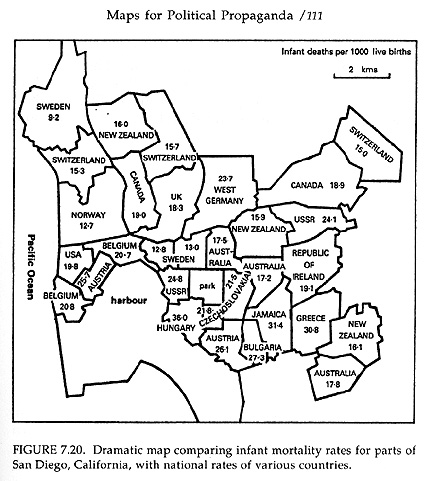 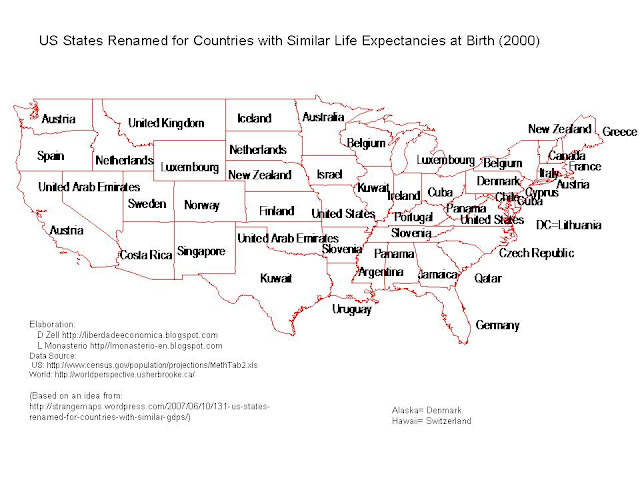 life expectancy map - Please don't focus on the strange (non-) projection!!
from: http://bp0.blogger.com/_I9BUG8mE0lI/RnKla5ZZZ1I/AAAAAAAAAkw/tjDvPdFiXyw/s1600-h/USLifeExpectancy.jpg
Also, in the National Geographic’s year-long population series,
“Enter the Anthropocene—Age of Man
It’s a new name for a new geologic epoch—one defined by our own massive impact on the planet. That mark will endure in the geologic record long after our cities have crumbled.”
http://ngm.nationalgeographic.com/2011/03/age-of-man/kolbert-text
Posted by Map Monkey at 9:01 PM