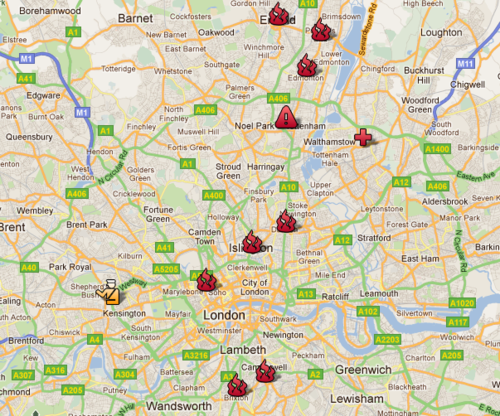 Locations of some of the violence in the London environs, August 2011.
OK, after my very extremely civilized time in London a couple of weeks ago, all hell has broken out, and I really don’t know what to make of it all.  I have e-mailed my friend in London, Natalia, who lives in Brixton and works in the City, mainly to find out if she is OK, and get her take on what is going on.  Her response was not reassuring, including an anecdote about a youth’s threatening behavior towards passengers on the train she was on, and her packing up what we in NYC after 9/11 called a “go-bag.”  Not cool. And as usual, the media in this country are not telling us any useful information. 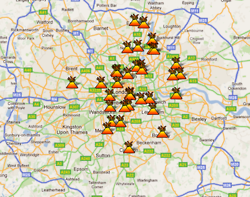 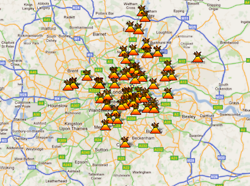 Oh, and this just in, an interesting essay appeared yesterday in the blog New Geography at http://www.newgeography.com/content/002376-britain-needs-a-better-way-get-rich-than-looting?utm_source=feedburner&utm_medium=feed&utm_campaign=Feed%3A+Newgeography+%28Newgeography.com+-+Economic%2C+demographic%2C+and+political+commentary+about+places%29

Britain Needs a Better Way to Get Rich Than Looting
Posted by Map Monkey at 9:17 PM