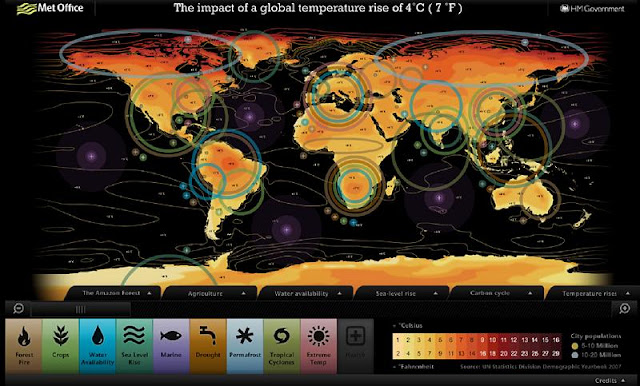 This map was produced by the Met Office, the UK’s National Weather Service.  See the interactive version at: http://www.metoffice.gov.uk/climate-change/guide/impacts/high-end/map
“In order to understand more about the human impact of high-end climate change, the Met Office Hadley Centre has produced a map outlining some of the impacts that may occur if the global average temperature rises by 4  C (7  F) above the pre-industrial climate average.
Although the average temperature rise over the globe is 4  C (7  F) the projection on the map shows that this average rise will not be spread uniformly across the globe.  The land will heat up more quickly than the sea, and high latitudes, particularly the Arctic, will have larger temperature increases.  The average land temperature will be 5.5  C above pre-industrial levels.  The map was produced by the Met Office (on behalf of HM Government), but contains contributions from climate scientists from other institutions conducting the latest research on climate impacts.  You can view it as an interactive map online or as a layer on Google Earth.
The impacts on human activity shown on the map are only a selection of those that may occur, and highlight the severe effects on water availability, agricultural productivity, extreme temperatures and drought, the risk of forest fire and sea level rise.
The impacts shown on the map are frightening, and the list is not exhaustive.  However, the map represents a world where climate change has gone unmitigated, where we have continued to emit greenhouse gases at the rates we are today.  If we continue to do this, then the likelihood of the planet warming by 4  C (7  F) increases, and as it does, so the risk of these impacts being realised also increases.
By taking strong and effective action to curb greenhouse gas emissions, it may be possible to limit this temperature rise to 2  C (4  F).  Although this would still bring some adverse impacts, the risk of the very severest impacts, as shown in the Met Office map, is significantly reduced.” From: http://www.metoffice.gov.uk/climate-change/guide/future
Download the 4o Google Earth climate change map at:
http://www.metoffice.gov.uk/climate-change/guide/future/google-earth 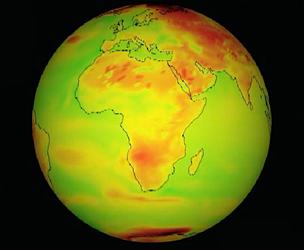 Predicted Temperature Rise Relative to Pre-Industrial Levels - The globes show the latest results from the Met Office's climate change research.  The data are based on a mid-range IPCC emissions scenario A1B.
“The computer climate models used for the majority of the work at the Met Office Hadley Centre are detailed three-dimensional representations of major components of the climate system.  They are mostly run on the Met Office's supercomputers.  As part of the Met Office's Unified Model, the atmosphere component of the climate model represents the same physical processes as that used for operational weather forecasts.  However, due to the longer timescales involved in climate prediction, other components of the climate system are added including:
·         three-dimensional representation of the ocean and sea ice;
·         an interactive carbon cycle model;
·         interactive atmospheric chemistry models;
·         the coupled atmosphere - ocean - carbon-cycle - chemistry model is known as an earth system model.
For both weather and climate prediction, the Met Office also runs its models at higher resolution over particular regions.  Currently regional climate models are typically run at 25 km resolution.”  From: http://www.metoffice.gov.uk/climate-change/guide/future/projections
Posted by Map Monkey at 4:41 AM