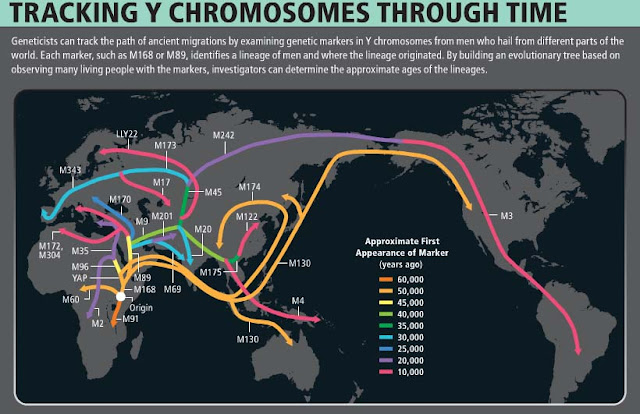 Tracking Y Chromosomes Through Time, from the magazine “Natuurwetenschap en techniek,” Oktober 2009
Here’s an immigration map of a different type – it traces the migration of earliest modern man (in this case, literally “man” and not woman) out of East Africa, which has been shown to have been the birthplace of homo sapiens - or “wise man” - (and more than likely earlier incarnations of hominids, as well).  So, we are all Africans originally, it’s just a matter of how long ago we left our first homeland.  According to this map, which is based on a study of Y chromosomes in contemporary men, Australian aboriginal people were among the first to leave the African continent, and Europeans and those who ended up on the American continents were amongst the last to leave (or at least, amongst the last to arrive at their eventual destinations).
I added this map as a coda to the blog posting Map of the Week 2-20-2012: Ancestry and Immigration,  http://geographer-at-large.blogspot.com/2012/02/map-of-week-2-20-2012ancestry-and.html after I received a comment from a reader asking (basically) how hate groups could so willfully ignore the truth that we are all Africans under the skin.  This is my response:
Greetings, and thanks for your comment.  I agree that the best scientific evidence we have points to an East African origin for all humankind.  There has been not only forensic/fossil/archaeological evidence, but also solid research on genetic markers showing us our origins.  Reasonable and well-informed people do not doubt this any longer.  Your second statement that members of hate groups are “rather ignorant” is putting it mildly!  I think they are a great deal more than “rather” ignorant, and they are also extremely dangerous to the rest of us.
Unfortunately, just showing people facts and evidence does not ensure that it will be believed, as witnessed by many current scientific debates right now, such as global climate change.  Heck, a lot of these people don’t even believe in evolution, or the vast age of the Earth, and they maybe only just got around to believing that the Earth is not flat and the sun doesn’t revolve around the Earth!  Some still think that man was created in the Garden of Eden in the middle east and woman was fashioned from the first man’s rib, and that the creation of the world can be precisely identified as having occurred 6,000 years ago, based on a calculation of all the begetting and begatting in the Old Testament of the Judeo-Christian Bible! (see, for instance, http://www.nwcreation.net/ageyoung.html for creationism's defense of the "young Earth" theory.  Astounding!)  Many of these people think it is against Church doctrine to believe in evolution – they staunchly deny and are offended by the idea that humans are descended from monkeys, even though of course the principles of evolution have never claimed any such thing.  So to get these people to understand that we (humans) all belong to the same species, and that race is a societal construct is probably asking too much at this time. In any event, acknowledging the origins of something doesn't necessarily mean you don't end up hating it, despite the knowledge.  Didn't Christianity originate out of Judaism?  Wasn't Jesus a Jew? Didn't Islam have strong links with both Judaism and Christianity?  Aren't Jesus, Abraham, and Moses prophets in the Qur'an? Did this ever stop Muslims, Christians, and Jews from holding the other groups in contempt?
For some odd reason, some people feel the need to hate.  It doesn’t necessarily involve race (although it usually does), and it oftentimes extends to hatred of foreigners, immigrants, people of other religions, other sexual identities, different lifestyles, different political views, you name it.  And then there is the big one - hatred of women.  There are whole areas of the world where women are suppressed in every imaginable way (and in some unimaginable ones) and sex is used as a weapon against them.  I have added another map to the blog posting that shows our exodus out of Africa, based on genetic markers.  I think it is an important addition to a post about ancestry and immigration, so thanks for spurring me to add it. 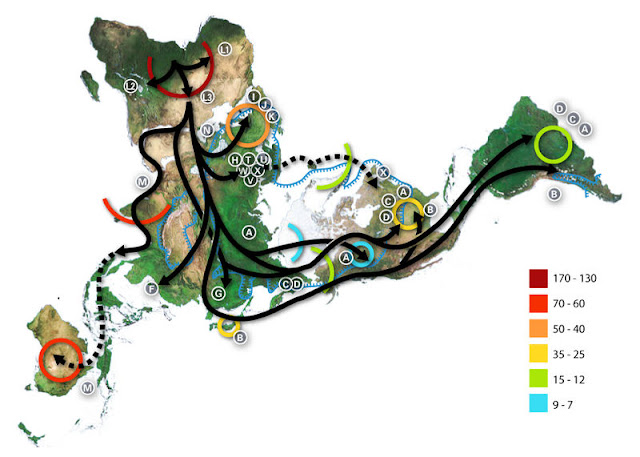 Here’s another one showing our dispersion out of Africa, based on tracing the mitochondrial DNA, from: http://www.mitomap.org/WorldMigrations.pdf
This is a world map of human migrations, with the North Pole at center.  Africa, harboring the start of the migration, is at the top left and South America at the far right. (Extra points to anyone who can tell me what kind of projection is used here!) Migration patterns are based on studies of mitochondrial (matrilinear) DNA.
Numbers represent thousand years before present.
The blue line represents area covered in ice or tundra or during the last great ice age.
The letters are the mitochondrial DNA haplogroups (pure motherly lineages); Haplogroups can be used to define genetic populations and are often geographically oriented.  For example, the following are common divisions for mtDNA haplogroups:
·         African: L, L1, L2, L3
·         Near Eastern: J, N
·         Southern European: J, K
·         General European: H, V
·         Northern European: T, U, X
·         Asian: A, B, C, D, E, F, G (note: M is composed of C, D, E, and G)
·         Native American: A, B, C, D, and sometimes X
Posted by Map Monkey at 5:19 AM