Oronce Fine was one of the rare French geographers in the Renaissance to prepare maps of the world. This map is bordered with a handsome Renaissance decoration: two columns support a pediment bearing a Latin inscription signifying “A new and complete description of the world,” interrupted in the middle by a coat of arms of France. Also to be noted is a vast southern land mass (Terra Australis), recently discovered but not yet explored.

Coming soon: a blog posting on mappae mundi.  (I know, I know, I still owe you guys posts on the evolution of the tenement form in NYC and also antique geography textbooks, as promised.  What can I say.  I am easily distracted.) 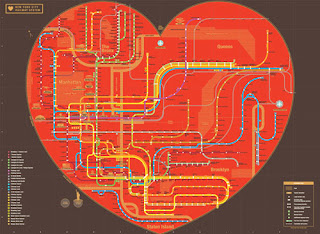 New York City's subway system in a heart! (of dubious accuracy!)
We heart the subways! 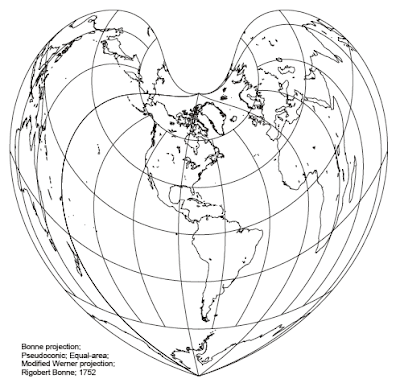 I added the Bonne Projection, left, in response to Gretchen's comments below.  Note the superficial similarity with the Orance Fine map on top.


HAPPY SAINT VALENTINE'S DAY!!!
(You had to know that I would work a TEDDY! picture in here somehow!)