The World's 10 Most Threatened Forest Hotspots 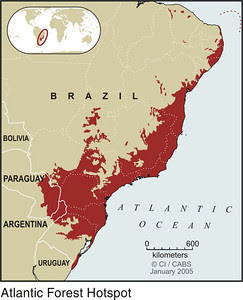 #5 in Conservation International's World’s 10 Most Threatened Forest Hotspots
“The Atlantic Forest stretches along Brazil's Atlantic coast and extends to parts of Paraguay, Argentina and Uruguay. Also included in this hotspot is the offshore archipelago of Fernando de Noronha and several other islands off the Brazilian coast. This hotspot boasts 20,000 plant species, 40 percent of which are endemic. Yet, less than 10 percent of the forest remains. More than two dozen Critically Endangered vertebrate species are clinging to survival in the region, including lion tamarins and six bird species that are restricted to the small patch of forest in northeastern Brazil. Beginning with sugarcane plantations and later, coffee plantations, this region has been losing habitat for hundreds of years. Now, with the increased expansion of Rio de Janeiro and São Paulo, the Atlantic Forest is facing severe pressure from the issues tied to urbanization. Over 100 million people and industries that make up the vast majority of the country’s economic output, including manufacturing, agriculture, cattle ranching and timber harvesting, are dependent on the remnant forest cover for their supply of fresh water”.  Courtesy of Conservation International (CI) as published in the New York Times on Feb. 2, 2011.
The accompanying blogpost-article in the NY Times.  Be forewarned, apparently there is a problem with the figures given for the square miles of forests, both for 8,000 years ago, and the current remaining forests.  Thanks, Holly Porter-Morgan, for sending the links!